Kinda handy to have a big CNC sitting there on your workbench! Things seem to be a lot easier with the corded router this time around as well. Little mention at the end as well. You know I cracked a big ol smile seeing this.

Check out the rest of the video, the printer is looking like it is going to be a slick project. 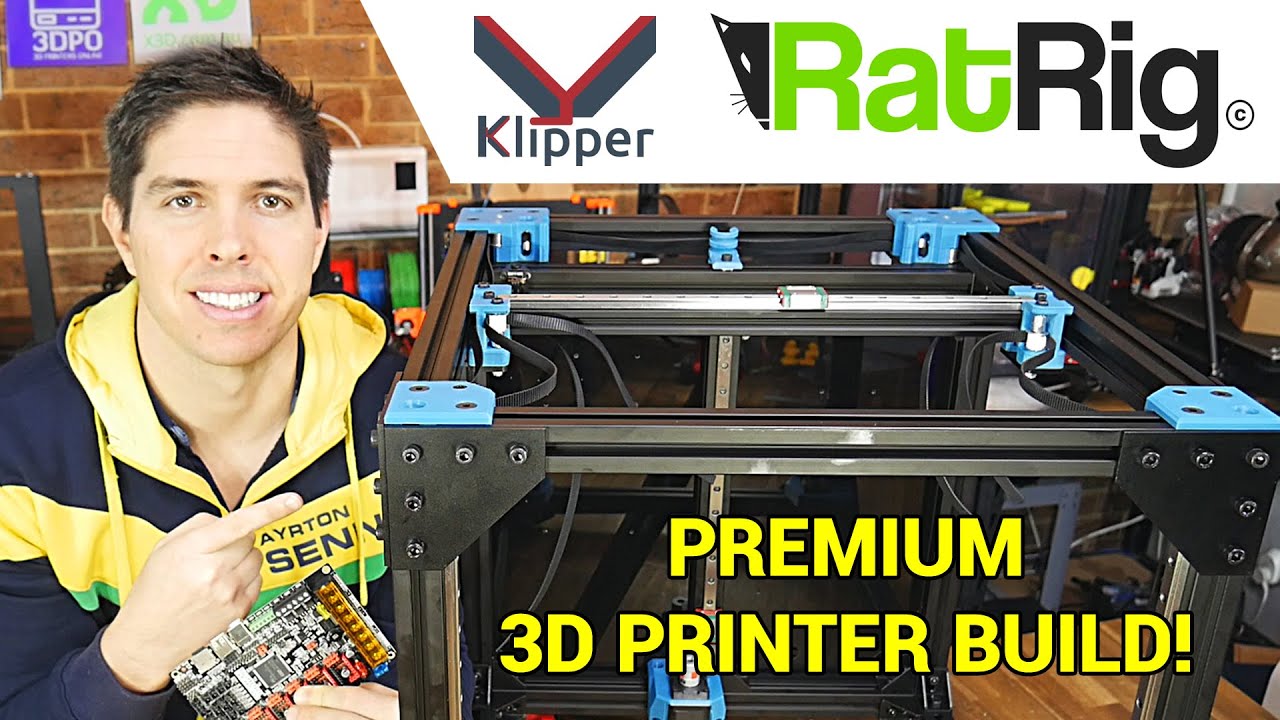 Someone needs to get that poor guy a taller shop stool!

That’s a great printer build video from @teachingtech. I love watching it come together like that in 20mins.

I thought maybe it was ACM, but it was acrylic. I need to give that a try sometime.

I was a little worried his LR was not functional, but clearly it is in good shape.

He said it was loose wiring, and it seemed to be fine after he fixed that.

The printer itself looks interesting, but looks like it would be pretty spendy to build. Extrusion is nice for what it is, but with a CNC, I wouldn’t think that I’d need it to get stuff like straight lines. I keep trying to develop my own CoreXY gantry, and get frustrated with my lack of ability to do what I want in CAD. FreeCAD doesn’t do well when you try to go back and change something a couple of pads or pockets back. Works fine if you know exactly what you want at the outset, but changing things a few steps back still breaks stuff. It makes it much more tempting to just use someone else’s design, but then you have to live with someone else’s design decisions, and bill of materials, which might not match otherwise perfectly serviceable materials that you have on hand.

I like the way the gantry puts one set of rails on the bottom. Dust seems to just love those rails. My gridbot also uses a rail for the X and that seems fine, but I bet the 2020 is a bit more rigid.

These designs are pretty flexible, which is why there are so many of them.

That build plate looks awesome. Maybe that will be my next upgrade in the far future. I don’t see the benefit of the 3 Z screws, but I know a lot of people like them.

I don’t see the benefit of the 3 Z screws, but I know a lot of people like them.

With something like the Duet, you can level the bed automatically with 3 motors like that. My printer with the Duet has 2 Z screws, and I have a macro that levels the gantry relative to the bed, which I run every time the motors power down. There’s typically an adjustment between 0 and about 0.15mm in order to level the bed, but if I’ve pushed something out of line, it has been up to a couple of mm. With 3 motors and the screw locations defined to the Duet, it can automatically adjust the bed to absolute level with respect to the gantry, at least as close as the flatness of the bed allows.

My designs have typically been with the rails inverted, but I either have to have a better idea of where I’m going at the onset (I’m getting closer) or else I need to bite the bullet and buy a CAD program that’s better at allowing changes to previous steps. I might have to re-think my abandoning of learning Fusion360. I’ve also been thinking about giving OnShape a try.

I get the theory I just don’t agree that it matters.

For the most part, I agree with you. Bed levelling done correctly, once should never need to be adjusted again. With a properly rigid frame and something to keep level consistent, it certainly should not matter. I won’t be going that route, less because I don’t think that it’s of benefit, and more because I don’t want to deal with the hassle of using 3 drivers for the Z axis.

My CoreXY designs have involved 3 screw bed support, but I was going to lock the screws into sync with belts, and drive them from 1 Z motor. If done well, and locked into synch with the belts, this should never need to be adjusted. Put good Z limit switch in place, and it shouldn’t need a Z probe, either, though with thermal expansion it seems to matter what you set the bed temperature to where exactly the zero point is.

My first attempt at a 3D printer, the mechanisms all worked great at 20-25°C but I started getting binding and the bed started warping at 70-75°C because it didn’t have enough allowance for thermal expansion. Everything ended up being over-constrained. Using 3 drivers allows for a little more looseness to the design, which should then reduce the necessary constraints, and in turn allow some freedom from the support rods, which will reduce problems like Z wobble.

Mostly though, I think it’s just become one of those things that a “premium 3D printer” needs to have as a feature, or else people will think that you’re making compromises to be cheaper at the expense of better. It does certainly allow use for those with less technical ability, so I guess that it does bring the 3D printer closer to the consumer electronics “press print, then wait.” state.

I don’t see the advantage over a mesh leveling system. It is going to be flat enough already that the software will give you a good first layer, and I doubt any output would matter on a SW leveled vs. a hardware leveled. I understand there are differences, but 0.05mm when it comes to payer adhesion, but not when it comes to total shape of the parts.

Depends on your layer height. I also don’t have to screw around with manual bed leveling screws and springs.

The Hevort, has a similar bed style (way more freedom though). The goal of that one from what I can tell is to be ready for non-planar printing.

I am very excited to build one of these they seem to be still innovating pretty fast though. The wobble wings of the Hevort are amazing and all printers have needed them for a long time. Leadscrews and linear rails are over constrained, the wobble wings fix that. The only “problem” for me with these bad Mama Jama CoreXY builds currently is the BOM’s are just overcomplicated. (like the LR BOM). So many Unique parts and fasteners.

(If I ever design one it needs to be called bad mama jamma…listen to the start of that song!)

If I didn’t build the railcore, the hevort was going to be my next printer. That thing is freaking sweet. 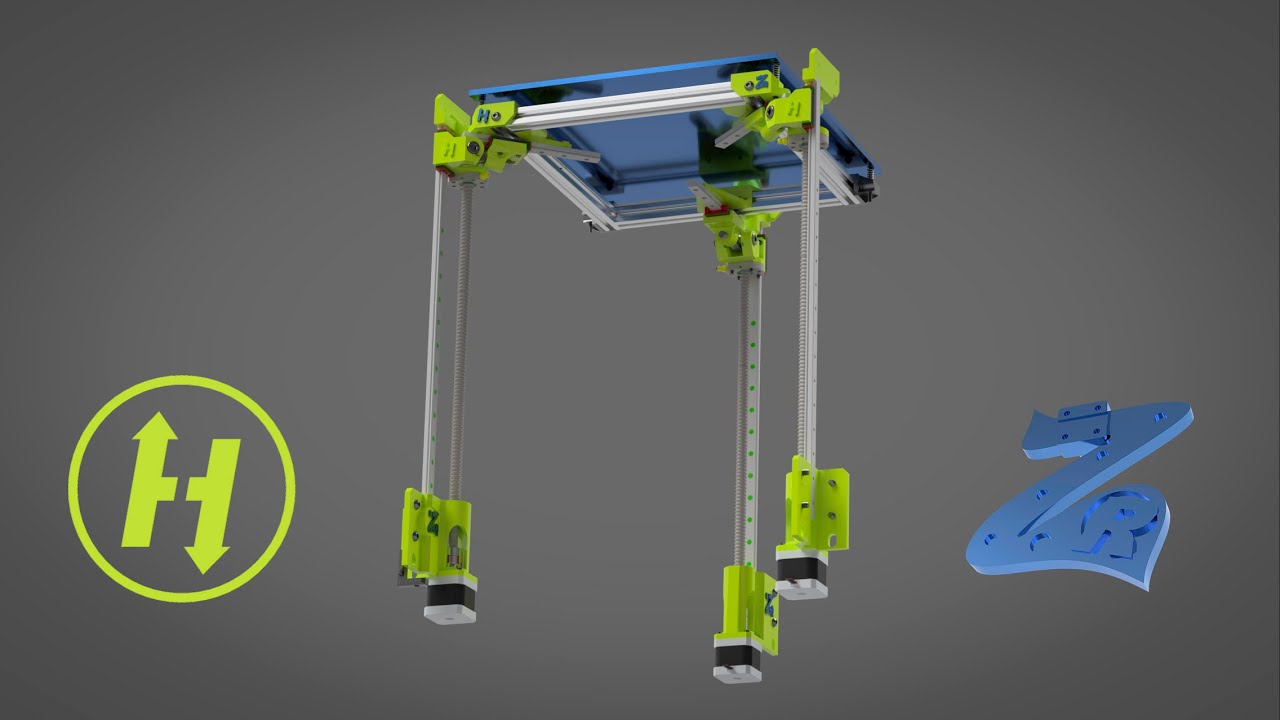 Look at the speeds this guy is getting! 314ish mm/s! 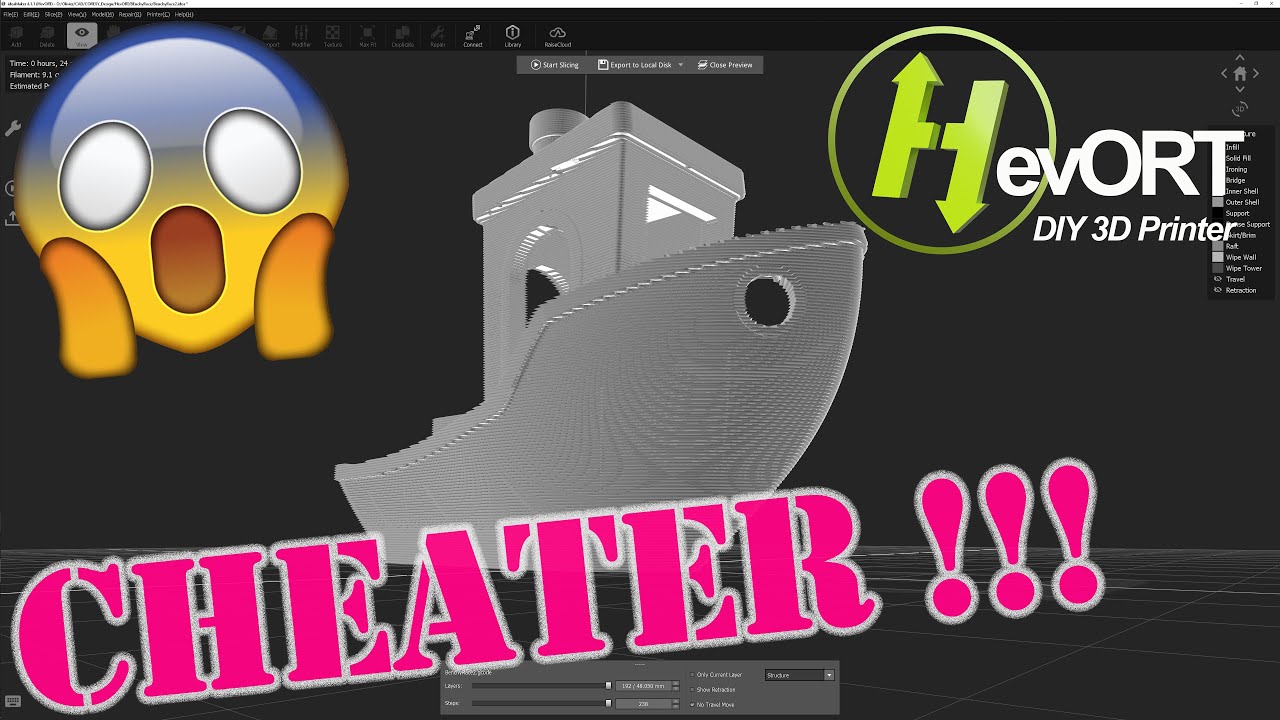 That is insane fast!

Yea, I thought my printer doing 100mm/s was fast.

Yeah, I was watching the 800mm/s demo, up to where the motor started skipping steps. Presumably he gets it working, but I don’t want to start looking at my printer as hopelessly slow (Even though it kinda is.)

One of the reasons why I want to go to a CoreXY type build is to see if I can get to about 150mm/s. CoreXY seems to be delivering the best speeds in general with minimal artefacts and ringing.

I need one of those hevort printers… with the servo motors… and a better extruded motor maybe. Jeez!!!

Dang. That is truely impressive. My little i3 clone is not worthy…

I have to say I would be happy if development goes more in the direction of speed, vs multi material like has been the past couple of years. Being the type who mostly prints end use items, I have not got into playing with colors beyond swapping filaments for colored font embossing (legibility is function, not form). Speed and variety of materials (like nylon, tpu, abs, etc) are key for me… and of course dimensions. So I am excited to dig into this new development around corexy… and hope servo motors become more mainstream soon.

I’m pretty sure my current printer could print faster, but it’s one of those things where I got it reliable and never bothered to mess with setting anymore.

I built my printer Jan 2017. And with the exception of a few mods here and there, it’s pretty much stock. It gets the job done, even if it’s a little slower.

The problem with speed is at some point you lose layer bonding strength. You can print something small really fast and it will just be a goopy mess because there was not enough time to cool between layers and if you print something large really fast you can lose dwell time to bond the previous layer.

Pretty sure there was a chart somewhere with ideal dwell times per material.