My brother and his family recently moved to Idaho, so I decided to make them a carving of the state with my new portable Primo MPCNC. He drives all over the state as part of his job, so he is sending me lots of beautiful photos of the Rocky Mountains and rivers. Idaho has a lot of terrain!

I got the terrain map data from Mapzen. Touch Terrain from Iowa State U is another good source of heightmap data. But the Mapzen one automatically adjusts the greyscale for the highest and lowest points in your chosen region, which saves a few steps. I used VcarvePro to design it, which was not easy but much easier than previous terrain carvings I have done with Fusion360. I used a 1/4" upcut two-flute carbide endmill for the roughing and cut-out, and a tapered 0.75mm ball nose bit for the finishing passes, with something like 20% stepover. That means it took about 5.5 hours per pass. But the end result needed very little sanding. I have an album with photos of the build and lots of time-lapses of the carving, more than you ever cared to watch. Have a look!
https://photos.app.goo.gl/pWoMZpooRQrwhw1u6 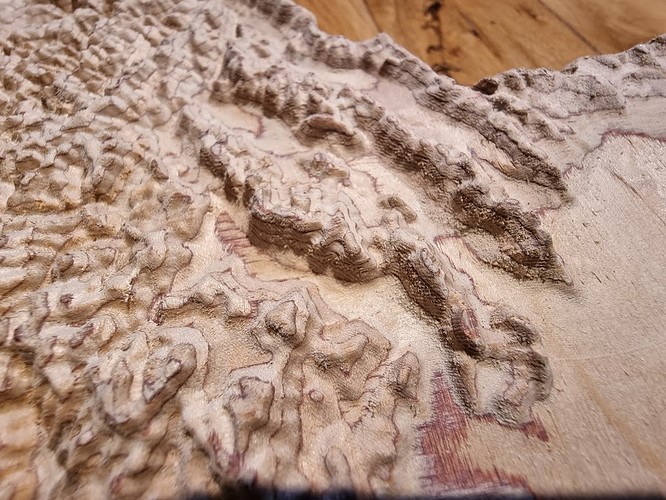 Too bad I live in Florida. Mine would just be a flat, featureless piece of wood in the shape of America’s johnson…

That carving looks great. After doing some of those speed tests a little while back Now, I am very interested in trying to really crank through something like this at high speeds. I love the idea of a small step over, as sanding something like this is not high on my to do list.

I make the joke whenever someone makes a state shaped cutting board that almost all cutting boards are colorado shaped. But in a carving like this, Colorado would look pretty awesome (but it wouldn’t be a useful cutting board anymore).

This look great and it really has very good quality finish.

Nice choice on the plywood, now you have topo lines as well! Awesome project and execution.

Too bad I live in Florida. Mine would just be a flat, featureless piece of wood in the shape of America’s johnson…

Anybody aware of any tooling to overlay a GPS track/path on top of one of these? Been wanting to do one of these for a Telluride to Durango mountain bike trip I did.

Haha! We could call this the “Johnson factor”.

Yes, I had to multiply Z by about 5 (?) In the 3D model of Idaho. A little appreciated fact is that the Earth is smoother than a ball bearing, to scale. If you are only carving a few peaks across a smaller area, you may not need to exaggerate Z at all. FL would indeed need a big Johnson Factor to highlight its 500 foot high “peak”.

Google Earth can plot a GPS recording on terrain, but what you need is something that would depth code it in greyscale. I’m sure it’s out there. Maybe just to AND (add) the GPS track with the heightmap using Photoshop layers would work.

I think I know that “peak”…it’s the hill where we pile our garbage along I95!