a few days ago, I posted the very first pictures of my mpcnc.

Now I use it already pretty regularly for working off a long list of wooden parts I had collected for the day when I have a CNC… So far, so good. N.b., this is still a build of Ryans initial design, I guess I was among the first hundred or so who started that very enthusiastically. Long story cut short, as expected, the stepper motor holding plated, printed in PLA, have developed a pretty impressive change of their once plane nature.

Ryan had provided a dxf file of a motor holder plate to be milled from 6mm aluminium. What a nice job for the MPCNC, me thought.

First attempts to cut aluminium went, well, pretty well. The usual balance between feed rate, tuning by touch, feel, hear, until there is a decent track. Until…

My next step was to reduce the z-step size to 0.1mm (!). Big progress from 1.2mm. I cranked up the spindle to 25 kRpM (looking at the values recommended by Proxxon for their MF70 (not in this MPCNC, but standing next to it) and observing the behaviour. Tool speed in X-Y was found to work good @~200mm/min.

After some hours, I could pick the first motor holder plate from the MPCNC.

The reason for the change in quality was identified as a losening of the belts due to a stronger bending of the PLA motor plates. Oh well. [attachment file=91936]

Then the shot hot the fan. Rattle and shake again, and then the very unpleasant sound of a breaking cutter.

New cutter, taming the tool path a bit, everything went smooth, until again a new rattling and shaking appeared when milling out the hole for the stepper axis. And only at the topmost point where Y changes its direction. Not at the lower minimum. While I watched that and hoped for the best, the next entry into the danger zone ended fatally for the cutter. [attachment file=91938]

The second in 30 hours. Starting to become an expensive hobby

Any recommendations from you people out there who have stepped though this already?

Should I build the latest gantry assembly first to get more stability into the machine?

The usual formulae for setting the rotation and forward speed suggest very different parameters for doing this. But would a 3mm cutter really cut @ 500 rpm? Can’t believe that. I did not find a source that specifies minimum values for the rpm settings. 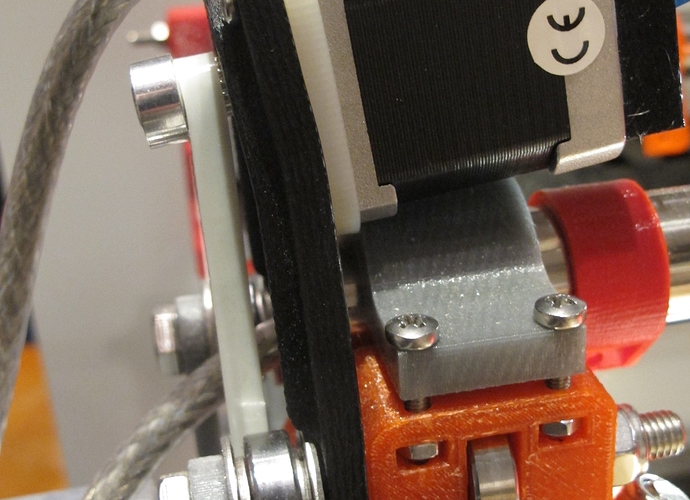 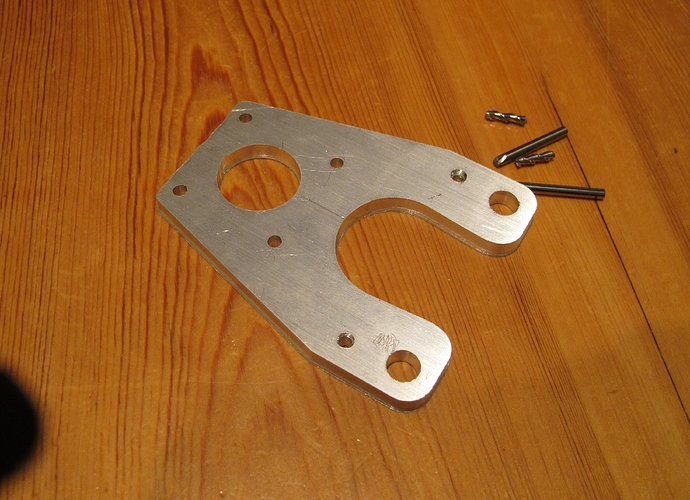 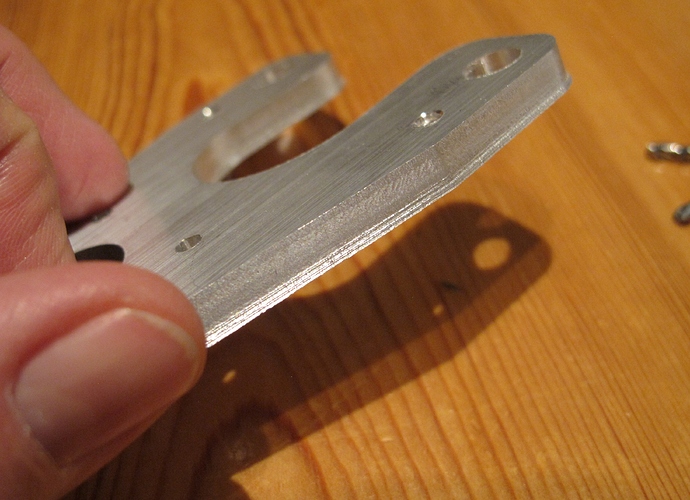 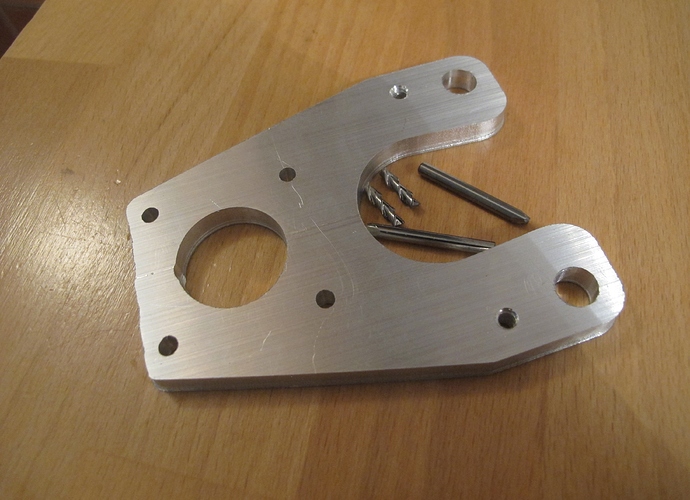 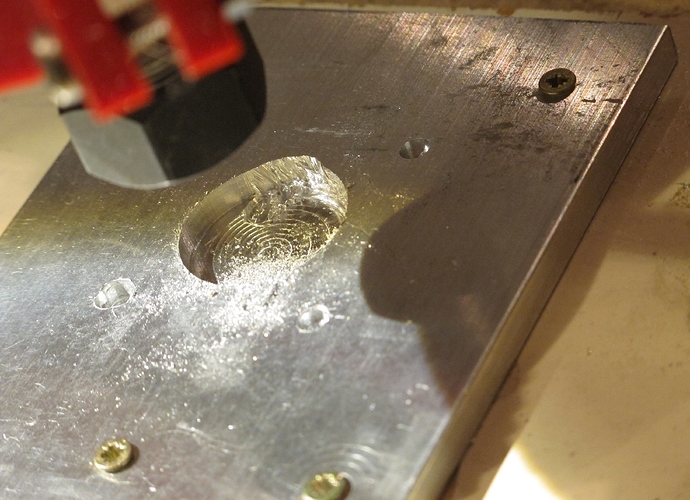 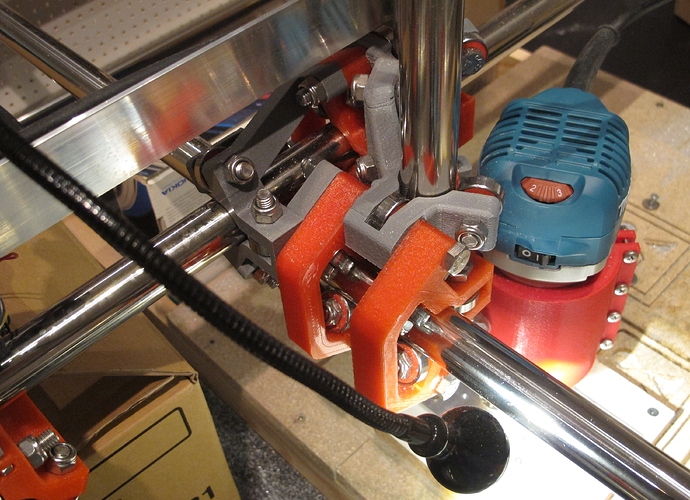 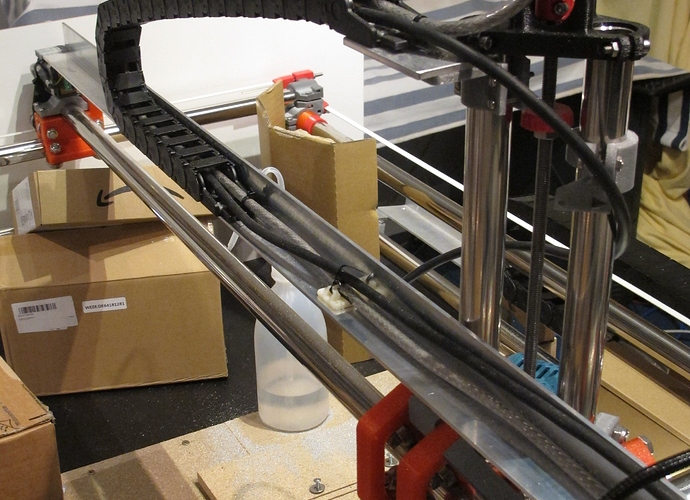 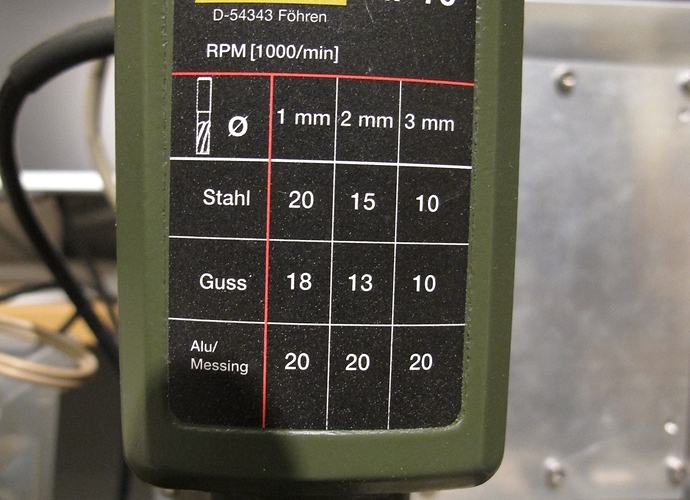 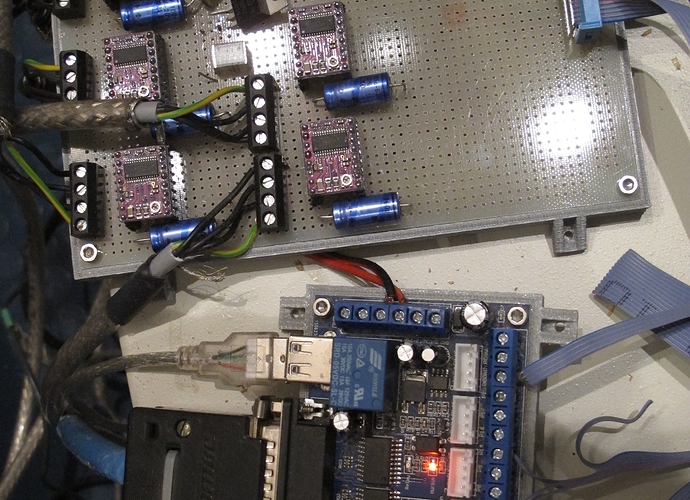 I tried that as well, aluminum plates. Turns out it is time for you to update, the burly revision is several version ahead and I think you will love it.

You just pushed it vehemently up on my priority list. Thanks.

Recently i have failed two cuts of aluminum until i realized that i have to slow down rpm. First 2 tries was at 20000-25000 rpm.

Cut is a pocket 11mm depth, rectangular part is 18mm width and circular has 28mm diameter.

Next time I’m going to try allow fusion to use automatic WOC. (It show tome as 36min). Because it cuts pretty well for full with slotting, so i guess woc more then 1.1 can be ok 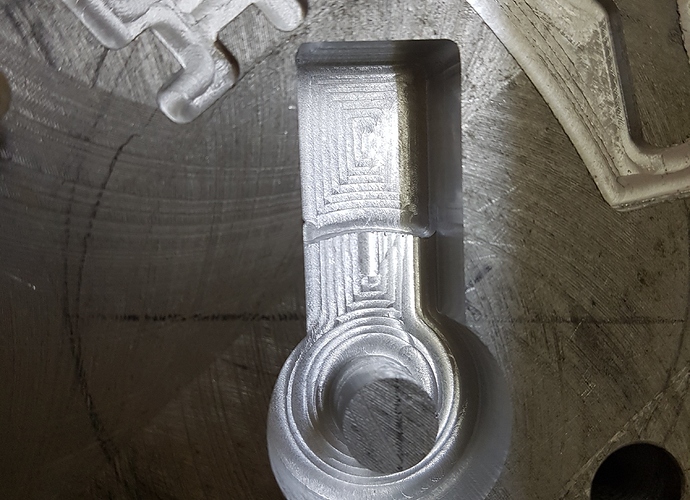 Guffy, thanks for your comment. Your parameters are not that far from mine (except DOC and a double flute bit here). As Ryan suggested, I’ll have to improve the stiffness of the setup at large.

Yes, I am aware of that. My router spindle’s slowest speed is 10.000 rpm. Looking at some water cooled rotators from China already. Hell, the MPCNC itself is a bargain, the follow-up costs are more substantial… Will that change? I guess yes, they will get even more substantial…

You could get a few single flute end mills to try before spending a ton of cash.

Right now I’m a little bit into trouble to choose the right router.

I’m looking now at the Makita R070 or what it’s called, with adjustable speed a bit more power, but also with 1.8Kg if I’m not mistaken. And maybe a ~30% higher price tag.

I watched a few YT videos, and it basically says. I might that put now very simplistic:

The smaller the bit, the higher you can go on RPM. Also it has to do with the feedrate.

To put it very simplistic again, is the MPCNC not a strong enough build to run the feedrate with a 30000Rpm trimmer? Don’t take that as a complaint, just maybe helps me to understand the whole problematic easier.

Jethro you are speaking in to vague of terms. It all comes down to what material you are using and the size of the machine.

The smaller the bit, the higher you can go on RPM. Also it has to do with the feedrate.

No, the smaller the bit the lower the load is on the CNC at a given feed and speed.

To put it very simplistic again, is the MPCNC not a strong enough build to run the feedrate with a 30000Rpm trimmer?

Not true, most of us use a ~30k dewalt, it is actually the recommended tool.

The bit size and RPM have to do with the tool and project not really the machine as much. Anything under 1.5mm is really hard to use.