Still playing with the concept. Had a bunch of those exercise mats laying around, one side is grey, the other sides are bright colors. Figured they’d make cool drawer liners. We used to make them by tracing the tools with a sharpie, then cutting them out with an exacto knife. Then glueing that foam to some more foam for the bottoms. Put the tool on my old flat bed scanner and scanned it full size, then opened the image up in inkscape. Messed with that horrible gui to trace an outline and add a couple finger holes. The first cut I didn’t realize the image was backwards, so that didn’t work so well. Second one works, though I need to scale the svg up a few more percentage points. It’s a little tight. 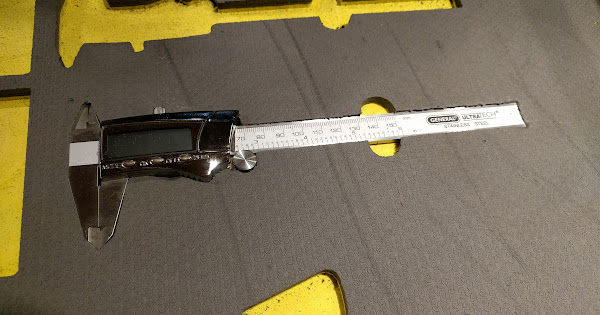 Cool idea. I wanted to scan something to CNC the other day, but I can’t remember now what it was…

If you’re looking for the outline and the background of the object was white, you can trace bitmap, with basically a binary filter. Anything white will be one object anything not white will be another.

There is no way in hell I could organize my toolbox like that…unless. So you are saying if I get a bigger tool box I can actually organize it…field trip to harbor freight tomorrow. Toolbox and some floor mats.

I wish, I have been trying to finish my bedframe for too long.

Looks good I would love to get that organized. I can’t wait to see a full drawer laid out.

@Ryan Yea, my toolbox is too small for all the junk in it too. That and I don’t have full sets of anything.
@Jeff If the scanner was one of the cold cathode tube types it probably would have lit up the top better, but it uses rgb leds, so not as bright.

It might almost be easier to lay them out on a white piece of paper and just take a picture. Most tools have a built in scale…

That’s pretty cool. I don’t have near the room in my toolbox either. The best I can do is make sure all the screw drivers are in the same drawer. And that’s assuming the wife doesn’t borrow one and put it back with the wrenches.

I used dense packaging foam for my lathe/turning stuff.
I hand traced/cut a sheet all the way through and then I used a spray glue to glue another sheet underneath it.

hand tracing/cutting that stuff was annoying, and I hadn’t thought of using the mpcnc to do this!
Ive got more parts/tools to cut out spots for and I’ll def. be doing it with the mpcnc instead.

For getting shapes from photos, I really like to use inkscape, it’s got a really good image border to dxf function. (easiest to do if you can take the photo of the object w/ a solid color background)

I was thinking of doing this when I was cutting foam trying to figure out my Low Rider trapezoid issue. I wonder what the best foam for this is (hopefully it’s cheap). The purple foam makes a nice clean edge, but I think it would break easily. I was thinking I’d like to do something for my RC transmitter (It’s a cheapo 9xr, but most people don’t know that).

I wanted to make an accurate copy of a keychain a friend of mine had (it was a bear that had a bottle opener between the mouth and front claw). I had him take a photo on some graph paper, from a reasonable distance, like 2 feet away. I used gimp (similar to photoshop) to select a rectangle on the graph paper, and then I could stretch that into a rectangle in pixels, to remove any skew, then I traced it with the lasso, blackened inside the lasso, whitened outside the lasso, and turned it to an SVG with inkscape. That was a few years ago, I almost forgot I did that. I successfully printed a copy, and it opened one beer, but I didn’t think the plastic would hold up after a few more beers. The scanner should make an image without the distortion though, so I’m not sure if this is helpful. Maybe the tip for using the lasso instead of inkscape’s stupid path tool.