Continuing the discussion from So when does the mount for this come out?: 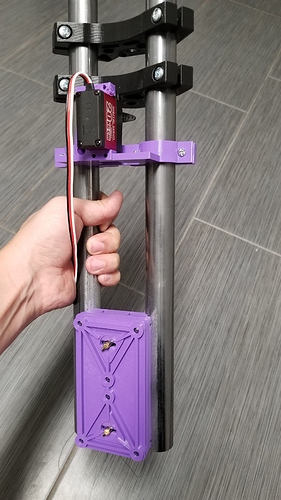 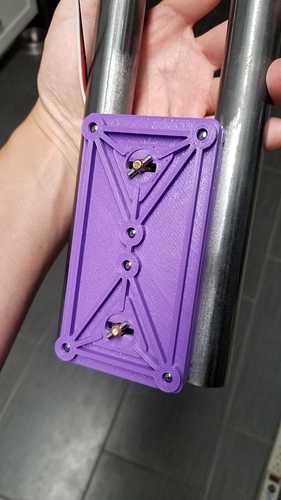 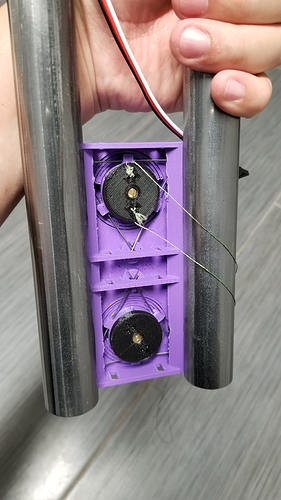 Similar concept as before, driven by pulleys and a servo. Now using metal cleats and springs and a flexure so it can have some axial motion and some control over the axial force/spring constant. It can be super strong without risking cracking any parts. I’m stoked!

The only vitamins are some 5mm rod, 3mm rod, 8mm ball bearings, piano wire, string, and some glue, so I’m really happy about that. In contrast, when I look at the BOM for Jubilee it makes me want to cry.

Hoping to get this up and operating this weekend!

Here’s an update: I’ve got it working, but there are some things I need to fix. 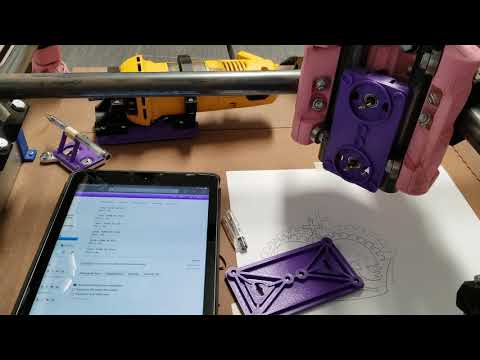 One, the 5mm rods are held in the pulleys (black circles above) just with friction, and it doesn’t hold very well. It needs glue. It slips slightly (axially) and loses its grip, and if it slips in rotation then that’s bad news.

Also the protrusion of the rod collides a bit with the DW660 mount. I’ve made a plate that matches the Burly universal tool plate, and that is fine, but I need to either adjust the mount to make it slighly farther away (which would be universal), or carve a little pocket into the DW660 mount.

Also, while the springs are reasonably stiff, there is no preload, so there is a tradeoff between the axial grabbing motion and the amount of force that it will hold with. This will also change when the PLA flexure creeps.

So without any preload, the force (vertical axis) vs. displacement (horizontal axis) looks like this: 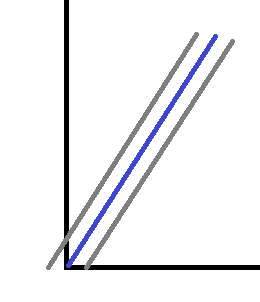 where purple is the ideal relationship but depending where the flexure has crept, it could be the grey lines. This means variable tension in the locked position and perhaps more importantly, variable position in the unlocked position, which in the worst case could fail.

With preload and a hard stop in one direction, the relationship looks more like this: 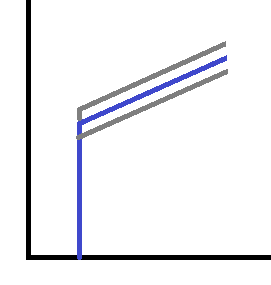 This can still have some variability in the tension but in the unlocked position it will have a consistent axial position and less axial deflection from the unlocked position is necessary to get a good strong hold. Space is tight and not much axial motion is available, so I’m pretty sure preload is going to be important.

Routers could be swapped by hand and it’s still easier than fussing with bits and resetting Z and all that, but there is a big step between an easier manual change and an automatic change.

If anyone has brilliant ideas for parking tools, I’m taking suggestions.

So I’ve been trying to find a way that a carousel could work and still have clearance and clearing the side rails while reaching the tool holder is very constrained. This sketch was about the best I could get: 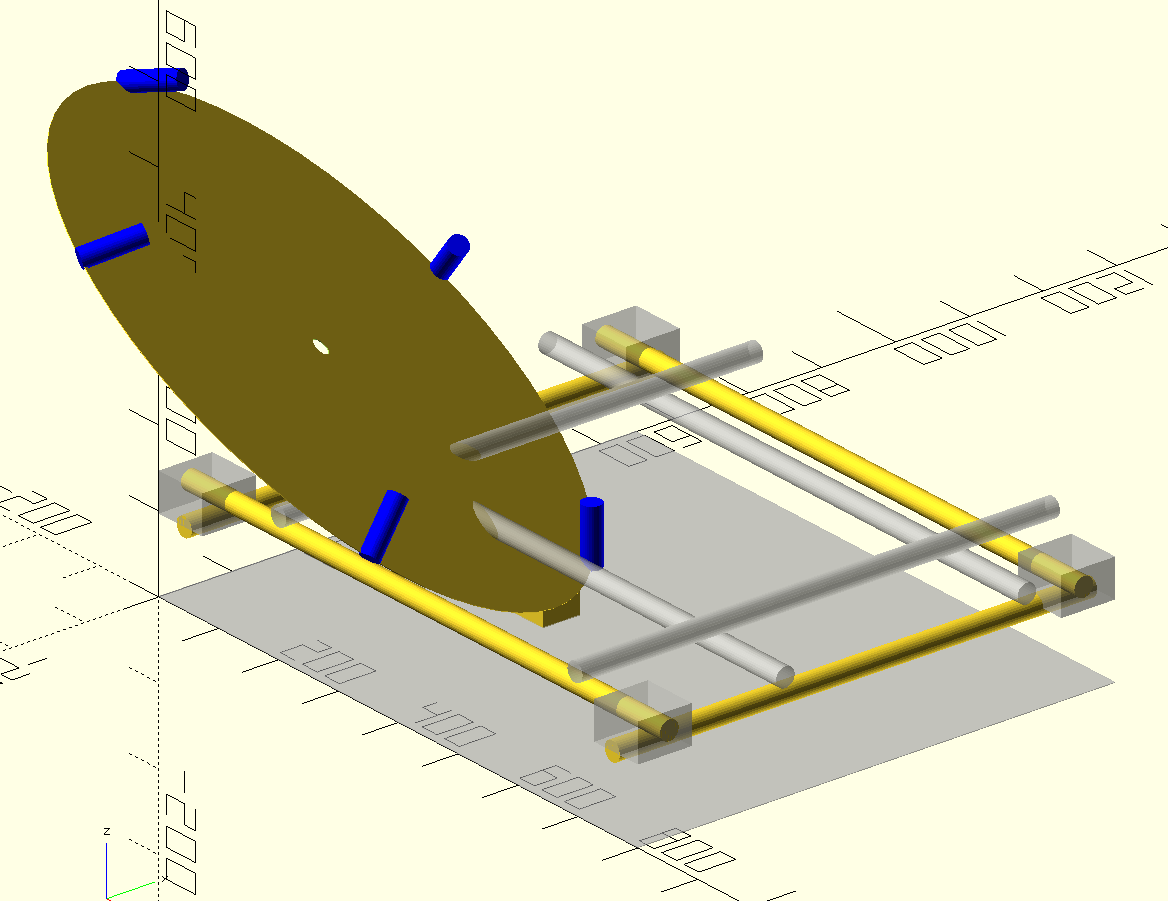 The carousel would have arms, not a disc, so it could move out of the way, but still I was not liking it.

So after some more contemplating, I think I have an approach using this stubby modified core, almost done printing: 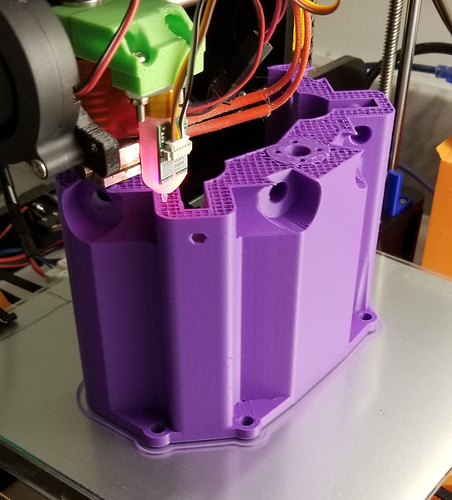 The idea is this: I’ve noticed the Primo core is symmetrical by a 180 degree rotation, except for the flange at the bottom and the leadscrew nut holder at the top. By flipping it upside-down, everything still fits except the flange is at the top and there’s no spot for the leadscrew nut. By bolting this stubby core on top of the Primo core using the flanges, I can have three floors of bearings along the Z axis instead of two. Then I can raise the Z axis higher, and the tool carousel doesn’t need such a crazy angle to reach down into the workspace. Clearing the side rails is no longer a major problem and the loading/unloading position could be much closer to the lower left corner (and probably more tools can fit on the carousel).

Hard to be sure if this will work until it’s fully operating, but I think I see a path… 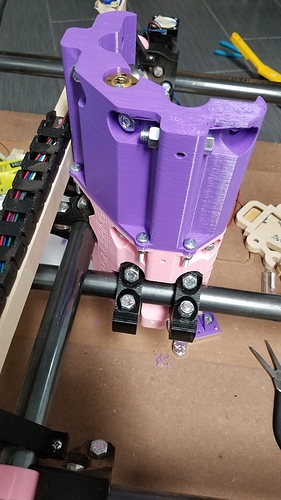 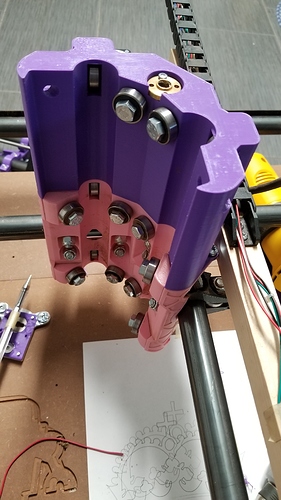 Nice and high, should have no issue reaching with a carousel of tools. 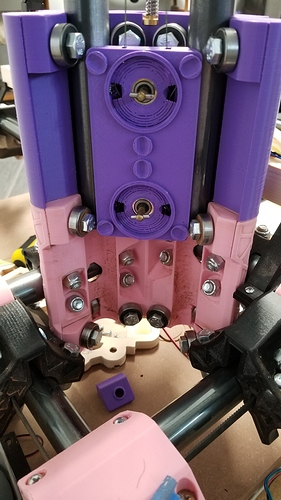 Not especially stiff (flange joint I think) but plenty for swapping tools. And plenty stiff when lowered.

Flipping the core I forgot about the special Y clamp to clear the bolt on the truck.

I’ll live with it.

What if the carousel took up the same footprint as the machine? The different tools would be on the inner diameter instead of the outer?

I don’t think there’s a good way to reach the normal working Z height range because it’s hard to clear the side rails. I may be missing something, but I think this would also be true on the inside of a ring.

So the remaining options are for extra Z range below the table (through a hole) or above the side rails. Below the table would have plenty of room and you could have a ring with tools inside or outside. What I don’t think I can solve is the problem of how to route the power cables.

Above the rails is the approach I’m taking and just requires the Z extension to allow the Z axis to raise extra high.

I’m going to integrate the carousel into the front left corner. Here is a prototype for mounting a vertical tube to act as the axis for the carousel. 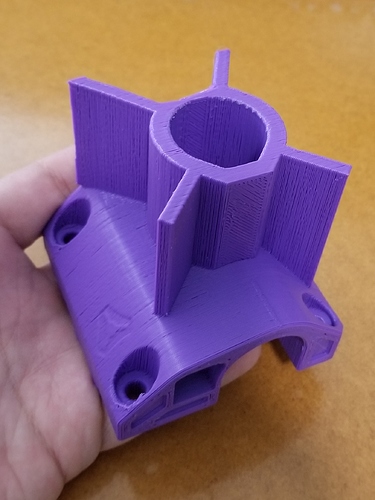 The plan is some herringbone gears that I can steal from another project to drive basically a 4th axis with no need for more belts.

What if you had power running to brass plates in the mount system you made. These plates would make contact with a second set in the individual tool mounts. What ever may be needed to convert voltage per tool could be mounted with each tool. This way you only have to manage one power supply. I’m not sure if this is even possible just spit balling.

This is possible. I have some discomfort with putting 110V on an exposed connector but a good design could probably be safe enough and reliable enough. There is an advantage that if it were scaled to a large number of tools, it wouldn’t consume a lot of GPIO pins and require a lot of firmware/gcode hacks to turn on the correct tool. Even if the individual tools are not plugged/unplugged, there would be value in some mechanical multiplexing of the power rather than having N relays for N tools.

I included an electrical connection to the tool in my previous design (barely worked) and that is still in the long-term plan. This was intended to be 5V step/dir/enable and probe, which at a minimum allows an axis on the tool, but it is also kinda-sorta like SPI and with software (hand waving) could open up more possibilities, but that’s the future.

The other thing with below-the-table is that besides power, some tools have other needs for a connection like a 3D print head needs filament or a vacuum line for a pick-and-place grabber. So for a fully generic, sky’s-the-limit scenario, a hole in the table is problematic, but for electric power only, below the table would be more compact and have a cleaner look as well as being denser.

What about an in line rack that slides from side to side?

Yes, that could work too. I see no reason why it wouldn’t.

Then the “rocket” piece attaches to the wooden carousel wheel and tapered top section rides on top bearing. Three more radial bearings on the wooden piece ride against the tube (through openings at the bottom of the ‘rocket’. Tight enough so there is no play and the carousel can only rotate about its axis.

When the cutout portion is facing toward the workspace it has minimal interference. A large tool could conceivably collide with the gear but in any case it would only minimally shrink the working space. In particular the wooden wheel is high enough to clear the stepper motor on the X rails.

I still have not hooked up the carousel motor to the E axis, nor have I developed a parking spot for the tools.

Running out of time! 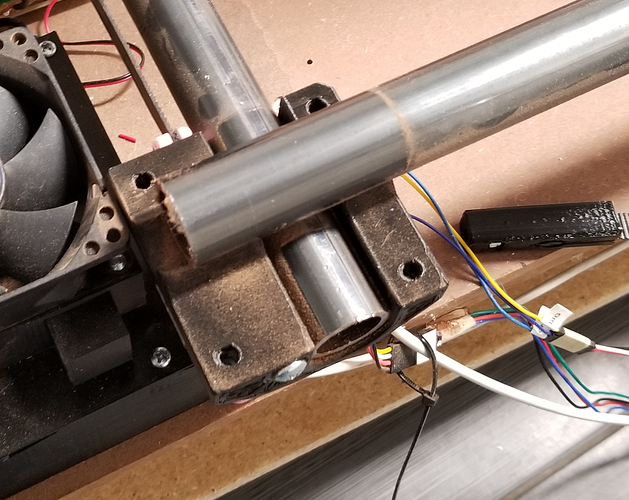 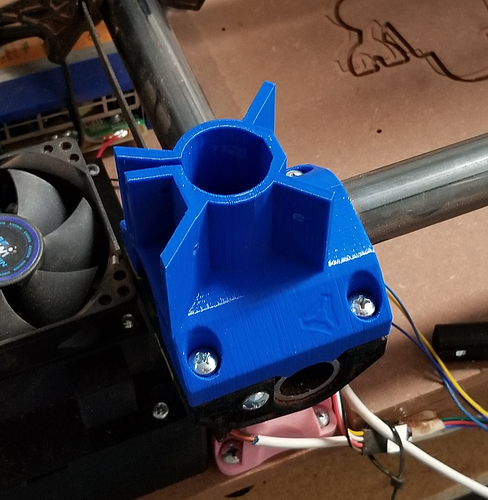 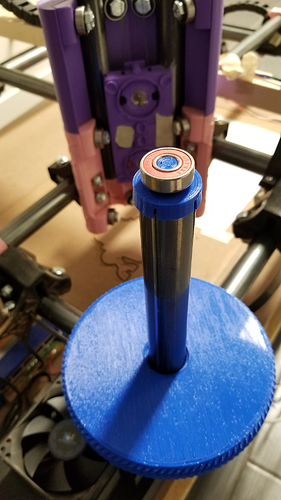 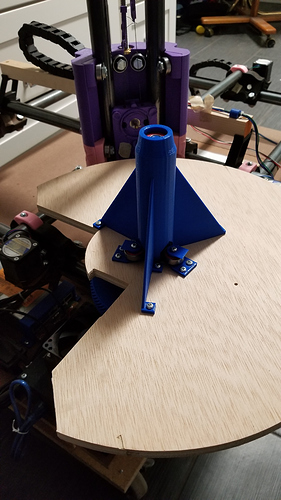 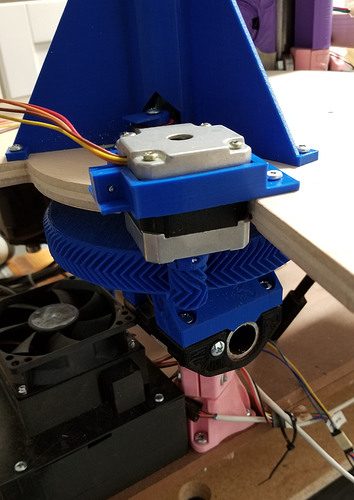 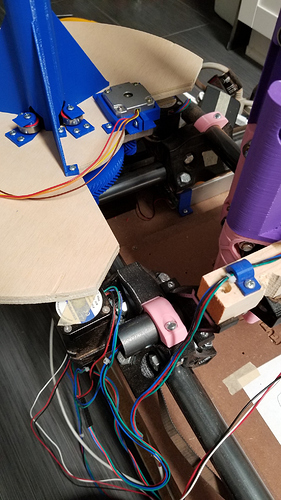 I still didn’t figure out how it’s going to work, but looks interesting.

Down to the wire! Deadline is later tonight. 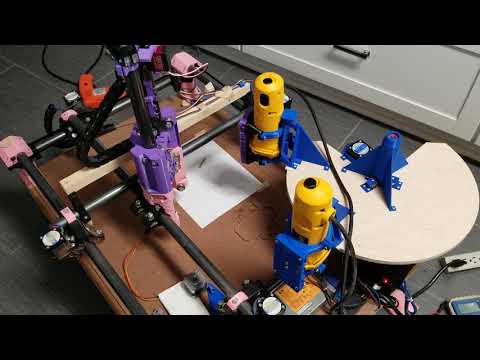 I don’t have time to build it twice to take pictures of all the steps, but I’ve written most of the words and I think I’ve identified all the pictures I need. So now that I have the video I can disassemble and take pictures along the way as if I were building it. I’ll see if I can take advantage of Christopher Nolan’s reverse entropy.

Make sure you tell us all where to vote. That is great. Do they need to be that far apart?

Do they need to be that far apart?

Unfortunately yes because they hang down far enough that they will collide with the trucks. The disc is high enough to clear the trucks and motors but the tools hang below the disc in order to be low enough for the tool changer to grab them. But they are high enough to clear the rails. This is also why the tool changer head moves so far away when rotating the carousel.

Dang, So in the end there is not loss of work area, you just turn into the blank open corner of the carousel and off you go? That is something very special. Amazing work!

I was meaning the angle difference between them on the plate. They don’t quite seem balanced, but it seems like the circle travels a lot to rotated between them.

Ok here it is: 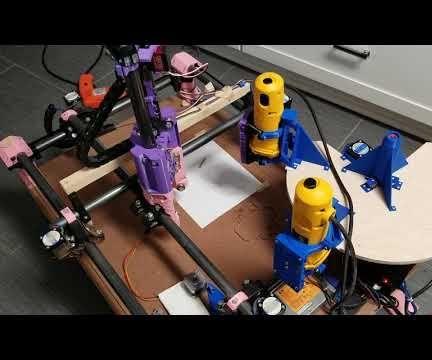 DIY Automatic Tool Changer for MPCNC: This automatic tool changer is specific to the Mostly Printed CNC, or MPCNC and unlike most tool changers, the mechanism replaces the entire router rather than attempting to switch out only the cutting bit. It...

And yes the angle between them on the plate is constrained because for each one in the ‘pickup/park’ position, its neighbors must clear the trucks. If you see when it’s picking up the second tool (the one to the left) the other tool (the one to the right) barely clears the X axis truck. If they were closer then there would be a collision.