Has anyone developed a mounting bracket or something that would allow for easy tramming of the Z axis with the DW660? I looked on Thingiverse and I am not really seeing anything. Did not want to recreate the wheel. Shimming seems the way to go, however you have to remove the spindle to do this and is not the best way to handle this. Other machines use some screws on the Z axis to fix this, however not sure if the current mount can be adapted to do this.

So how would you redesign the mounts to allow for easy tramming of the z-axis? Go…

Gut reaction to this is to first ask how often you’re unmounting and remounting your tool. If you’re not doing it very often, if at all, then having easy to adjust mounts means that you also have easy to drift out of alignment mounts. Once you get your device trammed, it stays trammed. Now, if you’re a constant tinkerer, and are swapping out your spindle, or even your entire Z-Axis, regularly, then perhaps looking into something with an adjustable standoff might be worthwhile. Again, if this is a real problem.

I’m not trying to minimize or dismiss any issues you are facing with tramming your spindle. I’m asking if the work involved in developing an adjustable mount that won’t slip is solving a problem that’s causing an equal or greater amount of work in tramming and re-tramming the spindle. Premature Optimization and all that Comp Sci mumbo-jumbo…

This is great. I am trying to tram my Z axis and it is just a PIA. Take it off, shim, put it back; rinse and repeat. Since I moved it around, it was now out of tram somewhere else.

Larger mills and CNC’s; have several alignment screws on the gantry to handle this so you can easily install shims, etc. Because of the angle in the Z-axis tubes, the mounting bracket does not have a lot of room to get in behind to put a shim, or tape, etc in. The screws are not easily accessible. If at all.

I needed to shim my Burley. I cut some shim from an aluminum cat food can. These shims were easily inserted without removing the router. I just loosened the mount a bit, slid them in, and tightened. Have you surfaced your spoil board yet? If not, you want to do that first before tramming the router.

I did skim the board, trammed the router and still had some small artifacts; they were not to bad, and routed my first “piece” and was not happy with the results. Started looking at how trammed was the z axis, and it is out in one area by 1/16-1/8". That is when I took it seriously. Been fighting with it on and off for two days. Maybe an two hours or so. I also found some loose bolts that caused the z-axis to move around, etc. Now I think I have the X and Y axis connections to the core to tight. Just frustrated all around.

Where I need to shim is on the mount locations for the lower DW660 mount bracket against the core. Or I have to remove material from the upper mount to swing the router top toward the core. In both cases, you have to take it apart. I really do not want to remove material. It would be great to loosen the mount and turn a few screw, to align the mount and then shim around it for support. Again, I was wondering if anyone had seen a mount that does this.

Suggestion? for a better way to do this?

This seems quite excessive for a Primo. I would question if there isn’t something wrong (or missing from) the tool mounts. There are the 2 printed plastic pieces that go in between the tubes and the actual tool mount, which equalize things out so the same mounts work for the 23.5mm “C” version, the 25mm “F” version and the 25.4mm “J” version. I’d be checking my printed tool mounts for problems, and consider printing new ones and scrapping them. I’d also be checking that the spindle fits properly in the mounts, that my printer is square and true, and that I printed both top and bottom pieces in the same orientation on the print bed (so that any error I missed would translate the same onto both pieces.)

It’s also worth testing if the Z axis tubes themselves are square to the bed. That’s a more difficult nut to crack, but there is some adjustment available there.

Yea, if it’s that far off, something is wrong. Can you post a picture of the machine?

It’s obvious that there’s something dreadfully wrong there. I mean, really… 3-in-1 oil in the same bucket with super glue and wood glue? And while I commend the attempt to organize with labels, your parts containers are all out of alignment and (shock!) stacked directly on one another! I’ll assume you built your MPCNC specifically to craft a proper shelved unit for them…

I hope you realize I’m just poking a little envious fun at your well-appointed lair. Nothing I see off the bat looks hinkey, but I’d wait for the real experts to take a gander…

OMG, I have not laughed so hard. Thanks. Actually, I have a project on the plate to make a metal racking for all of the storage and whatnot. I have a really small area in my basement for all of this. I have another area which has my two printers, electronics and work desk, etc.

Actually I am seriously OCD. Trust me this tramming issue is driving me nuts.

Which dimension are you talking about when you say 1/8"? Tram is about angles, not length. So I am a bit confused.

You are correct it is about angles. I am talking about the tool that @vicious1 has on Thingiverse. One side is about 1/16-1/8 higher than the other.

IIRC, that was about 100mm long? So a 1/8", 3mm higher on one side, would be 1.5mm/100mm error. Which is about 0.015 rad or a little less than one degree. A 6mm bit would be higher on one side than the other by about 0.1mm. That is definitely enough to be out of tram. But not enough to worry about in general. Surfaceing or large pockets will have little steps, but reduce the stepover and that will shrink right down. Slots and parts won’t notice at all.

If the mounts for the router are separated by the same 100mm, then you need a 1.5mm shim. That’s a pretty large shim. I would normally suggest looking for something cracked or super loose first. But your OCD tells me you already have. I wonder if the adjustments on the core are very out of whack somehow. I haven’t quite grasped how those adjustments work on the Z.

Well yes something cracked, something was loose, I broke a part taking it apart and yes my OCD is killing me. I am reprinting the entire 660 router mounting hardware in ABS like resin. Will have the part tomorrow. They will be spot on for dimensions and then I will try again. I am using some tougher resin for the nut traps. I stripped one of those. What a pain in the backside. My fault. 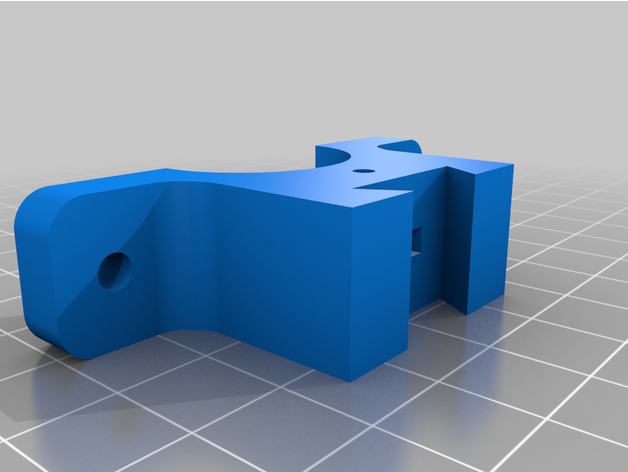 Designed up this dealer button to use in home games or have just as something laying around for any poker fan. It was inspired by a dealer button in Pokerstars VR. Printing: Ring - Infil to add weight, supports needed for spade inset. Letter...

Did anyone have a mount that had adjustments? I reprinted Burly to Primo core and still have issues. I am seeing a 3mm difference over a 100mm span. It’s noticeable using a 1" surfacing bit. I was hoping that using a mount that went directly on the tubes without the plate in between would cut out the potential for error but it’s still there. It’s making me think the case on my 660 isn’t straight.

This is a good idea. I have been kicking around an idea or two on how to do this. The problem is the mount points. The plastic is just not rigid enough to handle the stresses on a given “point” where you could adjust it. I was working on using resin parts in lieu of plastic for the Primo. However ABS “like” resins can be very brittle. Due to some other things, I have not had a lot of time to work through this.

I did find this. It says it’s for the “old” version and the design was to be incorporated by allted but maybe that didn’t make it into the design: Adjustable mount for (old) MPCNC DW660 - Fix perpendicular alignment problems by cmidgley - Thingiverse

I am just coming up for air, been a lot of other things on my plate. Has anyone seen or come up with an adjustable DW660 mount? I am kicking around several ideas, nothing that I am in love with. Alot of smart people running around.

I am eager to see a new design for the Primo spindle / router mounts that makes tramming easier. I can’t insert any shims without losening the spindle mount screws. I can’t loosen those screws without removing the spindle. I can’t remove the spindle without disconnecting the power cable, cooling hoses, and ground wire. Undoing all that and redoing it after a trial shim takes 15 minutes. Shimming requires many trials. I have spent hours and received many skinned knuckles screwing and unscrewing those damn mounts! The Primo design is elegant and beautiful and functional EXCEPT for those spindle/router mounts. I see a 2016 design mentioned here with set screws to adjust tramming with the spindle in place. Is there a Primo version of this? (or will this work on the Primo core?)