I have been meaning to upgrade this printer for over a year now. I bought this back in the fall of 2020 when they had a pretty good sale on it. This worked for about a couple of months before jamming & was too much trouble for me to fix since I was not crazy about the Bowden setup anyway. This is 12"x12"x12" printer & here is a link to the printer. New! ZYLtech Gear V3 Large Volume 3D Printer I am not a big fan of Bowden extruders, but thought I would give it another try & upgrade to direct drive if it didn’t work out. It didn’t work out and I have had the 24v E3D hotend & BMG clone extruder for a while. Now I know why I put this off for quite a while. I spent most of last week working on it.

First thing I realized was the bearings in the wheels leaked grease. Since openbuilds had a sale last week, I bought 8 extreme wheels to replace the X & Y wheels & replaced the 6 Z-axis wheels with some spare regular wheels with the good bearings.

Now that the wheels were replaced, I thought my only major hurdle would be wire management. After assembling the plastic carriage I had designed for the BMG extruder & E3D hotend, I realized the locknuts on the wheels hit the metal plates on the end. The original design did not have this problem because the screw head was on the wheel end. Thought I might be able to solve the problem with a M5 jam nut & lock washer, but only gained a little more bed width. I did not have much clearance for a locknut behind the extruder. I decided to cut away some metal from those brackets to solve the problem since it. Using my old jewelry saw was the cleanest method for the little bit of cutting this needed. I made a couple of plastic templates in case I messed up & had to 3d print or cut a couple of new plates. All went well though. Here are a couple of photos. 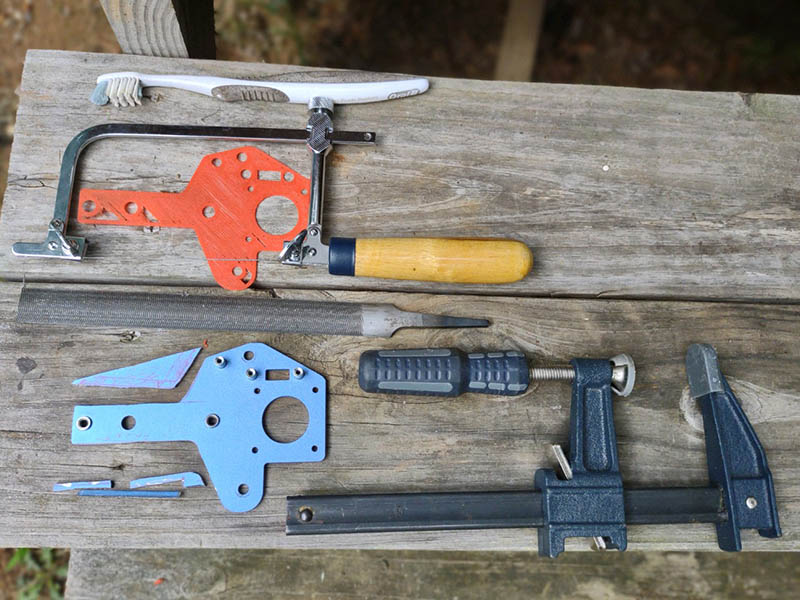 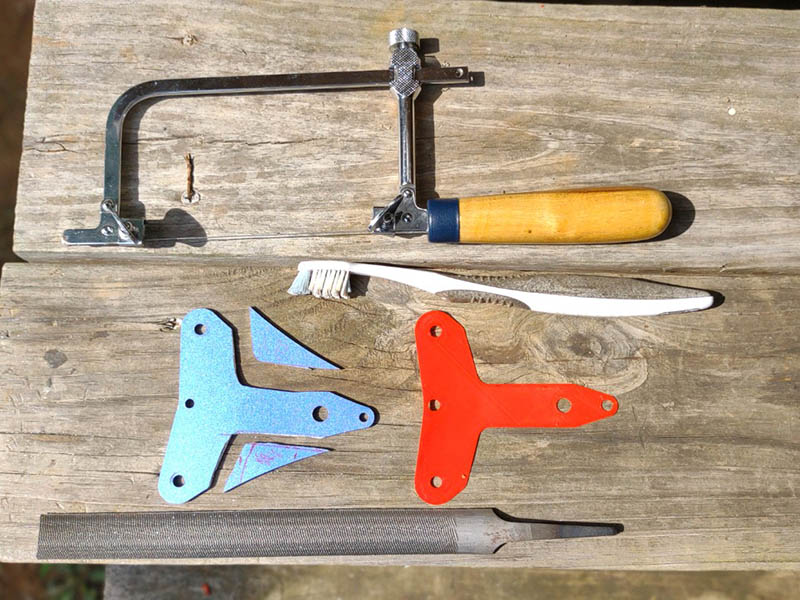 IMG_20220630_102610072_Edit800×600 106 KB
Afte 1st test fit with these mods, The hotend still did not quite reach the edge of the far end, so I cut another 3-4mm off the T shaped metal part and it fit. The next problem was the carriage alsohit the X belt tensioner before reaching edge of bed, so I was able to redesign a 3d printed version of part of it to fix that problem. I also swapped a few of the M3 pan head screws with socket cap screws and regular t-nuts with the drop in t-nuts where I could. Here is the X axis belt tensioning before & after. I did use drop in t-nuts with the tensioner since I needed as much room as possible there. 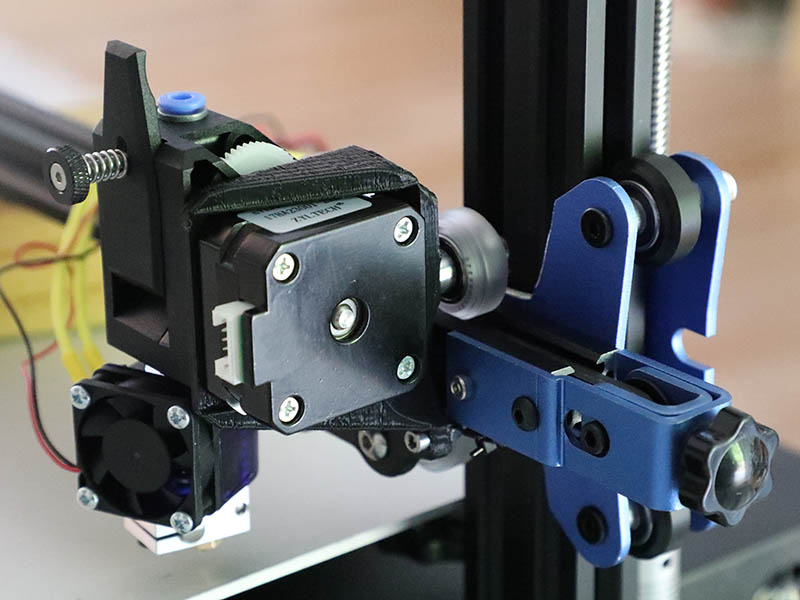 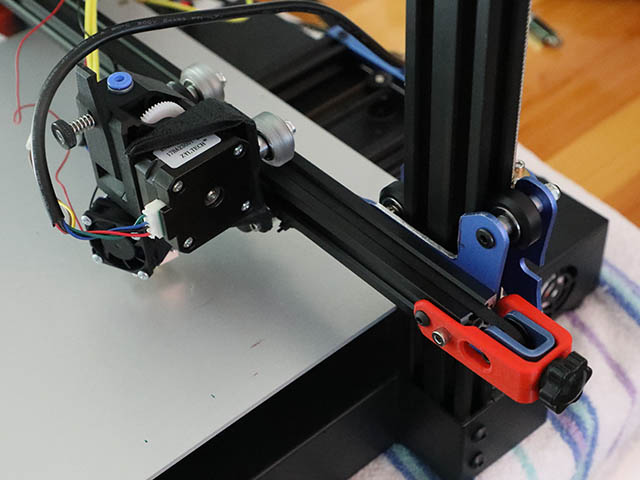 Before I could actually test the movement of this machine, I had to redesign a mount for the X/Z combo limit switch & also a new mount to hold the M3 screw for the Z micro adjustment. After a few trial and error prints, it worked well. You can see the 3d printed parts in red in photo below. 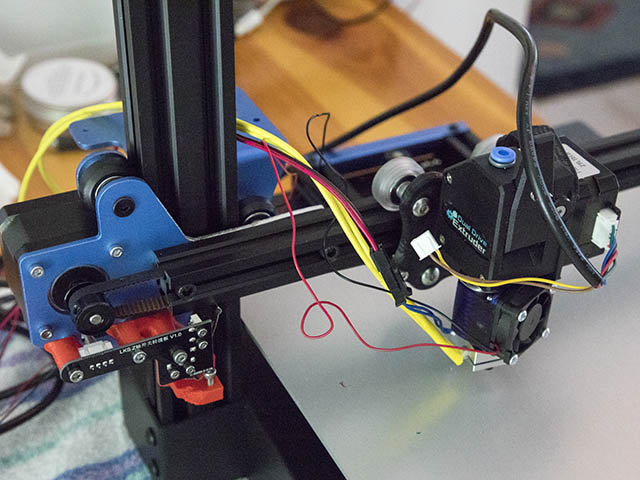 Now I was ready to test the electrical connections. I first tested the heatbed & hotend & they worked. I then homed the machine & all 3 axis moved correctly. I was a couple of millimeters off from the edge of build plate. I decided to tweak the carriage a little and had room to move the extruder 3mm closer to the carriage by recessing the wheel screw behind the motor. Now I have full movement of the 310x310mm bed. 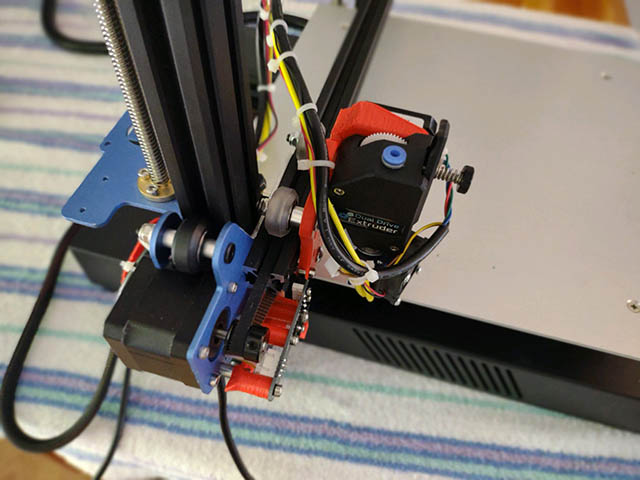 I only have the wire management left now. I tried using one of the black plastic wire sleeves, but does not work well, so for now I just put some wire ties every so often. It still needs some work to keep from hitting the bed in the back & am also not going to get full height unless I lengthen some of the wires or move the controller board from under the machine. I am more inclined to move the controller board and maybe go to a different controller as I don’t like the MKS Robin nano V1.2 board. I can live with not being able to go full height for now as I generally don’t print very tall parts anyway. The board has TMC2208 drivers on the X & Y and A4988 drivers on the Z & Extruder. Those A4988s are really loud now that I am used to the TMC2209. I ordered 4-TMC 2209 drivers to replace them. The fans in the case will be the loudest items after that. 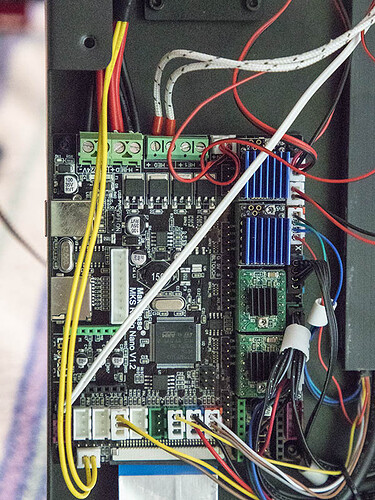 I seem to run into one problem after another on this printer. I moved the controller board to the outside of the case to make it easier to work on. I also changed from the Bondtech clone to a genuine E3D titan extruder, since that clone wasn’t working for me. I also changed all the stepper drivers to BTT TMC2209 in standalone mode. I am researching how to get them to work in UART mode on this board but haven’t found the answer yet. Seemed like it would be simple after watching a MKS video on it but am missing something since Marlin will not compile. I have a question in the MKS discord group, so maybe get an answer there. Probably better off switching to another board but will see if I can get this to work first. 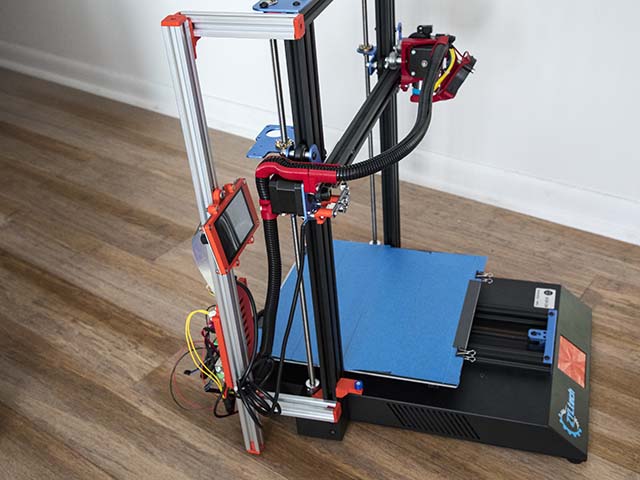 Now I am having a problem with that extruder motor or wiring. I had one pancake motor that seems to be bad, so am trying it on another one. Wasn’t sure it was getting enough current, so I hooked it up to my working machine & still had the same problem. I then took the extruder all the way apart to see how the motor turned. I used M302 P1 gcode to allow cold extruding & tried a 25mm extrude & a 25mm retract. Interesting that both the extrude & retract turned the same direction. That now makes think there is something wrong with the wiring. This motor wiring always confuses me. I seem to recall there are 2 different ways to wire these. Does this wiring look correct? 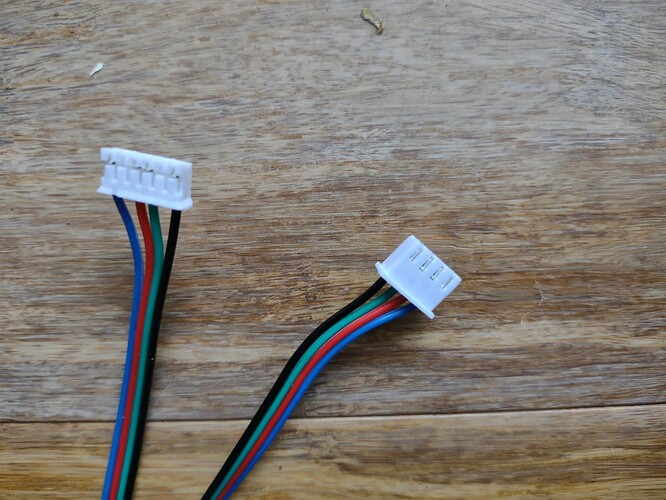 I found this interesting video to test the wiring pairs using a LED. Looks like my green & red wire need to be swapped. That fixed my problem. Now they turn correctly, CCW for extrude & CW for retract. After my 1st first test print, I heard a lot of squeaking, and after listening closely I found the X-axis idler pulley was the culprit, so I changed it to a pair of F695zz bearings which work well for me. Next test print had the same problem but was now the y-axis idler. I couldn’t get those F695zz bearings to fit in there, so I found a similar type of idler that was on there in my spare parts & replaced it with that. The next print had no squeaks. The original metal design with the bearings had no washer or bump out for the inside bearings to ride on, so both sides of the bearings would rub against the metal. I decided to see if I could change that front metal Y-bracket to a plastic one.

Of course, I ran into another problem of getting the part of the idler that was screwed to the case out. The access holes were too small (about 5mm) for most of my screwdrivers & I could not get enough grip with the largest jeweler’s screwdriver I had. Rather than go to the hardware store & see if I could find a screwdriver that would fit, I took a stab at designing a plastic knob that would give me more grip. It worked perfectly. 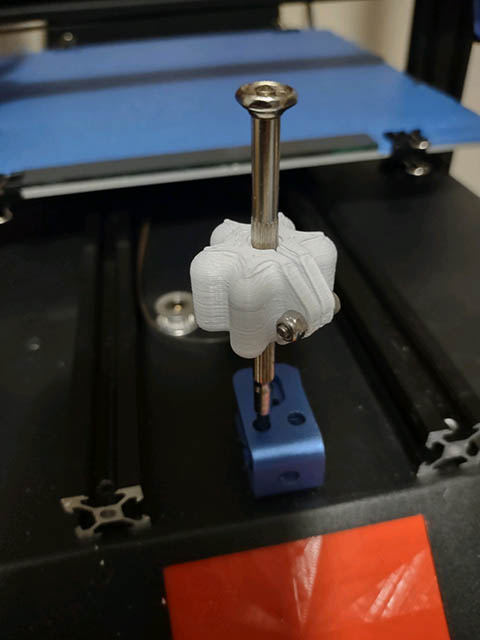 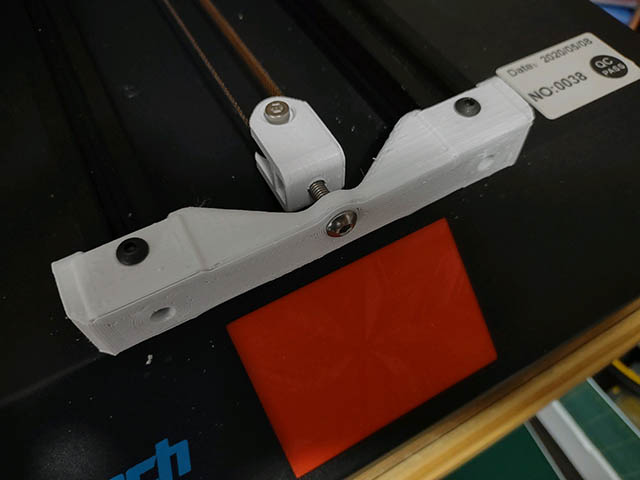 After some test prints, it works perfect & seems a little quieter also. Test print is about the same as before & is acceptable quality for me. 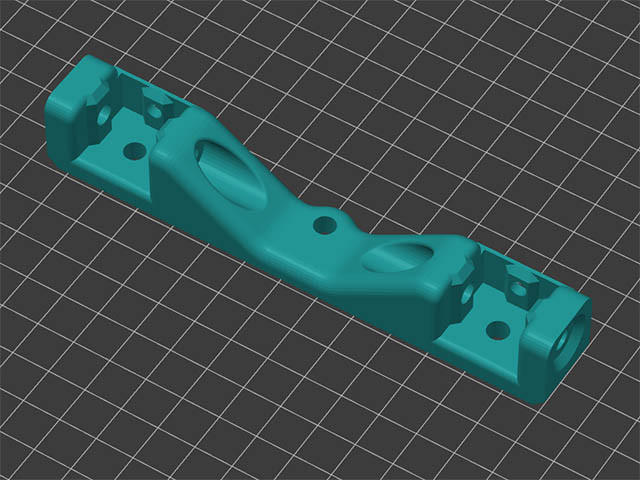 This is turning into my little test printer. I have been researching this GitHub - kevinakasam/BeltDrivenEnder3: All parts including Voron files for the Belt Driven Ender 3 V3 modification to change the z-axis lead screws to a belt driven system. After looking at all the mods associated with this, think I am going to do this. There is also a kit for most of the parts Powge Kevinakasam Gt2 2gt Timing Belt Pulley Bearing Motion Kit For Driven Z For Ender 3/pro/v2 And Cr10 I3 Creality 3d Printer - Pulleys - AliExpress , but I need longer belt & longer M8 rod, so probably going to source them separate. I need to redesign some of the parts for this machine. I have some of the parts, but probably going to be $40 -$50 cost. I am interested to see if it improves prints.

I redrew all the plastic parts for this Belted Z-axis because I needed to adjust them for this printer & also change some tolerances. It was also fun to do. I ordered the main parts I needed Sunday night. It was around $27 and shouldn’t need much more than that. Here is the remix I have so far. I measure about 1120mm of belt on each side. I ordered 5 meters of belt but looks like I only needed 3 meters. I still need to change the one top part to allow for the short 2020 I have there. 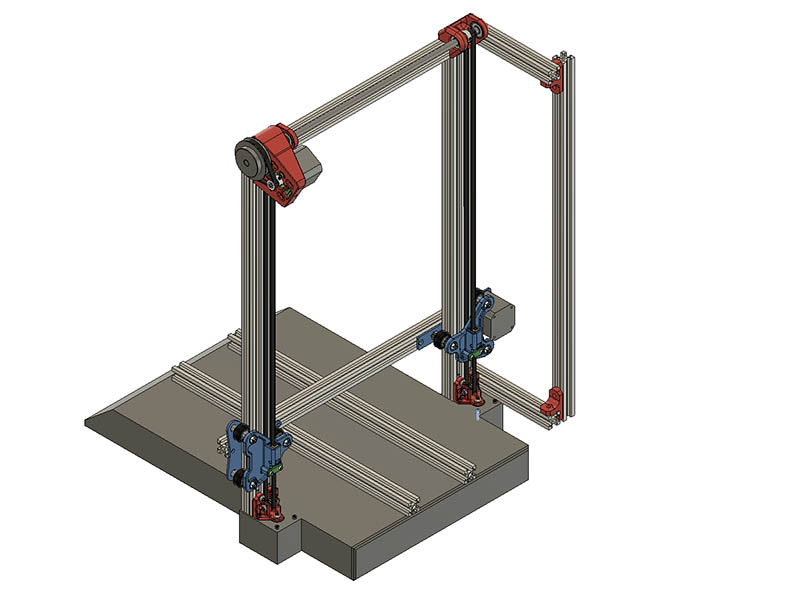