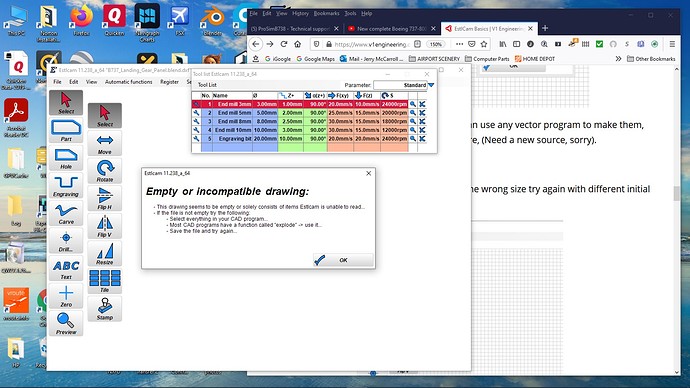 I have not seen a dxf from blender before. What if you try opening the dxf in something else? Like librecad?

I’m not a Blender user nor an EstlCAM user, and I’m not sure of the steps you took to get a DFX from a Blender model. But internally DFX files and STL files are very different, so I’m not surprised you are having issues. I skimmed a few videos on getting DFX files out of Blender, and the steps seem complicated and often depended on having a plug-in in Blender and/or Inkscape. Assuming you are doing contour cuts, I can think of a couple of ways to get what you want.

The free image software Inkscape has a feature that will trace the outline of a bitmap to produce an SVG. It is the only thing I know how to do in Inkscape, but I find I use it fairly frequently. You will need a clean image from an orthagraphic camera in Blender of the face you want to use for the contour cut.

Fusion 360 has a personal version. There is a steeper learning curve with Fusion 360, but the softwarre does allow a person to create CAM toolpaths directly from STL models. No DFX conversion required. There is also a way to take arbitrary slices on an STL model and produce drawings that can be exported as SVG files (requires a plug-in or using the paid version of Fusion 360).

You have to add the plug-in to Blender: Edit/Preferences/Addons and do a search for dxf. I’m not sure why Estlcam wouldn’t open it but I downloaded LibreCAD and was able to load the dxf file and save it, then Estlcad recognized it. I’ll see if it works later. 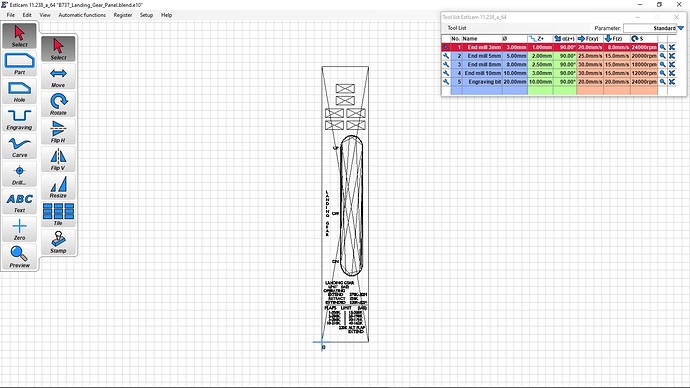 B737_Landing_Gear_Panel1600×900 291 KB
I haven’t been able to get the Estlcam CNC Controller to work with my router. I can only move it with my lcd screen. I have the usb plugged in to my laptop but it doesn’t seem to be finding the port.

I have a really old version of Adobe Illustrator 10.0 that I used to design panels that my son would cut with a laser machine when he worked for a sign company. I wonder if that program would work and be easier.

Estlcam controller won’t work with Marlin, you just generate the gcode and “print” from the sd card, or use repetier host or cncjs.