Ok got it to connect but after trying to jog Z just one side gos up (seems like feed rate to high) i go into machine settings set the feed rate of z to 8.5 and then in bottom right select the profile and still no change is there some other way you have to change feed rate?

I have used Octopi for a long time now… I have one on all 5 of my main printers . I just started getting into laser/CNC. I am getting the parts printed for the MPCNC and pricing local tubing for the Lowrider2.

What does this program do besides adding a web page selection to launch octopi and the cncjs? Trying to understand and get the “easiest” pi enabled setup… so i can do as close to my normal workflow with Octopi … but for the MPCNC and possibly with a laser unit… or even a standalone laser unit.

Thank you for all your work so far! I am really liking the hotspot feature… however not tested yet as i wanted to verify the info above…

What does this program do besides adding a web page selection to launch octopi and the cncjs?

It’s based on the octopi image, adds node.js, cnc.js and the landing page. I need to go remake the images for the rpi4 images though, and I broke the autohotspot in the last prerelease.

Getting settled in my new “hideout”… but still can’t find half my stuff. However, “slightly pushy”

daughter gently reminded me I haven’t followed up on building her a laser engraver… so pulled out a tiny Hobbyking T8 mini-mill I’d puchased way back and enough stuff to sorta get it running as a laser engraver. Set it up with Jeff’s V1PI image and CNC.js running on a Pi 3B… complete with webcam, though I haven’t figured out how to do timelapse video as with Octoprint. Is that possible yet, Jeff?

Actually the little milling machine is pretty nice and the printed tool mount accepts the Eleksmaker 2.5 watt laser perfectly. The 3-axis controller board was a bit difficult to locate information on (again!) but finally was able to adjust a couple of jumpers and verify the TTL laser modulation signal was indeed +5v levels… and not +12v. Runs GRBL 1.1 now and am using the M3/M4/M5 gcodes to control the laser… also the Sxxx parameter is 0-1023 (verified with scope) vs the 0-255 ranges I’ve used before with remapped fan controls and M106/M107 gcodes in Marlin.

Anyway, got all axes calibrated up – and printed a few of Jamie’s test pattern rulers – and then started playing with “traveling salesman” Tux I’d generated somewhere along the way. Here’s the result 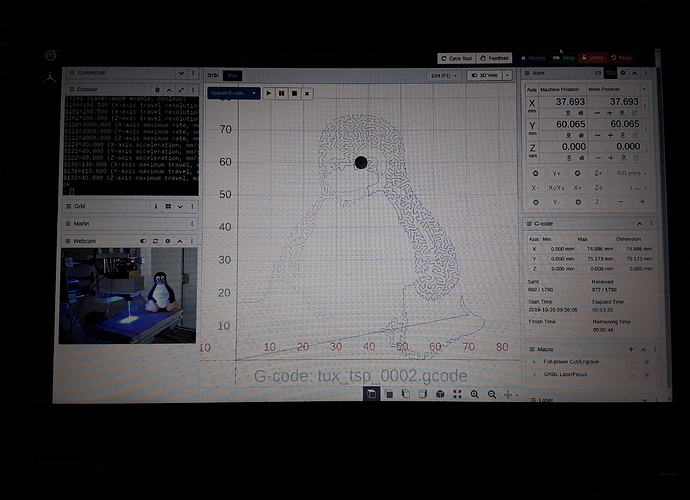 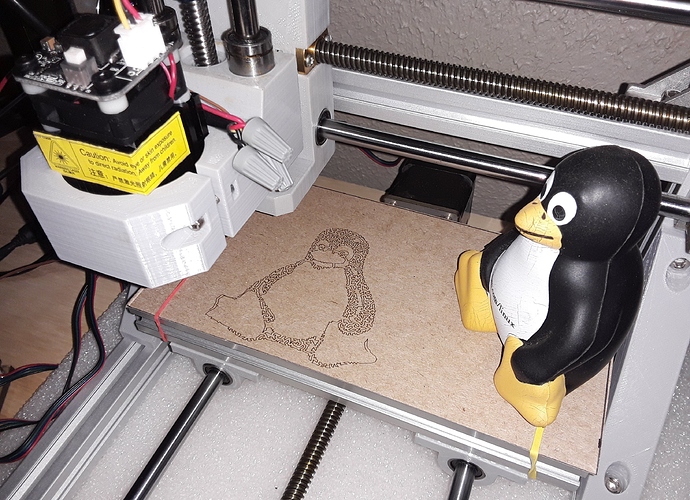 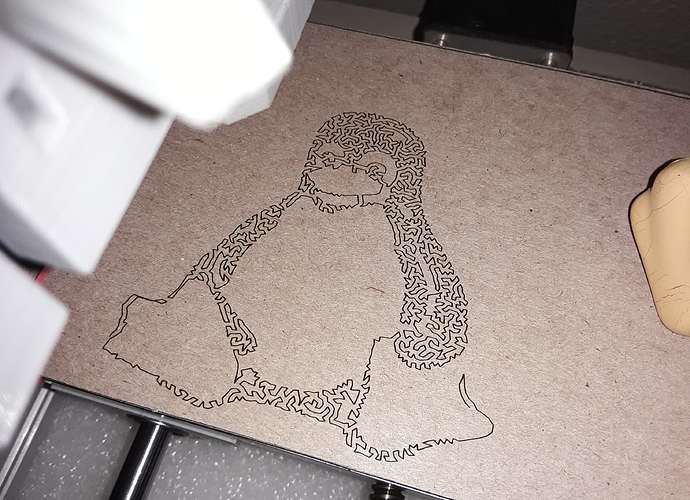 though I haven’t figured out how to do timelapse video as with Octoprint. Is that possible yet, Jeff?

No, I haven’t worked on that. There are some hooks in CNC.js to run a command when you start and stop a job. So I was planning on finding the ffmpeg magic commands needed to run a timelapse (heavily weighing on the octoprint solution). The tools should all be installed.

What a nice little engraver build. Thanks for sharing.

I have a new v1pi image ready. Here are what I’ve changed:

I haven’t done extensive testing on my machines (no prints or carves yet). If anyone is willig to test it, I would appreciate it. I will make an announcement in #software when I feel like it’s had some miles.

I neglected the hotspot in the previous version, but here’s the deal. There was an “auto hotspot” thing that would turn the hot spot on and off. I think that’s stupid, because, you either have wifi access or you don’t. If you’re on the edge (like a barn that can kind of reach), then you really don’t want it switching back and forth.

So instead, the hotspot version of the image has RaspAP installed, and there’s a link on the front page. This should be pretty useful for those of you that don’t have wifi, or don’t want your cnc on your wifi. It will show up at v1pi with a passcode of ChangeMe. More info in the docs. BTW, not all the features in RaspAP work for me, but the ones I really cared about did.

I copied the work we did on Ryan’s V1Engineering docs, and you might recognize the theme

. There isn’t much info, but I think it ended up looking better/less cluttered, and of course, easier to edit.

Freaking awesome! Thank you for sharing, and updating.

I have found a couple of issues. I think I solved them, and will be posting another image (with today’s date) later today, after work.

OK. I put the new images up. This is installed on my low rider and my 2 printers. The 12/2 version has some fixes for the cameras and the zeroW.

Thanks for doing this. I haven’t left the house to get a spare microSD card. Will do tomorrow. I can’t imagine having to run my MPCNC without it. I’d have to figure something out for remote control.

Ryan’s board come with Marlin right?

After using octopi and klipper with my 3D printer, I am thinking about using it for the CNC as well.

It does have support for Marlin. It isn’t as robust as grbl support.

Using Klipper is fine too. If cnc.ja works with klipper, it would be through the Marlin setting.

Thank you for the answers. I wasn’t intending to use klipper with the mpcnc. Just my ender.

It works fine. There are some codes that aren’t read correctly but I have not had a failed project due to CNCjs. It does seem to get stalled if I leave it on for a long time connected and I have to reconnect for sure. Am not quite sure where the issues are, but it is fairly reliable for what I throw at it from EstlCAM. I can’t get the probe widget to work right, but the home Z works ok and probes just fine.

Noob here so be gentle. I manged to flash a Pi 3B+ with the hotspot image and got it connected between my laptop running Octoprint and a ramps 1.4 board. I manged to move the carriage around, (LR2) but after 4 or 5 minutes the connection dropped out and never came back. Any ideas? Where do I start troubleshooting?

I’m a bit unclear about your setup. Your ramps board should be connected to the rPi via USB cable. Your laptop then connects wirelessly to the rPi hotspot. The rPi is running the CNCjs server. The Octoprint on it is there for those who have the MP3DP. You only need the CNCjs server.

Your laptop connects with the browser to the CNCjs server’s IP. But the laptop I assume for this setup should be connected to the rPi’s hotspot. This is there for folks whose wifi might not reach the shop or not have it at all.

Are these the instructions you are using? 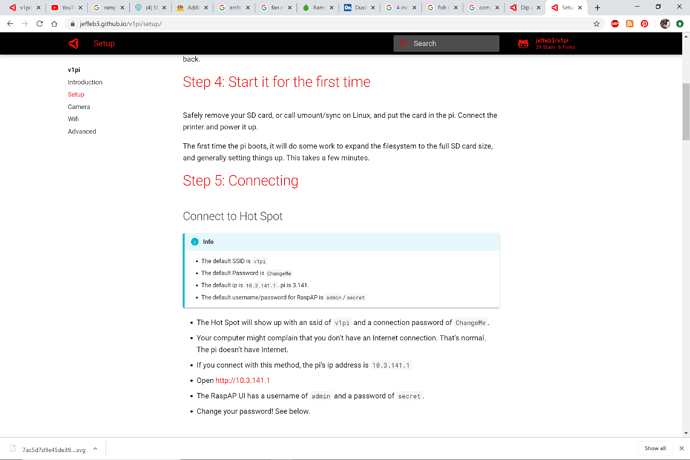 If you have wifi in where your low rider is, consider just using the other image and use the normal wifi network.

Yes, those are the instructions I followed. I used Octoprint to “check” things out because I’m familiar with it. Everything worked as it should for a few minutes and then just stopped working. One of the first things I checked was the wireless connection. I’m not sure why but it no longer showed up as a connection. I guess my first step is to check it with my phone to see if it finds it, the would single it down to Pi vs laptop.

What OS on the laptop?

I don’t have a windows machine. Trying with a phone is a good idea. Would windows delete a connection if there was no Internet available?

Have you tried power cycling the pi?