Love the cut, but not crazy about the paint job. I used a 1/4" router bit and a .0315" end mill. I did order some new bits to try out like an actual .25" downcut end mill and .0315 downcut end mill. I don’t see an easy way to stain the letter edges without it bleeding into the next color.

I’m open for any suggestions or comments. 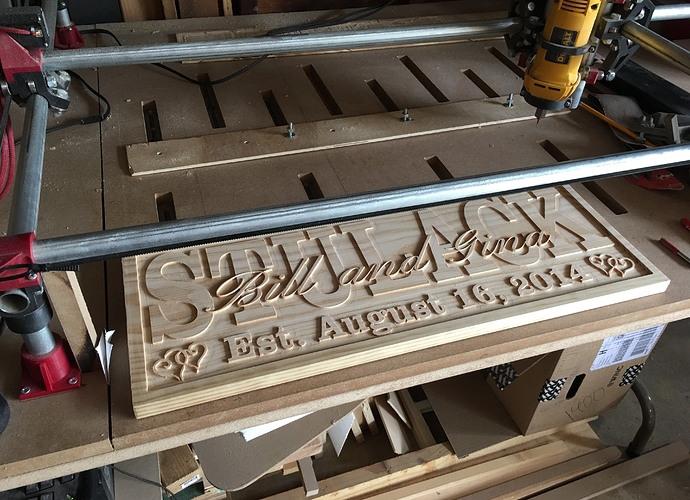 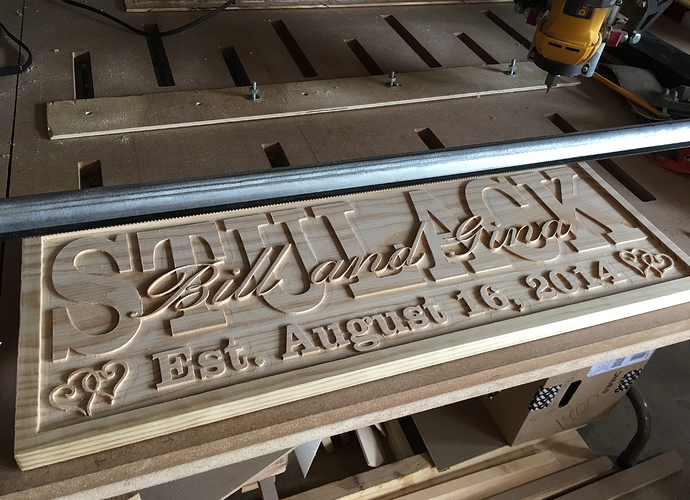 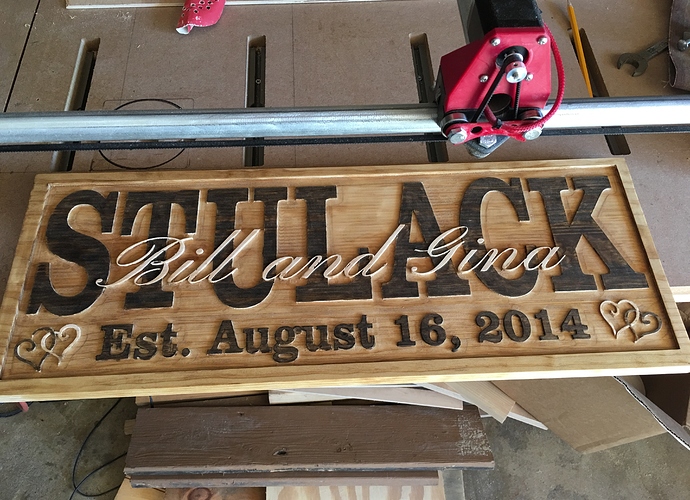 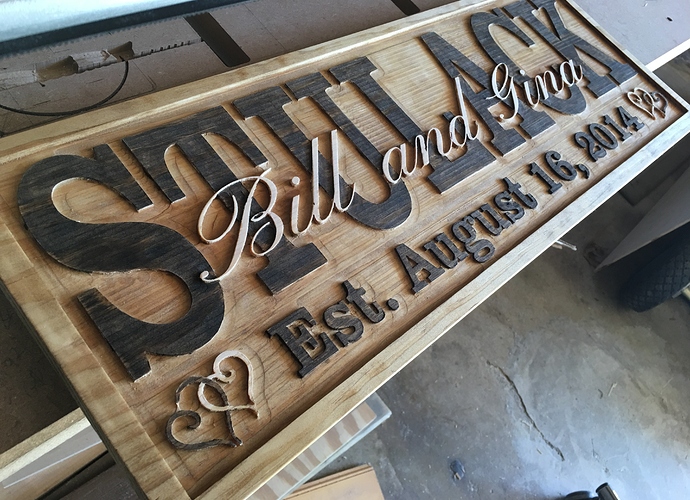 I think it looks really good. You might consider painting the lightest parts with white paint. Paint shouldn’t run as much.

Have you ever used milk paint? I haven’t but I know it leaves a little of the grain showing. Maybe you can mix it to the perfect consistency to keep it from spreading, but still watered down enough to have the grain show through.

Another option is trying to protect the parts you don’t want stained with some poly first. I wonder if you could do that before you cut it, even… Spread some poly on the white parts, then cut them out, then cut to the black, then stain and poly that, then cut down the rest of the way and stain and poly the bottom. Just brainstorming here. Some Old Guy tried carving through the tape, but that didn’t work out, IIRC.

w.r.t. the mill marks in the very deepest parts. Do you know, was your last pass a full depth cut? I had some similar marks on my cabinet door, and I was cutting 1mm/pass and 3mm total. I wish I would have done 0.95mm/pass or cut to 3.1mm. I think the board sort of flexed after that much material was removed (or something shifted in the CNC, but I think the former).

I’m only a novice, but I think the big part was using the below router bit. There were a few places that is plunged straight down and back up, and of course with that notch it left a dimple. So if I remember my cuts were, 2mm rough, 2mm finish, then another 2mm rough and 2mm finish @ 1mm/pass. Can you explain the .95mm or cut to 2.1mm (in my case). What does that do? Help with the board flex? 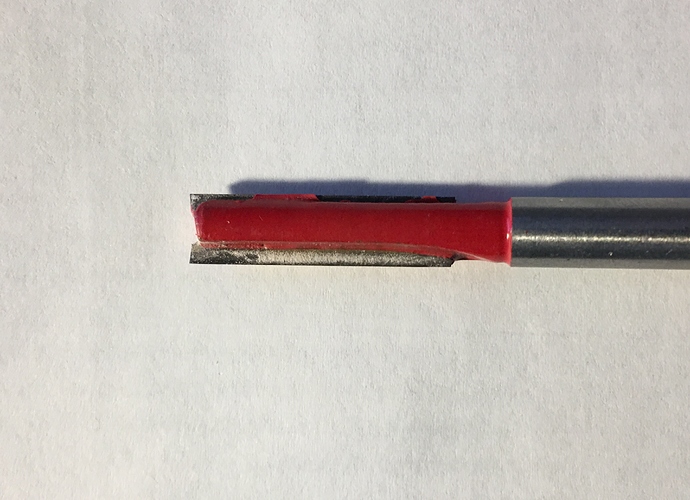 I’m also a novice, and I studied physics in college, so be careful of my hairbrained ideas.

In the case of my cabinet door (https://www.v1engineering.com/forum/topic/mpcnc-cabinet-transformation/) it did most of the pocketing first, to a depth of 3mm (IIRC, I can’t remember). After removing all that material, I think the door bent up a little, and it ended up just 0.1mm or 0.2mm higher in some places. Then, it did the fine tracing around the edges (again in 1mm passes) but since it had bowed up, it dug a little deeper, so the traces around the edges are deeper than the pocketing. Oh now that I look at my post, it was to 1.5mm. I bet I did that in one pass. I should have done 1.4, then a 0.1 cut or something.

My thoughts on this were that if I did a pocket to almost the full depth, and then did another cut, just a little deeper, then it would remove enough to clean it up, but not enough to cause more flexing. Then the trim passes would go to the correct depth. I could do that by making my final depth slightly deeper (3.1) or make each pass slightly less (0.95mm/pass, then it would be at 2.85mm, and have to make another 0.15mm pass). Even easier is probably to just make two tool paths, one to a depth of 2.85, and one with a depth at 3.0, starting at 2.85. That would probably do them in a better order too.

That bit shape definitely exaggerates things, I understand better how some of those marks are made.

If the finish cut edges are bothering you, you could always use a power sander (or hand sand =S ) it down to reduce the visibility of the lines.

other ways you could reduce that edge effect in future cuts, would be (in no particular order):

Zeenon, the wedding sign looks great.
Can you tell me how you modeled it and how many tool changes?
Was this a 3D model or a series of 2D cuts each with a different depth?
Estlcam?

To make this do you extrude the tallest text first and work your way down? Are there any tutorials on making something like this?

I think it turned out awesome. My wife would like to be able to do things like this.

I can give to advice to this. As I have been making signs for years by hand with a Dremel.
Finishing is tricky with stain.
Take an Ex-actor knife and lightly score the wood along where the stain will be different.
Just enough to cut the grain and stop the bleed.
It will not be noticeable unless you examine it with a magnifing glass.

Try it on a practice piece and see. about a 1/16 inch deep.
When finished with a few Poly coats and it will look great.

I can give to advice to this. As I have been making signs for years by hand with a Dremel.
Finishing is tricky with stain.
Take an Ex-actor knife and lightly score the wood along where the stain will be different.
Just enough to cut the grain and stop the bleed.
It will not be noticeable unless you examine it with a magnifying glass.

Try it on a practice piece and see. about a 1/16 inch deep.
When finished with a few Poly coats and it will look great.

The milling looks great, the sign came out great. I want to to learn how to do this. I am still at the beginner beginner level.