Weird cutting air issue, not what you think 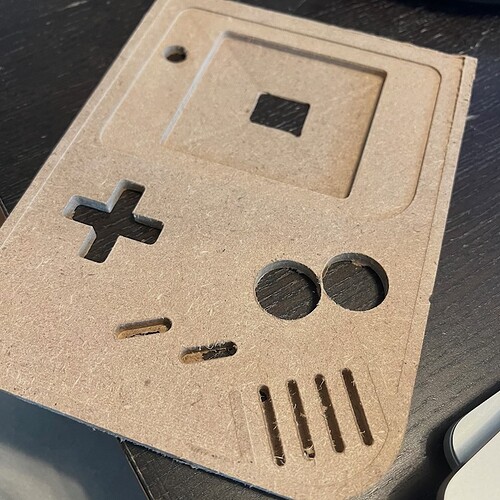 I’m going to apologize in advance because this is not a plea for assistance. I just wanted to share something I was doing wrong that ended up being really confusing and sent me in the wrong direction. I thought maybe it would possibly help someone else.

I finally finished building and wiring up my Primo(24"x24"). I was attempting to make my first cut using a combination of Fusion 360 and CNC.js. I know, I know, Estlcam is recommended, I was just hoping to save a few bucks. My first print was going to be an SVG of a Gameboy I found into a piece of scrap MDF.

Anywho, I got everything setup and zeroed and initially it appeared to be cutting fine. I was super stoked that this worked as planned. As the cut moved to the second pocket cut at a slightly higher depth(?), I noticed it was “cutting air”. I canceled the cut and re-zeroed everything, and tried again on the exact same piece of wood.

Since it was already partially cut I couldn’t see anything wrong with the already cut pocket. Second pocket, all air again.

I tried re-installing the bit, reading the g-code, re-doing the cut configurations, re-zeroing over and over, re-checking every measurement I could think of, and reseating/tightening every ball bearing on the z-axis. Nothing made a difference.

About 9-10 attempts in, I saw what it was. Right as it was making the first cut, it would have a little bit of chatter that would vibrate the bit up into the chuck/collet.

I am using an adapter that steps the 1/4" collet down to a 1/8". I thought I had it seated properly, and the bit felt like it was in there super tight. It was not. Once I pulled the collet out and examined how the adapter sat in it, I could see I did not have it in far enough.

Once I seated it in there properly, there was no more chatter, and no more bt getting pushed up into the router. The cut went as perfectly as I imagined it would the first time.

I was certain my issue was software related but it was “not having my tool installed properly” related.

If anyone has this same issue I hope this post helps.

I know, I know, Estlcam is recommended, I was just hoping to save a few bucks.

Is EstlCAM no longer free? When I got it you could use it as long as you didn’t mind waiting for the delayed action that could be eliminated by paying the fee.

I never made it that far. I saw it had a free trial and was $60 otherwise.

I’m already a F360 user anyways so it just made sense to start there.

I never made it that far. I saw it had a free trial and was $60 otherwise.

Maybe someone will know if you can still use it for free which I did for a while, it used to impose I think a 60 second delay with some steps but was fully functional, I wound up paying the $59 fee to eliminate the delay. If no answer here it may be worth Emailing them and asking. It might come in handy for you.

if you can still use it for free

Yes, you can, is full featured. When exporting/saving gcode, Estlcam makes you wait 1 second longer than the wait period when you previously exported. Estlcam’s neat ratcheting nag dialog eventually wore me down into paying, even though I’ve never paid for Fusion 360 in the past 2yrs. Nicely played Christian. For me, Estlcam is a useful app that feels faster to use than Fusion for less complicated 2D/2.5D cuts/carves.

Estlcam, seems to be implemented in VB .NET 4.0, compiled to non obfuscated IL

Estlcam, seems to be implemented in VB .NET 4.0, compiled to non obfuscated IL

Linux C++ developer here. What does this mean? I am guessing non obfuscated means it still has the symbols. But the rest is jibberish.

Hey @jeffeb3, Estlcam has been compiled in a way that can be decompiled back to C#/VB.Net based code. Comments and local variable names will be unavailable. But, yes, the binary does contain enough symbolic information that class, property and method implementation names, and logic even, can be read to better understand how Estlcam works internally, if someone’s curious.

Estlcam’s neat ratcheting nag dialog eventually wore me down into paying, even though I’ve never paid for Fusion 360 in the past 2yrs.

Me too. Difference there being that if Fusion360 did that to me, I’d just stop using it. It’s yearly licensing model and high price make it completely not worth the cost to me. The one-time fee foe Estlcam was comparatively easy to swallow, and I know that Christian is a small outfit, notike Autodesk. I try to pay the little guys when I can, and when it’s something I appreciate.

Aha. I see. Thanks for the explanation. The only C# I’ve done is running someone else’s code in mono. So zero

Will share my armchair opinions about Fusion’s current subscription options/pricing in a separate topic. Feel like they could be doing better for themselves and their Customers, but what do I know.