So… I have an Amazon 3018 CNC. I never really did much with it, and while learning to manage software and CAM work, I managed to break the spindle holder. Got an STL from the seller, and tried printing a replacement only to find that it’s not the same one. Also, the LM8UU bearings are pressed into the printed plastic, and it’s just a royal pain. I could try making a whole new Z axis, I suppose… Or try something else.

So there’s some 2020 extrusion and associated hardware, X, Y and Z motors, leadscrews, couplers, and a 50mm spindle, the GRBL control board, which also handles spindle speed, though I’ve never used any setting but “off” and “on”.

I’m not sure of the quality of the motors, but I have plenty of NEMA 17 motors, so not too worried.

It was a cheap enough kit, and I won’t be heartbroken to let it go to waste, but… I don’t like letting things go to waste.

I kind of think that the cheap spindle is what caused the plastic break. I’m considering the idea of an LED laser, though the 3018 bed size is a bit more limiting than I otherwise like. Can probably just clamp the crap out of the plastic and epoxy it to hold the laser, since it shouldn’t have to deal with any lateral stresses. Not sure about what firmware changes would need to be made tot he GRBL controller.

Alternately, I could build a new Z axis. Looks like it would need the whole thing. This could probably be made better using the MPCNC than 3D printing.

Or I can throw the pile of parts in my ever-expanding pile of excess 3D printer/CNC parts. Some of the extrusion might end up in a 3D printer design later.

Or… Something else? There’s got to be some cool project for these parts to get used somewhere…

I’m interested what ideas people have. I have an old 3020 from China that hasn’t been used in forever. I tossed the controller before even turning it on the first time and replaced it with a smoothie board. The machine worked fine but I did not understand Dremel bits at all.

Or I can throw the pile of parts in my ever-expanding pile of excess 3D printer/CNC parts.

This is the most likely fate for my machine. Well, after 5 more years when I finally get around to it.

What about a cnc dedicated to edge joinery. I am thinking of a pantarouter or horizontal mortice machine.

Donate it to a local Makers club?

How about a small cnc saw? Not sure how it would be useful but could be a fun project.

It sounds as though you have a bit of experience and a stash of parts already… but admit that some aspects of tinkering with it may be a “royal pain”. I don’t know your background so maybe I’m preaching to the choir but here are a few of my thoughts on the subject…

I actually have a couple of these 3018-type machines and have dismantled one of them (along with a FolgerTech all-aluminum 3d printer) for parts, since I have others to play with. They can be incredible educational tools. If you find they aren’t suitable for milling and engraving small pieces of thin material with the supplied spindle… then hang a diode laser on it and start engraving pens or somesuch. These small machines are pretty sturdy but will never be suitable for hard use (unless everything you produce is tiny)… but they are a great teaching tools at a minimum and you can learn a ton from them. Most have a Grbl-based controller and lead-screw drive on all axes. They have relatively few printed parts and are generally put together with easily disassembled aluminum extrusions, couplers, stepper motors, etc.

Repairing one is one option. You may need to learn how to print – or maybe even design and adapt – replacement parts and/or a new laser mount, flash the controller with a later version of Grbl, and/or find a fun new way to control it… my favorite is Pi3B+ with Jeff’s V1Pi image with CNC.js and Grbl 1.1h.

Repurposing it is another option. An Egg-bot, a drawing machine, a rolling plotter, or a cantilevered laser engraver. Small… but again instructive. Many of the same parts but configured differently… and you can probably use the same controller and workflow. Try converting one or more axes to belt drive (or other) and lift a pen or drive laser. You may need to learn some exciting new software… Inkscape and a host of plugins, Lightburn, etc.

Most all the physical parts of these 3018 machines are reusable… or replaceable. What you can learn with one – intact or repurposed – is scalable/transferable to larger machines. Learning to design or adapt printed parts is well worth the time and effort to learn how to do it. If my house was on fire and I could save only one machine of the dozen or so machines I currently have intact… hands down, it’d be the Prusa printer. With it, I can rebuild/replace any of the others… this is not true with any other machine.

Fair enough, I suppose that some more info on my background and experience is in order.

My first 3D printer was maybe 6 years ago, I bought an I3 kit which was complete and utter crap. But I learned a lot trying to improve it. Eventually that hit its limits, and I wasn’t very happy with it. Then I bought a somewhat better kit. It had a bunch of proprietary parts in it, and again, I went through the upgrade and repair cycle with it.

Then I designed and built my current printer. (In TinkerCAD, which was a mistake, but it was the tool that I’d learned well enough to do it.) I’m quite happy with it, and it uses parts that I can easily replace. In my workings with previous printers, I had (incorrectly) identified the belt drives as a source of problems, so my design was all leadscrew based. It actually works very well, but I’m in the process of redesigning based on CoreXY, now that I have my Primo. The design looks like this: 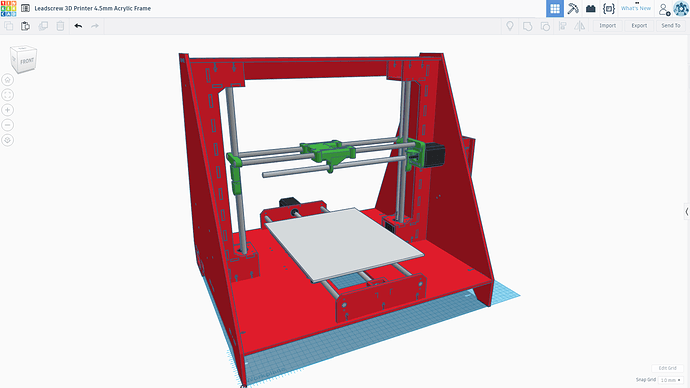 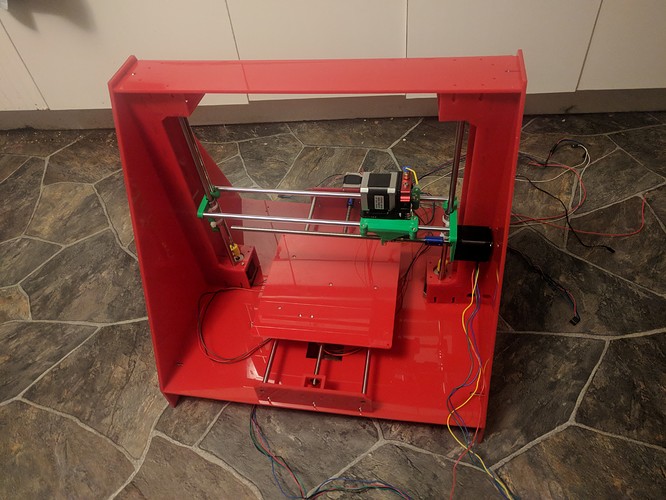 Sometime in this period, I bought that GRBL 3018, and started trying to learn the CAM portion of its use. I obviously made some miscalculations there, and the result is a busted Z axis on a cheap machine. I’ve sort of repaired it a couple times…

I’m reasonably confident in my 3D printing skills. I kind of think that I can make TinkerCAD sit up and beg, though I realize that it is an inherently limited platform. Other hobbies that I have are my car. I built the engine from a bare block up. The block was sent tot he machine shop bored for forged pistons, and I set it up with a rather oversized turbocharger, and making more than double the factory rated power. I also had another Supra that I had set up as an IASCA (International Auto Sound Challenge Association) competition car, competing in the Sound Quality division for three years. It featured a fair amount of fibreglass fabrication in the hatchback and in the doors, and more than a little electronics customization. I also built my home theatre system. The amplifier designs came from the Internet. Well, more specifically from Rod Elliot’s web pages, but I made and populated the circuit boards for the pre-amps, signal processors and amplifiers. I selected the drivers, and designed and built the speaker enclosures. (And after breaking a basement window, vowed never to turn the amplifiers past “3” ever again.) Also in the home theatre, my projector is of the DIY variant. It uses a small WUXGA LCD screen and controller, and a 400W metal halide lamp to project a 144" diagonal image on the wall.

I’ve been around woodworking shops for most of my life, my father was a carpenter and general contractor. I’m a computer programmer by trade. I’m sure that I could design and print a new Z axis for this machine, and either salvage the bearings and rods that it’s using, or just grab new ones from my parts pile. I have some confidence in my fabrication and design capabilities. The original purpose of the 3018 was supposed to be circuit boards, but of course my most recent design calls for 24x24cm, which it can’t do, though the Primo certainly can.

SO, what I’m looking for is ideas. I actually like the idea of devoting a machine to edge joinery. The tricky part there is going to be designing the machine to clamp the part. I’m considering some ideas. I’m always open to more. As you can see, it’s not like I wouldn’t have a use for some specialty machines.

The local makerspace might like it, sure… Except of course they’re currently not allowed to meet because of the pandemic. They have Most of my old I3 in their spare parts bin. I think someone was turning it back into a printer. I wish them luck.

Anyway, this is me. The man with too many hobbies.