I’ve continued my recent messing about with relief maps, and eventually found a way to create the country border shape I want. Most of the web sites that create data create rectangles, but I found if I took a screeshot of the rectangle in the larger map, then imported an svg of the country from elsewhere, I could line things up enough for it to look reasonable. I planned to remove all the material outside the border, but decided, after cutting the border, I quite like it remaining there. I filled it with resin (why not) and got quite a pleasant effect. Now if I could illuminate very gently from the edges, I think I could really make the relief stand out. I’m just not sure how to do it, any thoughts? Here is with no illumination and with a torch just pointed at the edge. 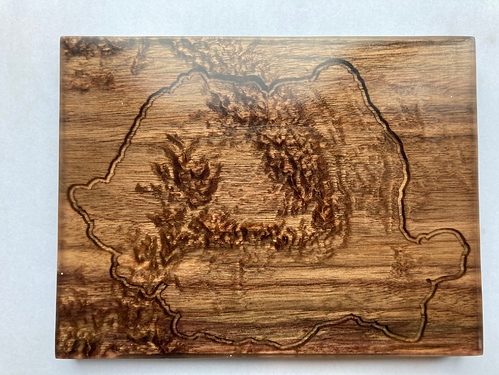 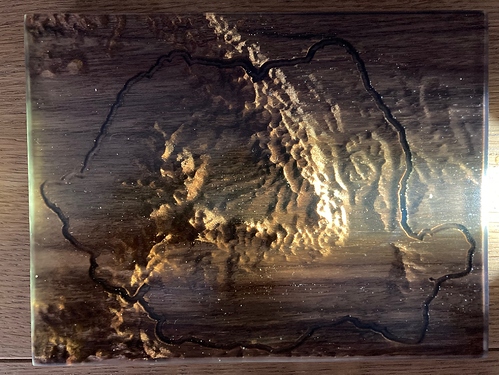 This is Romania btw, the Carpathian mountains being prominent. Holland on the back.

If you light the whole perimeter, there won’t be any shadows. That doesn’t seem good to me.

If you light one point, it will look like there is a sun at that specific point. A lot like the torch/flashlight you’re doing there. A point also has the disadvantage of needing a very strong single point of light, which makes more heat and it a bit more expensive.

If you lighted that edge, it would be like there was sunlight from that direction, but very far away. Sort of.

It might be tacky, or take away from the beauty of the wood. But it would be fun to make a strip of light and have a different pixel light up at different times of day. Also, it would require some programming and the programmable leds don’t do a nice warm bright white. But it would be neat to see it change through the day.

I think the easiest/classy way would be to put it in a shadow box with edge lighting under the frame.

That is a really neat carving.

I love the idea of a changing direction of light, especially if it was correlated with the time for a sunrise/sunset etc That would be brilliant. I think it’ll take me some time to piece together exactly how to do it. What I might try short term is LEDs sunk into an opaque white resin border along two sides, with a layer of black resin on top of that acting as a kind of frame. Only way to find out what works. Anyway, lots to think about, thanks for the input @jeffeb3, it’s much appreciated.

LED’s across the top and the bottom. Turn on the LED’s in pairs, one on top, one on bottom. Cycle through the LEDs depending on hour of the day. Maybe recess the LEDs into pockets to help make them more directional to reduce how wide the light beam is.

Some WS2812 strips, an esp32, and a big power supply would be enough to do it. Minimal wiring needed, but then you need some software. It is certainly fun to play with.