Which controller for Low Rider (UK)

Those are really helpful links, thanks.
Perhaps I should have started with them.

Lots more learning still to do.

https://all3dp.com/2/best-free-cam-software/ has a good round up of free CAM software too.

Thanks for the link. There are tools I did not know about on this list. Most of the MPCNCs in the world run Marlin firmware. The path of least resistance for most CAD software for CNC use is GRBL firmware. Marlin and GRBL g-code definitions are different, and not all CAD software have post processors that will generate g-code that runs on Marlin. For example, I’ve never seen someone on this forum use Carbide Create to generate g-code for Marlin (it has come up a couple of times). The post processor to generate the g-code is often the sticking point on whether a particular CNC program can be used for a particular MPCNC build.

And that’s another thing for me to try to find out.

I know that TurboCad will save as .stl not sure about FreeCad yet. Haven’t got that far with it.

My instant dislike (probably irrational) of Fusion 360 is that it’s cloud based. At least with the previous two mentioned, I can use them when out on the boat and there’s no wifi. Also, I have ownership of any drawings I produce. I have a choice about sharing them freely, and, as some of my drawings are for commercially sensitive stuff, that’s important.

Clearly, as I’m going down the Marlin route (am I?) with a Rambo 1.4, I will need to check which programmes will speak the same lingo. (I think I’m on the right track here, please correct if wrong.)

My instant dislike (probably irrational) of Fusion 360 is that it’s cloud based. At least with the previous two mentioned, I can use them when out on the boat and there’s no wifi.

Fusion 360 allows for offline usage. They place a limit on it…I think you can be offline 21 days of continuous use before you need to connect to the cloud. This limit allows them to enforce their licences and updates.

Also, I have ownership of any drawings I produce. I have a choice about sharing them freely, and, as some of my drawings are for commercially sensitive stuff, that’s important.

To the best of my knowledge, your work is private and you maintain ownership. Being cloud based is more about allowing (if you choose) collaborative work. Personally I find it convenient since I move between my desktop and my laptop. But if you are using it for commercial work, you may violate the personal (free) license. Depends on what you are doing.

Clearly, as I’m going down the Marlin route (am I?) with a Rambo 1.4, I will need to check which programmes will speak the same lingo.

It is the post processor that you use for the CAM work that needs to be checked. You will be using Marlin with the Rambo board. I read somewhere about a version of GRBL that works on the Rambo boards, but I don’t know of anyone using it.

The V1 firmware for the Rambo is based on Marlin, so you’ll want to look for tools that generate “Marlin-flavored” gcode.

Gcode is just a plain text file where the instructions follow (one of several) standard syntaxes. It is possible for someone who understands two gcode variations to write a “translator.” Many CAM programs will create either a particular standard or sort of a proto-standard gcode that can be modified by a particular post-processor.

I get the feeling that if you’ve got background in grep and sed sorts of text manipulation operations, and with access to the proper set of documentation, generating a gcode post-processor is not a particularly steep hill to climb. It’s just not a hill that catches my interest, so I’m happy to leverage other folks’ working tool chains.

Stephen Hawes is a You-Tuber I like to watch, due in part to his making good progress on a complex project, and in a larger part due to his transparent joy when he solves a particular problem. He’s about ready to shift from development to production, and he recently talked on his channel about making the choice between “solving a problem” or “buying a tool.”

Although a bit of a tool junkie (they’re generally less expensive to collect and take up less space than boats) I’m at the point in my life where I’m often more interested in buying the tool than going down the problem solving path, but the MPCNC/LowRider is by definition a tool you build yourself and then, based on the projects you’re planning on taking on, integrate into a software/tool/material workflow that meets your needs. Each of those elements presents some learning opportunities, but by and large there’s a pretty smoothly warn path. I’m confident that the folks here on the forums will be both willing and able to help you get past any sticky points.

I did say that this is all new to me. Clearly, I need to revisit Fusion 360 and review my prejudices.
Equally, if Fusion 360 is the ‘go to’ programme for drawing and is used extensively here, then that’s the one I should be using.
As for ‘commercial’, my steam engine drawings are for my own use but there are some commercial folk that would love to get their hands on them. Everything else I’d be glad to share.
I did get the Marlin bit right though :-).
My only previous experience of g-codes involved writing down a g-code sequence on paper and manually producing a punched tape for the machine, then testing it on the machine - it was a long time ago, ah, those were the days!
I’ve had a read of the pages here on work flow which have cleared up a bit of my muddled thinking. I need to re-visit them today to check. Given that I left the starting blocks 3 weeks ago with zero knowledge/understanding, I’m doing okay (but only because of the help and support here).

If I have it right, essentially it is design/draw (CAD) save in g-code, post process (CAM) to get tool sizes and paths, materials depth of cut and so on, transfer to machine motherboard where Marlin will make the stepper motors actuate.

And the key is to get those three stages talking to each other. (???)

Definitely no background in grep and sed, I had to google them to find out what they were. On the other hand, the philosophy of my workshop (that I tell my children and grandchildren) is that we can make anything here, though some things take a little longer (getting tools, knowledge, etc.). Our boat is a good example - we had the steel hull shell made to our specs and have fitted out everything ourselves, with the wood parts made in the workshop then taken to the boat for fitting. There has been a lot of learning, a few mistakes to correct and a bucket load of fun and satisfaction.

I do like the idea of the smooth and well worn path though, and very grateful for this forum and the people on it.

I have little experience, I started a year ago reading this forum and related documentation, and built the MPCNC.
I found it easy to draw in CAD, save the file in DXF format, import it into ESTLCAM to generate the gcode which I then load on the MPCNC controller with a memory card.
ESTLCAM is free to download and try. The trial version has all the features then it is better to buy the license to avoid the timer.
In my opinion it’s worth all the money.
Below is the link for the basics: EstlCAM Setup - V1 Engineering Documentation
Have fun

Another one to look at, certainly worth a try.
I’ve just signed up for Fusion 360 so going to be busy getting my head round that for a while.

Thanks to everyone for your input and comments, I feel that I’m moving forward.

I use FreeCAD, and it does export .DXF files which work great for Estlcam, and also generated .STL files which I use for 3D printing. I use Estlcam to generate the Gcode files for the router. The Marlin output from Estlcam works fine, and with a small caveat, works fine for RepRap Firmware on the Duet as well. I use some of the same files on both my Primo (RRF) and my LowRider (Marlin) just fine.

Thank for that. It’s good to know specifics that are proven to work.

First look at Fusion seems promising. I do find FreeCad so very strange after simple 2d cad. I need a gallon of perseverance to get one or both operational in my head. Clearly this is the most pressing matter for me now.

Assembly of Lowrider has begun, that’s the easy bit

if Fusion 360 is the ‘go to’ programme for drawing and is used extensively here, then that’s the one I should be using.

That is not the case. Use it for cad, or freecad or inkscape, or whatever and then use estlcam. Or fusion, if you prefer.

I agree, you can’t go wrong with Inkscape and Estlcam!

I still use both, but find myself using Vcarve more and more (worth the investment in my opinion).

Plenty of videos on Youtube for all three pieces of software.

EstlCAM seems to carry a lot of support. I shall have a look, thanks everyone. And I must look at Vcarve and Inkscape. They seem to offer different flavours. One (or both) of them may serve me well to make printing blocks, either relief or intaglio.

To produce the .dxl file for a 3d item, there are many to choose from. I guess it’s down to which one I get a handle on first (easiest for me). As I’m stuck on a chair much of the day (though my back is making great recovery) I have time to play. In the meantime, I’m assembling bits for the Lowrider.

If you’re used to 2D modeling, you might also check out librecad. It is free and open source, but acts like autocad did 20 years ago. It isn’t as powerful as even the sketch tools of modern cad, but if you’re used to that kind of thing, it can export dxfs just fine.

Hi David, I’m in Lancashire, on border to Yorkshire near Clitheroe I’m having same thoughts on main board I have most of build done, if you want to text me we can perhaps video message and help each other out ?? 07815194884 regards Lee

even better, a Northerner

I shall text you for sure - let me get the plates assembled, the pipework is coming early this week, all being well. I’m leaving the table until the whole carriage is assembled. I’ve gone for 1/3 sheet, 48" x 32" working zone but will still need to make it collapsible or at least storable. Space is at a premium.

It will be good to have someone at the end of a phone to compare notes with.

Brill mine is ready to wire I have followed some updates from Karlis Zalitis off YouTube I’ve made the double deck and am currently fitting belts and tensioners I’m looking towards the SKR pro 1.2 board with TB 6600 drivers so have option to upgrade steppers to NEMA 23 in future as I’m running a 1.5kw spindle and I have ability to fit a 2.2kw spindle weigh 2.7kg an 5.8 kg respectively I’ve got 1220x1700 upgradeable to 14 ft long bench excuse the mess having a tidy up as we speak 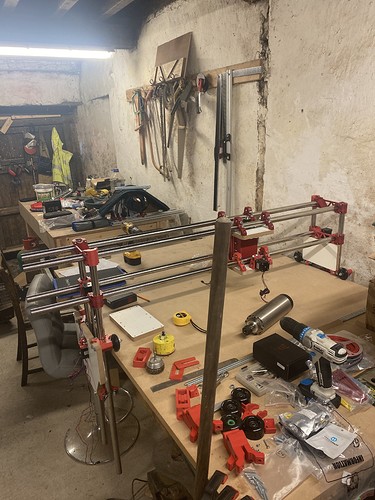 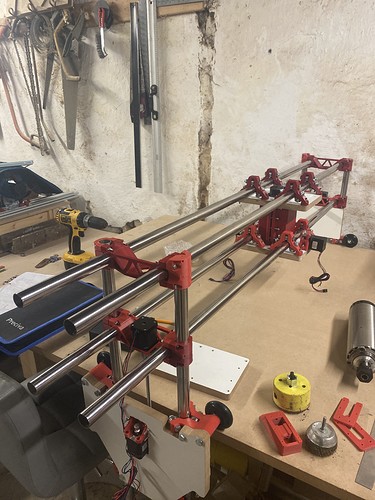 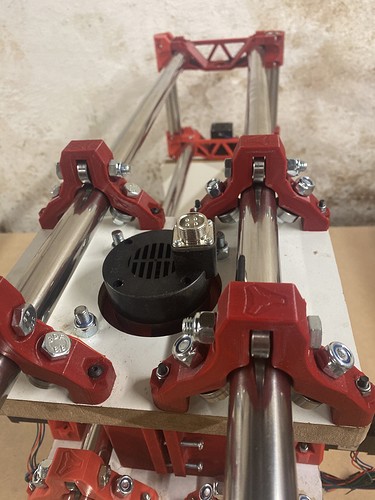 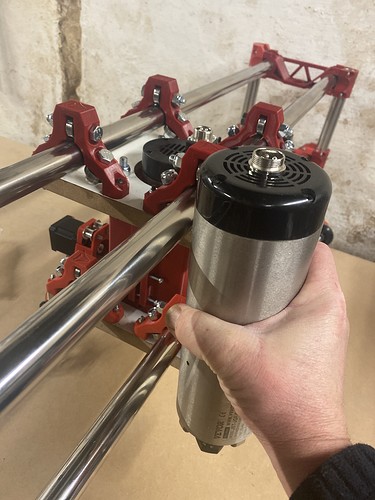 Brilliant.
I can see the need for the double deck 4 bar carriage with the extra weight and power of those spindles.
I’ve bought a Katsu router (rebadged Makita I think), cheap and cheerful to get me started.
I have got 500mm z axis bars though so I can double-deck in the future.
By the way, I think your workshop looks pretty tidy. Too clean = no work