Which process? SVG or STL?

I’m working on making myself a Nuka Cola sign. I’ve 2 attempts that didn’t turn out quite right and I’m going to do a 3rd soon. I don’t mind that they’re flawed in that I learned a bunch of stuff and I’m just using scrap wood I had around.

What I’m wondering is this: Is there a way of turning line drawings into engravings that works so well that everyone does it the same way, or is it as varied as I think it probably is. I have done it 2 different ways, and could probably find several more, there are certainly a bunch of varied pieces of software that could be used.

I found a design that I liked that happened to be in JPG form. I cleaned up some of the random “distressed” marks that were all over it using Gimp and then brought that image into Inkscape where I used the trace bitmap feature to get line art. This much is the same for both of the things I tried next.

Method 1: I created an SVG in Inkscape for each of the layers of the carving. These files are just black and white, with filled areas that I want to carve. I ran these files through jscut (jscut.org) which is a really simple way to get some toolpaths. I like how the results turned out (method 1 image) but I goofed up the files while loading/saving settings on the website and didn’t know it until I carved them. The 2 different layers weren’t carved from the same origin point and are out of registration from one another. I didn’t turn the machine off, so I think 0,0,0 should have been the same, but some setting must have been different and I’ll chalk up the failure to operator error. Notice that the edges of the cuts were done as paths and they are nice and smooth.

Method 2: I imported the lines for all the layers as a single SVG into Fusion 360 and proceeded to extrude some of the shapes upward and some of the shapes downward. (This took a week of learning Fusion 360. :D) The end result of this was that I have a 3d model of what I want to carve that I exported as an STL file. I was intimidated by how complex I thought using the Fusion 360 CAM process looked and that’s how I chose to bring that STL over to Estlcam. Estlcam seems fairly simple at least when doing simple things like in the beginner tutorials on this website and also turning an STL into a carving was pretty easy. I made a mistake in this artwork that’s not in the picture, but the bigger issue I had here was that the lines were created as the tool was lifted in and out of the cutting area instead of as paths and they have those jagged edges.

I guess I have a couple more questions. One, can a carving from an STL produce nice edges instead of the jagged ones? Two, would I be better off using Fusion and generating the toolpaths from the 3d model? And finally, should I just keep it simple when doing something like this that’s more of a 2-dimensional thing and just cut the layers individually?

I’m leaning toward doing the individual layer approach, and I’ve re-created the g-code without making the mistake from before and then I combined the 2 files into a single file (removing the few redundant lines at the end of the first file). Unfortunately, I will have to wait until the weekend to have the time to let this thing carve itself again. 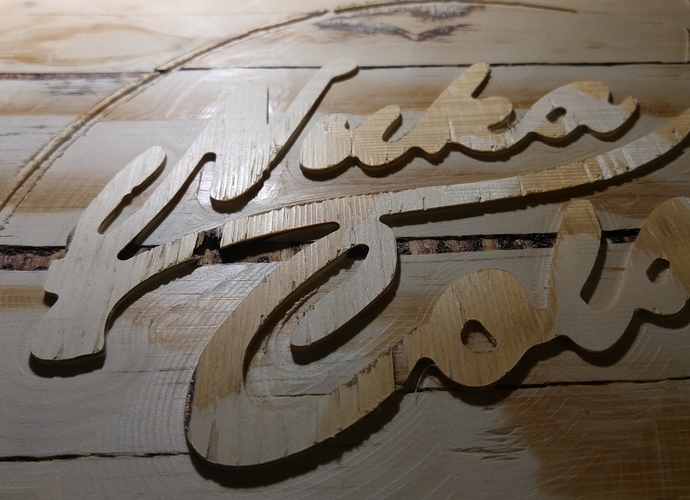 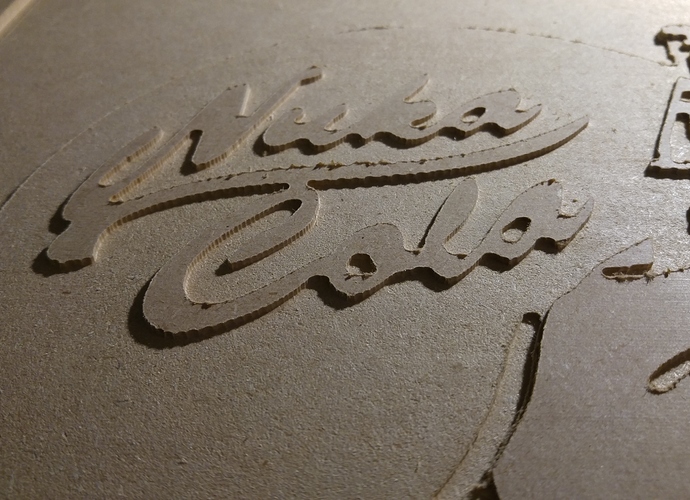 Best would be to save it as a DXF and just use the paths. I am pretty sure inkscape does it if not there is another format that works. Remind me to check if you can’t save to dxf. Stl is more for 3D carving with a tiny stepover to eliminate the lines.

Save all your paths in one file, and cut each one starting from and ending at different levels. You can see an example in my old intermediate how-to.

For now I would stay away from FusionCAM. 99% of the time it is overly complicated for the task at hand.

I think that answers everything.

Yeah, Inkscape will make dxfs. I’ve read somewhere that svg and dxf are the same.

I just read over the intermediate tutorial last night. I’ll have to revisit that one before it begins to make sense.

Use DXF you shouldn’t have any issues.

if its any help, i export SVG’s out of inkscape, and then run that through estlcam for my toolpaths.