Why does my mpcnc want to start by going home?

Hey everyone, and a thank you to all of our veterans today. I’m back at this after a long break. I assembled my mpcnc like 2 years ago, successfully run the Test Crown and successfully created a toolpath in Fusion 360 and cut it out in foam for lost foam casting and haven’t touched it since.

I’ve spent a little time over the past week dusting things off, did a refresher in fusion to create tool paths and such, added an air nozzle to remove chips, and some cable management.

The problems i’m having started with Repetier which is what i used before to send the code. I would get an error message. So i skipped repetier and tried running it straight from a a USB flash drive in the TFT display. The machine wants to home all axes first. If I recall correctly, that would be a g28 command in my code, but there is no g28 in my code.

After a lot of tinkering in fusion with no change, I remembered about the Test Crown file. I move the router out into the middle of machine, Z up 20mm or more, select the Test Crown file from the USB in the TFT and hit print. It runs right for home. Why? Isn’t it supposed to start from its current position?

I’ve basically forgot everything i learned about gcodes and machining in general, figured it would come back to me once i start playing around with it again but I can’t figure out what has changed here.

I do remember flashing the firmware on the TFT to the newer UNIFIED whatevers…. Would that have anything to do with wanting to do a home first before starting a print? Like i said, i only drew the crown and 1 machining operation since it was built, but I can’t recall if the update to the TFT firmware was before or after those 2 successes.

I thought maybe something happened to the firmware on the SKR so I did download and install jeffeb3 s
Skr1p3_Dual_8825-2.0.92 firmware. The axis were moving backwards, i have successfully re-compiled the firmware to switch the directions, so i’m able to navigate VScode a bit, but still mostly lost. Lol

Even so, the machine still wants to home when starting the Test Crown. Is this something that could be in the TFT firmware that i updated? I’m confused and could use some help.

I don’t have a touch plate thingy on my Z so this homing thing isn’t very fun. 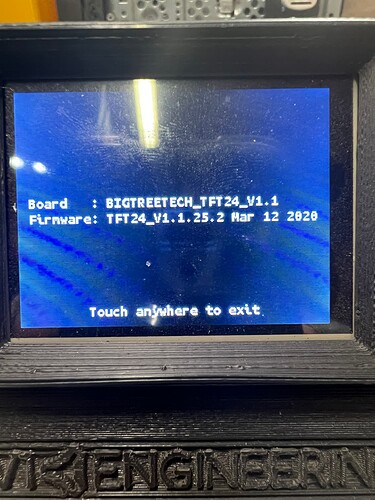 Do you have a config.ini file for the screen? I would look in that for a G28.

Ryan’s repo has a config.ini, and a release of the screen firmware.

You can alo switch to marlin mode and use an sd card (in the screen) instead. That takes at least half the software out of the picture.

Thanks. I figured it out. I had no idea about the config.ini

I totally missed the down arrow indicating more options in the “features” menu.

Looking forward to finally putting the mpcnc to use with a few upcoming projects.

Still haven’t figured out how to get rid of the 420 S1 error that randomly pops up.