New machine is up and running and working well, but I’m having quite a bit of trouble milling or contouring harder material. I have not seen this addressed anywhere in the forums so far.

Cutting softer woods like pine or poplar are mostly fine, but I’ve been trying to make some boxes with hickory and maple (an extremely hard sample). I’ve been able to do ramps in pine cutting .15 in at 40 in/min, and initial cutting of the harder material works with .075 (1.5 mm) DOC and 30 in/min feedrate. However, it is very clear that the Z axis is deflecting sideways with harder material causing not only some nasty sounds, but jumping of the cutting tool because of the variability of the material. This has broken structures on each attempt. In a couple of instances, the end mill has grabbed badly and overwhelmed the steppers, once in the Z direction and once in the Y direction. The deflection happens with soft material, just not as badly. I’m using a .25" carbide end mill.

The picture below is an example of the box. This is very old, seasoned pine. DOC was .125" at 40 in/min feedrate. This chipout on the right side was largely due to the Z axis deflection and chatter.

Yes, I know this is aggressive, but that’s intentional as I need to know the limits of the machine. The MPCNC is using Stainless tubing throughout and is very square.

I’ve used both a Dewalt router and an import spindle. Unfortunately, I can’t mount the spindle as high on the gantry as I’d like so the cutting tool extends below the gantry about 3 inches. I’m printing another tool holder to attach above the regular one which will allow the tool mount to be even with the bottom of the gantry, like with the Dewalt.

However, both the Dewalt and the spindle have the same deflection issue. It seems likely that the longer the tool extension from the gantry, as well as how far the gantry is extended will have a bearing on this behavior due to the mechanical moment from side pressure on the tool.

The solutions I have in mind right now are to ensure the end of the tool mount is even with the bottom of the gantry (like the Dewalt) as well as mount the material higher so that the gantry does not have to extend as far.

Other than that, is there anything to be done to reduce the sideways deflection of the Z axis? I know that this is based in the overall design philosophy of the CNC, which I think is great, but am wondering what can be done to extend the capability.

Thanks in advance. I’ll post pictures of the build shortly. 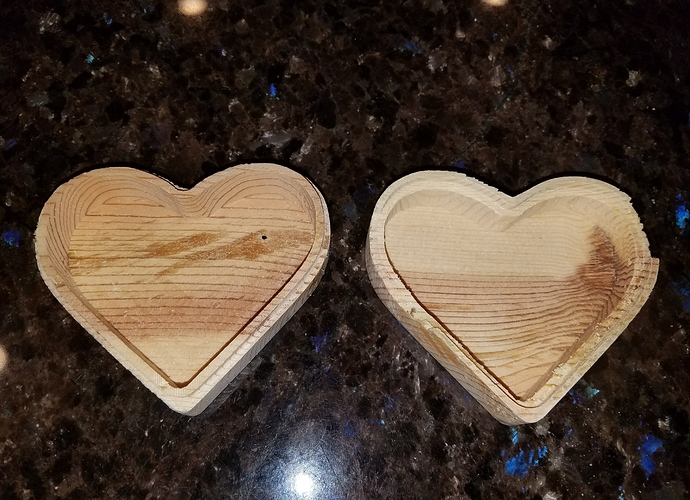 What kind of end mill, how many flutes? Are you sure it is sharp still? Is it rated for plunge cutting?

1/4" endmill is really large for the speeds you expect, double the diameter is more than double the load on the system depending on how hard you are cutting up to 5 times more (plunge). Those are similar to what I use for 1/8" single flute. I have a few videos up of me milling IPE with specs. To make faster cuts the system needs to be balanced. A 1/8’ single flute bit cutting 3 times deeper will cut faster than a 1/4" skim cutting (and the bit will last extremely longer as you are using more of the surface area generally 3-4 times longer because that is how much deeper you can cut).

Relatively speaking wood is wood to most cnc’s Ipe is one of the top 3 densest woods and it cuts ever so slightly slower than pine.

I’m using a 1/4" upcut end mill with 2 flutes. New Whiteside, very sharp. I do understand that it’s a much higher load than a 1/8", but I was hoping to avoid a tool change after milling a fairly deep pocket. I had not considered the 1/8" end mill for the pocket, but am not sure if that’s what you’re suggesting. I can certainly try it out. I’d be concerned about the final finish provided in a pocket.

Are there other things I can try out to avoid Z deflection?

Thanks much for the quick response. I really enjoy this CNC after having working on one I repaired from a not-very-good original build. Very flexible and is a great addition to the shop. Now just trying to get the most out of it.

The surface finish between an eighth inch and quarter inch end mill “should” be nearly identical in wood. It will just take longer for that pocket.

Depending on how hard you can push it. A small short rigid build will be faster with a 1/4", a tall large build will actually be slower.