I’ve seen this problem on and off with my MPCNC and another one I built for my Dad. However, I’ve recently been trying to cut aluminum which is causing the issue every time. The z-axis will drop several millimeters mid cut causing me to abort. It usually happens 10ish minutes in. You can see how it gouged the aluminum while adaptive clearing in the picture. It happens with gcode generated by both Fusion 360 and FreeCAD. The end mill is not dropping out of the spindle (can happen when it heats up and the nut isn’t tight enough). Also, my machine is as low as possible. I have maybe 1.5" of workable Z. It’s almost like the z-motor cuts out for a second. I didn’t feel how hot it was getting but the motor isn’t under much stress.

Any help would be appreciated. Thanks. 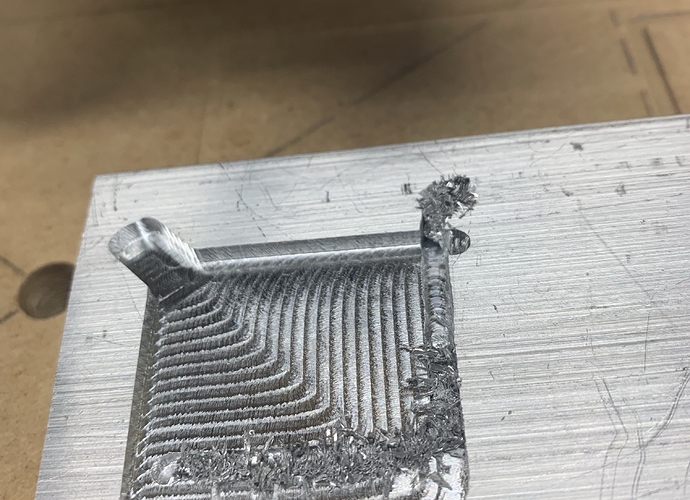 Another user reported a similar problem where it would suddenly drop for no reason: https://www.v1engineering.com/forum/topic/z-axis-powering-down-mid-cut/

One possibility is the stepper drivers going in to thermal shutdown if the current is a bit high and generating slightly more heat than it can dissipate.

Energize the steppers and feel the stepper drivers with your hand. If they feel hot to the touch after a few minutes, then this is almost certainly the culprit. If this is the case, decrease the current and/or add heatsinks and a fan.

Thanks for the suggestion. Turns out my z-axis driver was cranked up to 1.4v so I dropped it to .9 and added cooling. The cut got passed my adaptive clearing operation without any problems and the driver stayed cool to the touch. I’m still trying to get my CAM settings right for aluminum though. I needed to drill an 1/8" hole and it failed (circular operation in Fusion 360 with 0.5mm step down). Half way through drilling, the bit rattled around creating a large (~1/4") uneven hole. I’m assuming I need to use a smaller step down and keep the bit down longer. After the drilling, the contour failed pretty bad using a 0.5mm step down with a 800mm/min feed rate.

Plunging in metal is not easy, and you need a bit that can plunge.

That shallow can work harden, and that is faster than I cut wood. All depending on your endmill and build size of course.

Thanks for the info. I’ll try slowing down the feed rate on the contour operation and do the 1/8" hole on the drill press. The fswizard calculator gave me a feed rate of about 760mm/min for my 1/8" end mill at 30k RPM given my aluminum stock. I do find that it recommends feed rates higher than what works well for me. I’m on a 2’x3’ frame using 1/8" wall thickness aluminum tubing with a 3" work height.

You can adjust it, you just have to pay attention to the first tab, Cutting force, etc. Without spending too much time on it I think if you adjust chip load and keep it under 1-1.4Kg force things will be fine.