Z axis is slipping on one side

My new machine is running great except for one problem: the z axis is occasionally dropping down on one side. I'll start a cut and make sure its level (its often not), and then 10 minutes into a cut it'll be uneven. Most recently the cut was ruined because the router assembly dropped all the way down and got stuck on the board. Pictures of both sides attached.

Its not slipping on the z tubes, it seems to actually be loose inside the stepper and just kind of drop with gravity (I can apply a few pounds of pressure from top and the vertical screw spins the z axis down on this side).

Is there something I need to tighten, or is my stepper faulty? Or any other ideas? 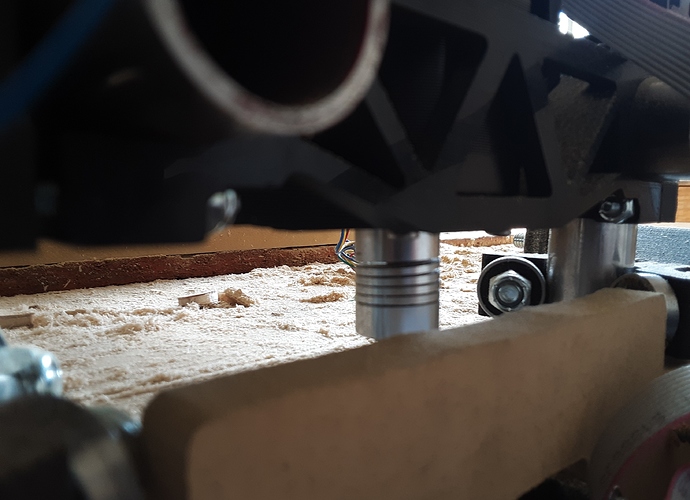 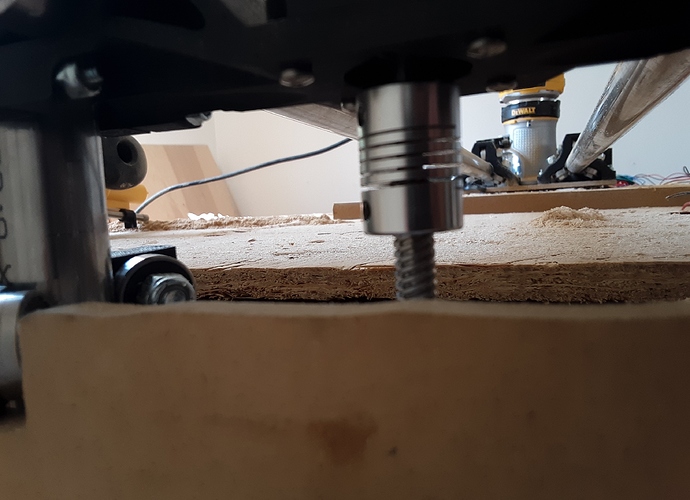 Could be a loose wire.

Im guessing that setscrews in couplers lose up. tight them up and use Loctite.

The set screws are tight, so that’s not it.

It appears that when I connect from my laptop through repetier host, it resets the mini rambo. It’s at this time that the z-axis drops on one side (but never the other). This is dangerous for my bit, but also gets me out of alignment everytime.

So I thought that it sometimes got out of alignment during the run, but now I’m thinking it only happens when I connect, but sometimes it only drops part way, so I hadn’t noticed it right away.

My understanding is that reset during connection is normal, is that correct? If so, how do I prevent the stepper motor from letting the z-axis drop when I connect from my computer through Repetier Host?

I’m not sure if this helps, but here’s the log when I connect and the z-axis on one side drops:

I don’t use Repetier but I rest my Lowrider on two cradles that keep it level and the bit off the work surface until I power things up and the steppers engage. Maybe that could also be a solution to your situation? 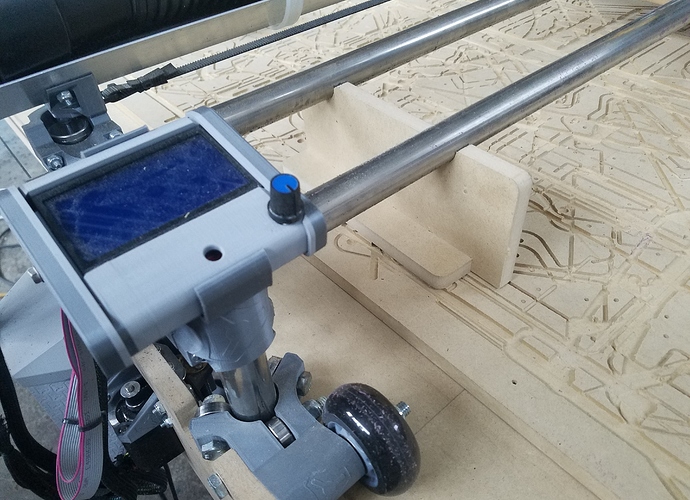 My understanding is that reset during connection is normal, is that correct? If so, how do I prevent the stepper motor from letting the z-axis drop when I connect from my computer through Repetier Host?

Yes. Connect then position your router, or use and LCD and SD card.

So it’s normal that one stepper of the z axis (every time the same one) falls down if a laptop is connected and repetier host is also connected? Or is it caused by a wirering or other problem?

It happens. Is the side that drops the side that the router is sitting at? I’ve noticed in the past that the steppers will lock, then unlock when power is applied to the board. Just for a second, which caused the leadscrew to lose it’s friction, then the weight of the router will push that side down.

I had this problem and didn’t actually notice it until today.

Today I re-routed my wiring through better plastic conduit, and put everything back together. I also had cut two new Y plates and had them cranked down fairly tight.

Then, at the end of cutting a new part, the router side of my Lowrider v2 suddenly dropped down (lead screw and stepper spinning, collet was not slipping.) At first I thought I somehow messed up the wiring. After restarting and raising Z, it dropped again, and I found I could make the opposite side do the same thing by leaning on it with a little force on top of the motor.

So, it appears that I had two problems:

I had seen a few misaligned cuts, with what I thought was X axis skipping, but now I think it was actually from the Z axis collapsing on one side, causing a diagonal cut (oval hole being one symptom.)

So far so good. Made an absolutely perfect part this evening.

Maybe this information will be helpful. I thought the Z axis could lift a lot, but I realized I had quite a bit of weight on it, when you add it all up! 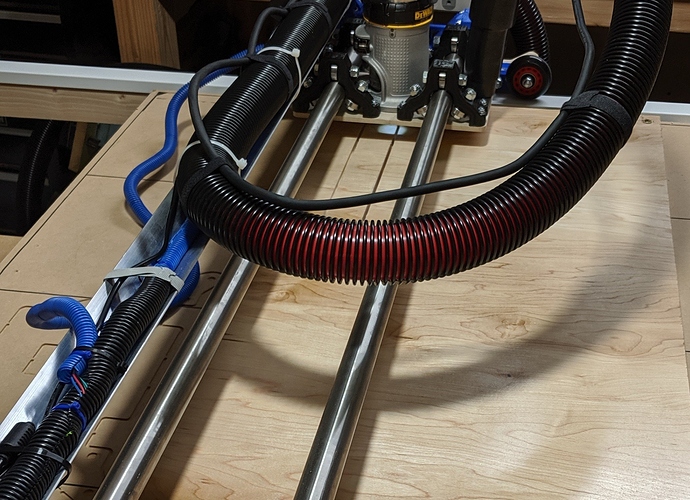 Are you Z steppers wired in series or parallel? Single driver or dual driver for Z? What is your current limit for the drivers?

Z motors should be able to hold that weight, but only if you are giving the motors enough juice.

I had some issues with the default firmware max acceleration, feedrate and jerk settings for Z axis. I had to lower them to ensure the Z axis never skips.

My Z is wired in series, plugged into the single Z axis on the mini Rambo (i.e. stock configuration.) Interesting that you lowered default feedrate/accel/jerk, I was hoping not to do that, but might give that a shot if I notice skipping again.

That is how mine is setup as well… the big one to change is probably acceleration.

I believe you can play with the values without updating the firmware by inserting some gcode before you print:

Thanks for the tip. I think I can do it straight from the LCD and save the configuration. I’ll probably lower it a tiny bit just to be safe. I think I saw that video of a lowrider lifting some large weights and just assumed I’d be able to lift anything!

Edit: also noticed that somewhat recently in the firmware notes, the defaults for the Z axis were lowered a bit

Ahh I got my lowrider a year ago so might not apply anymore. Also mine came with the EEPROM save disabled so not sure if it will be save-able for you. Even on 3d printers if you set the accel too high it can start skipping and they hardly have any weight at all.

My max_accel for Z is set to 25 mm/s and max feedrate for Z is 6 mm/s which may be conservative but I just kept turning them down until I stopped getting missed steps when all the weight was on one side. I’ve done lots of cuts since without issues.

Great. I was able to make it “slip” like the OP, during a long Z80 move (not accelerating at that exact second) so I will definitely drop the feedrate as well. I’m not in a huge rush, and pretty excited to have the 1 issue I was having be resolved.

Wanted to update this thread for future searchers, I discovered the Drive Strength setting in Marlin (under Configuration) and bumped up Z to 1200, up from 900. This seems to be able to lift the weight I’ve been putting on it.

Pretty sure someone already mentioned checking that setting but for some reason I was afraid of raising it above 900.

Could someone explain (mini Rambo) how I might determine what the max power setting might be for the Z axis? 1200 works great, just more of a curiosity (will 2000 fry the board?)

I will probably rebuild the firmware with 1200 as default for Z, so I don’t need to remember to change it every time.

With my equipment as is I do leave a lot of power on the table. It is okay to raise the current just keep an eye on temps.

Ah, thanks for the advice and what to watch out for. I’ll keep it just barely up to the point that prevents skipping and leave it at that, and keep an eye on temps so I don’t melt anything. Worst case I can print new parts! ?