I’ve had this happen twice on the same job (a tool holder for my collection of endmills) and hasn’t happened in the same spot. It seems that the Z axis is not coming all the way up before moving to drill the next hole.

It does occur pretty far into the job, so I’m wondering if it’s just the z-axis driver getting warm and deciding it doesn’t want to do any work for a step or two and then kicking back in? What’s interesting is that it does successfully drill the next few holes, so the Z does kick back in and runs smoothly, it’s just a little low in the work piece so leaves some pretty trails in it…

Electronics and vitamins are all from Vicious1, I printed my own parts. EstlCAM for generating G-code, printing from SD card. Usually it happens from moving too fast, or sometimes your z axis is dragging /friction.

All are at defaults based on the ESTLCAM tutorial.

Interestingly I just ran it again, but with a 80mm fan just blowing across the RAMPs board and had a successful cut. So I’m thinking adding some fans to the enclosure and making sure everything is properly lubed up may help here.

I had the same problem. Mine was the driver over heating. I ended up blowing out the driver and had to replace it. I still need to adjust the current because now the stepper motor itself is getting too hot and causing it to occasionally miss a step.

Can also happen if your pineapple coupler isn’t tight enough (or cracked so can’t grab the motor shaft or screw well enough) to lift the z-axis.

(I had the same issue (it was going down more and more as task went on). and found a hairline crack in my coupler when going over my mpcnc.)

Hi Gurft, we had this too - we blew a few holes in the worktop before it became reliable.

Various investigations, over time, showed:
[ul][li]stepper current not high enough (I’ve got rather high current steppers), so it was skipping a little - tuned Pololu more carefully, and added cooling fan;[/li]
[li]Z-axis threaded rod not gripped tightly enough by pineapple coupler - tried superglue, but eventually replaced pineapple with a plain old 5-8mm coupler;[/li]
[li]the Z-axis long nut wasn’t quite on-axis, so it was presenting significant resistance. Oddly, it wasn’t obvious until we fiddled with it and found we could make it all move far more smoothly. This was the real cause of the problem - the points above were band-aids.[/li]
[/ul]

Using a normal coupler led to lots of Z backlash, as we didn’t notice how it was stretching and squeezing under load. We’ve changed the Z-axis to use a T8 lead-screw etc (May’17 update) and fitted the coupler more carefully, as per instructions!

This shows the new lead-screw (and also the old rod, with all its superglue and grease). All seems to work well now. 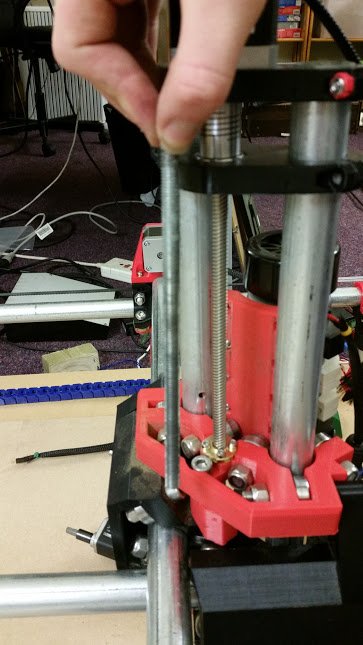