I have a really intermittent problem. First, a couple times, the Z slipped a little (I think) when drawing with a sharpie and ended up higher or lower than it should and either barely touched the board or pressed hard enough to make the pen slip upwards in the holder. So, thinking it might be related to a lack of lithium grease, I took it off and applied the grease. My method of applying was to lay the removed Z axis on its side and spin the motor by clicking manual +10mm 30+ times in Repetier. It would queue up the clicks and I could hold a paper towel with the grease on the spinning shaft. But, the shaft would occasionally reverse directions and spin the other way for several (5-10) seconds. When spinning the wrong way, there was no noticeable difference in the sound of the motor.

As for wiring, The Z wire has been replaced with Cat5e cable with the ends cut up and the twisted pairs spliced into the Z wiring I got from Vicious1. The slipping during draw occurred before and after I extended the wiring.

After applying the lithium, I have not noticed the slipping, but I have not done much testing. Does anyone have a clue why it would have reversed during repeated +10mm commands?

I have not yet used my setup for cutting as I am still tweaking/neatening/etc (such as adding drag chains and a RAMPS case with fan) and learning the software. Once I am comfortable, it will move off my coffee table to the garage to do messy work. 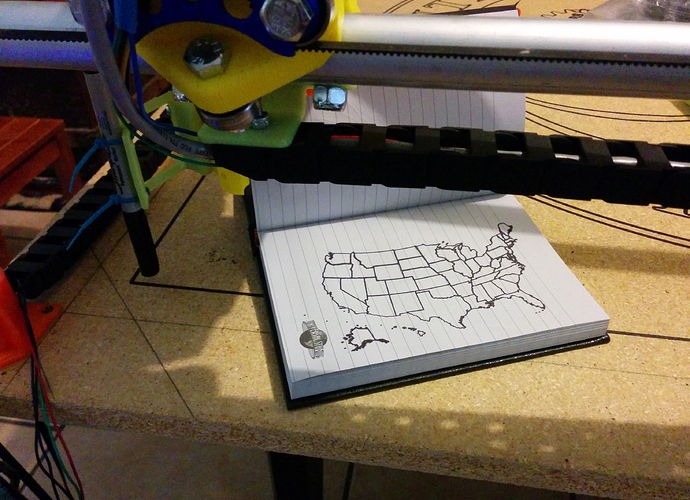 I can not imagine what could cause it too reverse.

Maybe load up the temp firmware I have posted on the Marlin page, it has a slower Z acceleration. That should fix your problems, That and turn your driver up to .7v.

This thread is old but I am having the same issue with the z axis. However, I don’t think it is reversing directions or a problem with the software.

I think that during cutting/plotting when the program tells the tool to raise up (positive z direction) for clearance to move to the next cut line, something is causing the threaded rod (or motor shaft) to get stuck making the motor stall/grind/whine. The pineapple coupler does not rotate when this happens and the threaded rod does not move, keeping the tool at the same height. Then, after moving to new x and y coordinates, it lowers the tool (negative z) to start the new line. But since it didn’t go up (positive z) earlier the tool gets pressed extra hard against the surface of the work piece. This is the ‘reversing’ I think Herman Meyer was referring to. Sometimes when raising before going to the next line it will increase in z some before freezing/grinding.

I have only used a sharpie or pen secured with zip ties at this point so when this mishap occurs the upward force from the table on the pen just pushes the pen higher up on the tool holder, slipping it through the zip ties holding it. If this were to happen while using a router bit held in a firmly mounted router, the force would surely break or bend the bit.

I’ve tried tightening my middle assembly and am going to try lubing the threaded rod as well. It appears straight and feeds through by hand fine.
So what could be causing this?

Also, for reference I have the old corners and rollers, but the new style middle assembly. My frame and middle rails seem pretty square. I haven’t had any other issues yet other than over tightening and cracking the roller locks and one of the feet during assembly, neither of which seem to be affecting performance. The workspace is 480mmx480mm with legs about 8" tall.

Any ideas? I will post a video if I can catch the mishap in action.

After reading this thread: https://www.v1engineering.com/forum/topic/different-problems-on-the-three-axes-including-the-z-buzz-dive/
I believe that voltage is the issue, but I need to get a multimeter to be sure.

My earlier post said that the motor made a grind sound. It is much more of a buzz than grind and IS NOT the same as the deep grind it makes when something restricts the steppers movement. This is part of the reason why I think the voltage may be the issue. I also loosened the anti backlash nut as per the thread linked above. It definitely helped some.

I will update again after changing voltage.