I built the Burly, tore it down and upgraded to Primo. I built the MP3DP, and it serves me well. I should probably build a Lowrider to cut the top out of this, but I think this is just going to be my beta table. Plus I already have the conduit from the Burly. 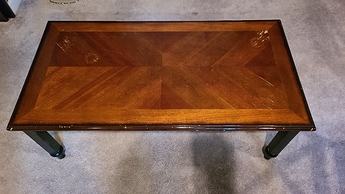 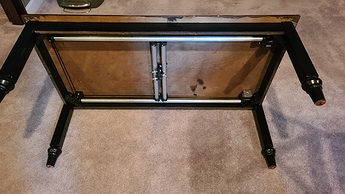 Didn’t even have to cut the long tubes down😁

So I’m still convinced that CoreXY is some sort of arcane sorcery but after getting the belt attached, it seems to move correctly.

Next I’ll mark out the top, remove the mech, and cut it out.

This one might take a while as I have waaaay to many projects going on currently.

I notice you’ve got the motors rotated 90 degrees. Does the mechanism work smoothly that way? Any problems when the X axis gets close to the motors?

They seem to move fine.

I was just going by the docs and Old Guy Coding’s belt threading video. As far as I know, that’s how they are supposed to be mounted. I was a little confused too before I started the build while watching the video because I noticed the belts had to twist 90° to feed through the center idlers. I haven’t hooked up the electronics to it yet so I guess I’ll find out then, but there doesn’t seem to be any more resistance as it approaches the limit switches.

Yeah. That’s the ZenXY design. You have them the right way.

I assumed this was an intentional design decision by @vicious1 to minimized the vertical dimension of the ZenXY mechanism.

Looking at the above picture, the whole mechanism tucks up inside the table apron, but if the steppers were rotated 90* to remove the belt twist the steppers would probably be visible below the apron.

Pulled my CNC shield from the Primo to test with another Uno I have laying around. Running GRBL and sending with UGS. Made a pattern with Sandify and ran it. Moves correctly. Gotta get the limit switches wired. Work area ends up being X=290 Y=800 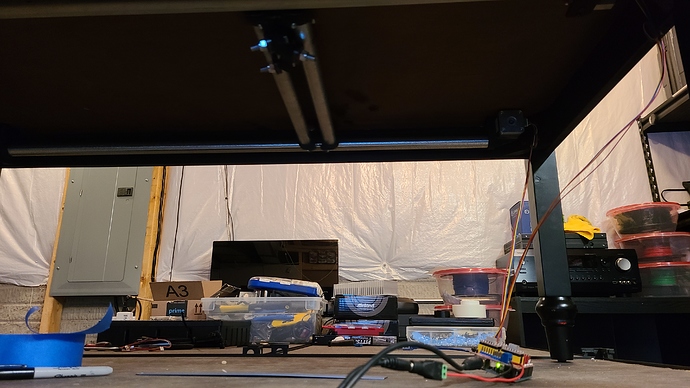 Are there any SDcard/LCDs that work with GRBL if I want to cheap out? Or should I just spend the $10 extra bucks and get a RAMPS seeing as though I also have a spare Mega2560?

There are some new tft displays that work with grbl.

Fun with Lightburn, lasers, and dithered images Things You've Made

I finally got the Makerbase MKS DLC + TFT24 combo I ordered from Aliexpress… took about a month. [20200626_144804] [20200626_175232] I downloaded the GRBL v1.1h hex file and the TFT24 Laser/CNC mode firmware and was able to install them successfully. The TFT firmware is set up already but is the 3d printer version… hence the need to install the CNC version. I have yet to figure out why they only package TWO driver modules with it… it is, after all, a 3-axis controller board. I considered i…

That would be a neat solution for the zen.

I went ahead and ordered the WiFi module for that TFT also, so we’ll see how that works. 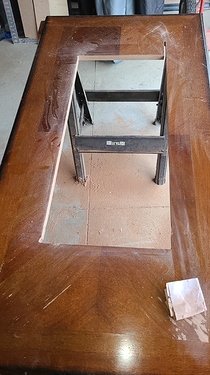 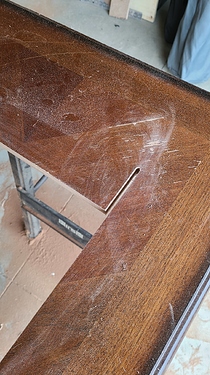 Hmmm. Maybe make it a feature? Make an insert out of a different wood to cover it? Maybe fill it with resin? Maybe just fill it and paint the whole table?

Still getting the hang of this.

Maybe just fill it and paint the whole table?

Oh yeah, that goes without saying.

OK, got the bottom panel mounted and put some test soda down. Realized that I cut the opening smaller then I wanted so now I either have to shorten the Y tubes for the end-stops to operate, or finish cutting the top hole bigger. I put the routing fence on the cut line instead of the fence line. Good thing is if I re-cut the top, I won’t have that little filled tail any more. Maybe it’s a sign?

The ball isn’t regulation. I don’t even know where it came from, maybe an old mouse? It just happened to be in my random screw bin. 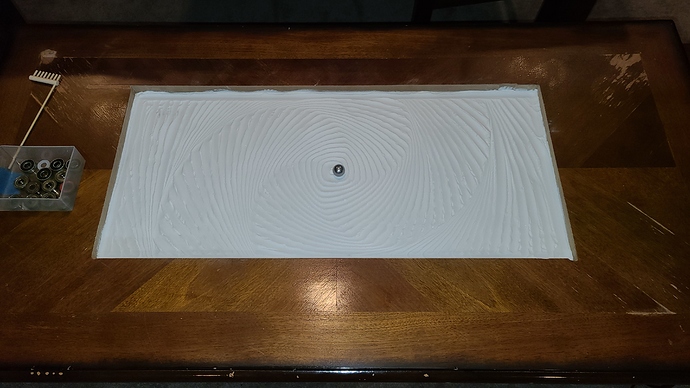 Man the movements on this thing is LOUD. I’m using DRV8825s at about 3500mm/min but there is a lot of rattle from non-seated bearings. Is there any adjustment for the center bearings seating? I did remember reading something @jeffeb3 did with wrapping the tubes with heat shrink. Any other ideas?

Edit: Found the thread I read about the heat-shrink. Also turned down the feed to 2000mm/min and that made a huge difference.

Yeah, I wrapped my tubes with 1" shrink wrap. But only the outside ones. I just redrew some parts to try to fit the middle pieces with wrap.

Just got back from Depot Del Casa. Bought a few metal balls from 3/8" up to 5/8". I measured the one I had and it is 19mm~3/4". I figured I could try out different ones and maybe get some tighter patterns. At less then a dollar to somewhere around a buck and a half, I said hell with it. 1/4" seemed too small though so I passed on that. 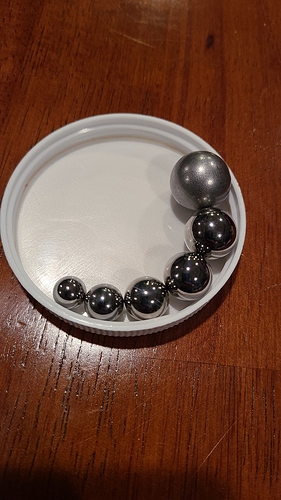