I came to this forum hellbent and determined to build a Lowrider v2 and I am still planning on it, one day. However I have become smitten with the ZenXY and think it may be a better project to cut my teeth on.

I fancy myself as technically minded and a quick study but to be honest I am a neophyte in this space. I am starting from scratch, I don’t have a bucket of parts from past projects, nor experience from building a CNC or even modding a 3d printer. No matter how many forum posts I read, how long I study subreddits and how many readme’s I look at on GitHub I am completely lost. My anxiety/fear of “doing something wrong” is through the roof so I thought I would reach out to you fine folks for help.

I found a post here with a modern box shaped coffee or end table sized ZenXY and that seems reasonable and fairly easy to build. I have also thought of sort of a contained tabletop version I can place on a buffet or end table. If I get really confident in my craftsmanship I may try to cut a hole in my existing dining table and drop the box into the void… Not sure the wife will approve that route. I want the features of Sandypi (wireless access and continuously changing patterns) and would like some automation of the LEDs. Although I could just handle those separately using something like HomeBridge (another thing I have no experience in).

I have a ender 3 so I will print the parts I can and I plan to buy everything but the control board from Ryan. I have 0 confidence in Amazon/Aliexpress/Banggood components because I just dont know what I am looking at 90% of the time.

It seems like the control boards offered here are a bit of an overkill for the ZenXY.

That leads me to my questions:

Thanks in advance, this community is awesome!

That being said, I found the use of a CNC router to be extremely handy when building the actual table. Mine is built into an Ikea LACK table, which is inexpensive, and if I’d ruined it… Oh well.

The parts are reasonably simple to print, and I believe that you’ll be very impressed by the engineering that went into it. It will certainly bolster your confidence in the other projects from V1.

SO… Yes. I think it’s a good beginner project. It can be quite inexpensive, and loads of fun.

For a control board, Bart Dring’s plotter controller has been getting excellent reviews, though I don’t have one myself. The reviews, however have been good enough that I’m planning on getting one. Apparently it can also control the LEDs, though an ESP32 board running WLED seems to be the controller of choice for that. Of course for Sandypi, you’ll want a Raspberry Pi. I think that a 4 is overkill, and a 3B is perfectly adequate to the task, but a little extra capacity never hurt.

I’m using a basic Arduino Mega 2560 and RAMPS 1.4 shield with a pair of DRV8825 drivers, because I had them lying around doing nothing else. I have a Raspberry Pi connected to mine as well for wifi access.

Thanks for the info! I have been looking at Bart’s Tindie store for a bit as it has been mentioned several times on here. The 6 pack looks awesome but I honestly have no idea what half of the features he talks about do or would be used for

I was curious because he has 2 plotter boards but the stepper drivers are different. Are both fine (ie I can buy the cheaper one) or does the TMC2209 have some advantage over the 2130?

I have the Bart Dring 2 channel plotter board with the 2209s. Love it so far. The grbl learning curve was very manageable, and I even got excellent support on the discord server for the project.

I have no idea if the zenxy is easy or hard but I can tell you if you are willing to do the work the people on this forum will help you. I believe that you can build it. research is the key

Whelp I bit the bullet and purchased the kit, motors, belts and Bart’s controller. Wish me luck!

I have a question on the LEDs for anyone with experience: will the power supply that I bought from Ryan here be sufficient for a set of addressable LEDs? Also will I need a separate control board for the LEDs or will the one I picked up do double duty?

There is no set formula for the LEDs, but I installed a second ESP32 and I run WLED on it. There is a lot of info about setting up addressable LEDs, but to make everything simpler, I would try to keep them as separate as possible.

Luckily, you can also limit the current in the WLED settings. Half the brightness is easy to get rid of, because you won’t be doing all white most of the time. So if you wanted to take it easy, 4.5A or even 3A for 150 RGB LEDs is fine.

This is the reason the less dense LEDs are more popular. They take a lot less current.

Maybe that will be a project I bite into later. I have a simple HomeKit enabled strip I could add to the box instead and save myself the headache. I will save addressable LEDs for my Christmas display

They are really fun to play with. WLED makes it so much easier. It is definitely worth buying some parts to prototype with and then either reuse them, or order some more once you know what you are doing.

10/10, can confirm. Do the addressable LEDs with wLED. You won’t regret it! 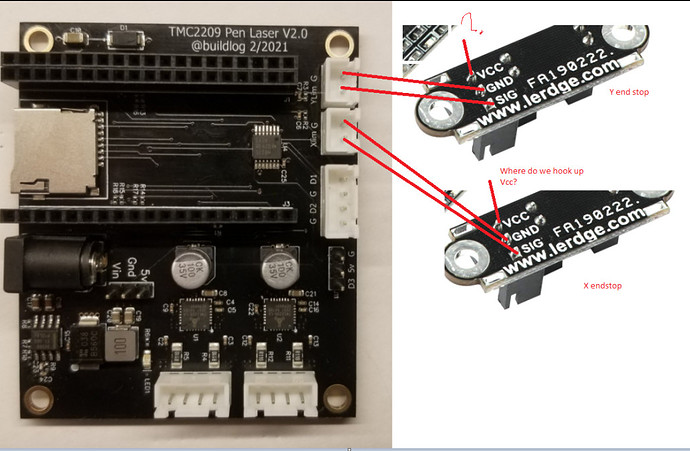 what is the best pin to hook up the VCC to on the board.

I am using the endstops from the V1 shop https://shop.v1engineering.com/collections/zenxy/products/optical-endstop.
VCC: 2.7V to 5V

(the picture i picked up from the internet for illustration only)

I just use the two pins labeled 5V on the board.

This is what I did. Worked like a charm.

I looked at the BOM for Bart’s board, and the step down converter which supplies 5V has a pretty strong current rating. (I wanna say 3A, dont quote me, I am NOT an EE). I am actually using the 5v to power the optical stops AND the ESP8266 that controls my lights.

YMMV, but for me its been solid.

Thanks Guys… I will try that.

Hope this is what you are talking about 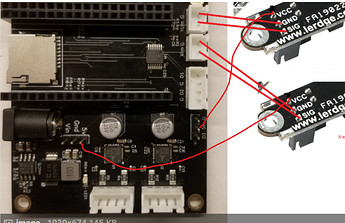 Bingo, you got it.

A couple things to consider:

If you got them from me they are 5V tolerant and I also had special wires made that can be separated instead of the standard 3 plug.