Anybody used a Raspberry Pi 4 4GB/8GB as desktop?

I’ve just put Ubuntu 20 desktop on my Raspberry Pi 4 2GB for a giggle. I was interested to see how it worked as I don’t actually have a Linux desktop available natively. All my Ubuntu Linux boxes are:

Installation as normal for Ubuntu and Raspberry Pi was dead easy. I threw it all on a decent 32GB sim card. put a micro USB to HDMI cablle on it and a proper 2A PSU and it powered up straight away.

However 2GB might be enough for a server, but the desktop performance isn’t snappy.

Has anybody got any experience on whether it’s worth getting a 4GB or an 8GB pi for desktop usage? Would it be snappier? Looking at the system stats, it’s already swapping and that’s to an SD card (gulp). I could put a cheap SSD on the USB3 port and see if that improves things. I happen to have a 1TB SSD which is supposed to be going in my Mac when I get around to it, seems overkill but might be worth trying out for a day or two.

I’ll use the Pi for some Linux based UI development but really mostly for testing to see if Electron works as expected.

To be fair, it does work, it installed and recognised a UK keyboard, it also recognised by 1920x1200 DELL monitor with zero issues, older versions of PI software hated the fact it was 1200 high for some reason.

Any information welcomed, might just have a try for a few hours to see how it goes and can I improve things.

I’m on the PI now, (correction, I started this on the Pi and the UI froze on me, so have moved back to my Mac).

I have got Lastpass working with Firefox and I thought I’d try it out. The typing is fast on Firefox and it seems fine. Window operations are slow though. However it’s currently frozen and I appear to have run out of the generous (!) 1GB of swap allocated. Not sure why I only got a 1GB swap, but it’s been a long time since I tried to run a PI with a graphics UI.

I’ll keep looking at it, but it’s not looking hopeful. 4GB or 8GB should be significantly(?) faster but I don’t fancy spending £60 for yet another toy.

Check out explainingcomputers.com
Christopher has done several videos about the performance improvements, in the Pi, as the memory increases.

Short answer: It seems that the 8GB board is very nice as a desktop.

Thanks am looking at it now. The 8GB is ‘only’ £60 or so and if it does work well, it does need to run Electron and JavaScript well.

I don’t need any extra bits, just the board.

Ubuntu in 2GB is simply not workable. Raspberry PI OS might be an easier load for it. Everything is taking too long to do. Will add the SSD just for a laugh to see if thats the issue.

I have a 4GB on my desk. I don’t use it often, since I have my work laptop there. But I am running raspbian from a USB3 drive. It can drive my huge monitor and run firefox fine. It won’t win any awards, but it is useable.

I use Linux as a desktop for everything, but I heavily modify it. I use i3wm, and mostly I use a terminal and the web browser and that is it. I cam get most things done with just those two tools.

I don’t see much point in doing that, you could get a used laptop for almost nothing, run linux on it if you like and get way more power as well as many other benefits you can’t get with a Pi (integrated screen, better stability, a battery, etc).

IMO i only worth it if you have a spare RPi you don’t know what to do with, or if you need something very easy to carry around.

As I said in my very first post, I had a spare pi 4 laying around and it was for a giggle. I was interested in whether a pi 4 was usable for a desktop. I have a few of them acting as octoprint servers, ups monitors, time lapse video recorders. However all of these are CLI and I simply ssh into them.

I wondered if Ubuntu with a GUI would be fast enough on it and for the cost of about an hour of time, it’s clear to me that 2gb is not enough to run Ubuntu desktop.

I’m still not sure if pi 4 with 8gb is a usable option but it’s still an interesting option.

A laptop is still bigger than a pi 4 though, I don’t happen to have a spare laptop lying around, nor a spare desktop. I know I can get Linux working on either but the aim of the experiment was whether a pi 4 with 2gb was usable with Ubuntu. In my opinion it’s not with a GUI, but it’s fine as a command line server as is the Pi3 with 1gb.

I wanted a dedicated Linux desktop that wasn’t virtualised to test out some GUI development I’m doing, this was a quick way to see if the spare pi was fast enough. It’s not enough with 2gb. I didn’t know that before, I suspected it was too low. I now know it is.

I still might see if I can strip the GUI right back. I used to run a Sun 4 which had 16MB of RAM and a 217MB disk. That ran well with a large monitor but every component was slower than the pi 4. However Sun BSD was designed for its time and virtually nobody had 1gb of ram, even our main production servers which cost a £100k+

It’s always interesting to see how far you can push things and knowing something is more valuable than suspecting something.

As I said in my very first post, I had a spare pi 4 laying around and it was for a giggle.

You also said that it didn’t have enough memory and that you wanted to purchase one with more ram specifically for that purpose.

A laptop is still bigger than a pi 4 though, I don’t happen to have a spare laptop lying around, nor a spare desktop.

Yeah, but nowadays you can find some used ones for vitrually free, many people and companies have old laptops or desktop they don’t use anymore.
Anyway, that was just a thought.

Looking at the one I’ve been working on for the past couple weeks, sloooooooooow!

More portable than a laptop though. I wouldn’t use one as a desktop replacement unless all you use is a browser with one or two tabs open.

I don’t see much point in doing that, you could get a used laptop for almost nothing,

True. But getting a used laptop has risk (something might be damaged) and takes special focus (deciding which one). The pi4 is not expensive, it is consistent (amazon will bring it here in 1-2 days) and it just takes an sd card swap to change the whole OS.

Buying a used laptop is a good choice. There are certainly enough of them around and it keeps them out of the landfill.

I am using one on my desk so if my laptop is out around the house somewhere, I can still use a computer at my desk. It isn’t really needed. I would not want to have another whole laptop for that purpose.

I’d love to see a how the new rPi 4 compute module works with an NVMe-disk, for a desktop environment!

Depends on what you mean by getting… I got 5 spare laptops from work, for free, and had no choice in what they where but I bet they all run better then a pi4 lol

eBay doesn’t seem to have any cheap laptops. My current employer is UK govt and I can state freely that I have no chance of a cheap laptop there.

Great if people have the opportunity, but in <cough> too many years working in IT, and I can remember when C++ was just a massive preprocessor, Minix was the hobbyests UNIX and had 64KB (yes that is not a typo), when 8 bit processors such as the Z80, 6502 and the 6809 (I wrote code for all of them for work), but I have never been offered a cheap laptop or bit of computer kit from work. I envy those people who do.

Anyway, we are going off topic. I am well aware of the advantages of a laptop over a PI. The intention of this thread was to ask if anybody had experience of using a Raspberry PI 4/8gb as a desktop. I have shown to my own satisfaction that a 2GB PI4 running Ubuntu 20 is slower than a snail going uphill in treacle whilst pulling a railway car. I have not spent any time tuning it, or more likely throwing away the default window manager and running a lightweight one. I wonder if a 4GB or 8GB is similar to the 2GB and Ubuntu is simply too heavy for it.

The other option is Raspberry PI OS and see if all the modules I want are there. I’ve spent too many years of my life compiling stuff and I have no interest into descending into the version hell of cutting edge software, so it eiiher works or I move on.

Raspian (raspberry pi os) has a lot of packages. There may not be the exact thing you want, but there will be something. Ffmpeg isn’t available, last time I checked. But vlc was. 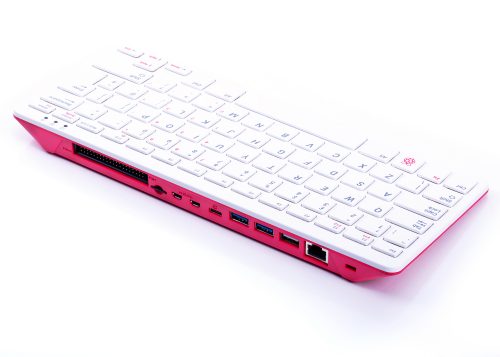 Raspberry Pi 400 is your complete personal computer, built into a compact keyboard. It's our most powerful and easy-to-use computer yet.

Not a great for factor for a v1pi. But I am tempted to order one for my kids or something.

Seen it a few times today. Nice and not a lot more than a 4GB Pi.

Oddly enough, I’m just setting up node, angular and electron.js on a Ubuntu client VMWare Fusion session as I gave up on the Pi 4. 2GB is just too small. It’s been years since I actually used a GUI on Linux as all my Linux boxes are command line.

I have an 8gb model with Ubuntu on it. It’s still a bit slow running off of an sd, but if you have a spare ssd and a sata to usb3 cable it should be much snappier. Also if you move to raspberry pi OS (formerly noobs) it’s much snappier. An ice tower cooler and over clocking to above 2 would dramatically improve the experience as well.

Edit: you should also look into pinebook pro or alternatively if you already have the raspberry pi, the check out the “pibook pro.” It’s a laptop form factor that runs off of your raspberry pi and it’s only $68 with a discount code!
The shells came from a failed Kickstarter company so the laptops are just a screen and a keyboard and battery for a laptop. Gives you portability and the pi 4 is more powerful than chromebook also.

https://pibookpro.com/ and use code NOVASPIRIT Credit to the YouTube channel for that code. $68 + 10s&h. You can check out novaspirits channel for a review of these also

What would you think of an nvme on such a setup?