I thought I’d put up a photo of our MPCNC build and some photos of the first project I created. We purchased the printed parts and vitamin pack from Ryan to build a MPCNC for our Archaeological Studies program. Of original intent in building the MPCNC was to have a 3D printer capable of printing 1:1 scale reproductions of skeletal parts from early hominid skeletons for use in classroom teaching. But we were also drawn to the MPCNC because of the multi-functional abilities where we could use it for developing and teaching students skills associated with exhibit mount making, etc.

To start, we built the standard build size using the imperial sized parts (planning to increase Z axis later to accommodate taller prints). After some minors bumps in the road (e.g. USPS half destroying the first shipment of materials, over tightening some parts during the first build, and having our Ramps board burn out), we have been able to get our build successfully up and running. We still need to “pretty” it up with some cable management, enclosures for the lcd and arduino/ramps, and an emergency stop button.

I want to give special praise to Ryan for providing the absolute BEST customer service I have ever experienced. When the package arrived from USPS damaged with several parts lost in transit, he responded literally in minutes and was already firing up his printers to print out replacements to get them in the mail the same day!! I can honestly say that I have never received such great customer service!!

So having gotten over our road bumps, we are having fun learning the ins and outs of CNC work since none of us have ever used one. As a testament to Ryan’s great machine, even with no CNC experience, we are getting good and very accurate results. After running through some plotting with a pen to test things out, I was anxious to get cutting! Using a line drawing from an old publication (early 1900s) and AutoCAD I created a dxf file of a wooden jar tag from a tomb of Egypt’s fourth king of the First Dynasty, King Den. His tomb is located at the site of Abydos in upper Egypt and dates to circa. 2950 B.C. The original item is a tag made of ebony that is carved with shallow hieroglyphs. The original is in the British Museum (http://www.britishmuseum.org/research/collection_online/collection_object_details.aspx?objectId=116751&partId=1). I used Estlcam to create the gcode as two separate files; one of just the hieroglyphs and one of just the outline and the hole with goes all the way through it. I used a piece of 4.7 mm thick bass wood since it was very close in thickness to the original (only about 1mm off). Before carving, I used some brown acrylic pant and rubbed it on like a stain to add contrast to the end product. The hieroglyphs were carved 0.5 mm deep using a 0.1 mm v-shaped engraving bit with a 20-degree angle and took approximately 30 minutes to carve. In the hieroglyph file I included gcode to drill a 1.5 mm deep hole at the 0,0 point to allow me to realign the tool after changing to a 1.6 mm burr bit to cut out the tag along it outside edge. The outline was cut in three passes in less than 1 minute and used several tabs of half material thickness to keep it attached until done. I am extremely happy with the results. They are so good, I can now use this piece in my classes on Egyptian Archaeology to give students a “hands on” experience with some of Egypt’s earliest written texts.

My next steps are to order some actual ebony and reproduce it in the original material. I’m also going to be attempting some reproductions of Egypt’s earliest inscribed objects which are carved in bone and ivory. Just waiting for my order of camel bone and imitation ivory to arrive from Ebay.

I’ve included a picture of our build, the repro tag produced with the MPCNC and a photo of the original in the British Museum. Not perfect, but pretty darn close! 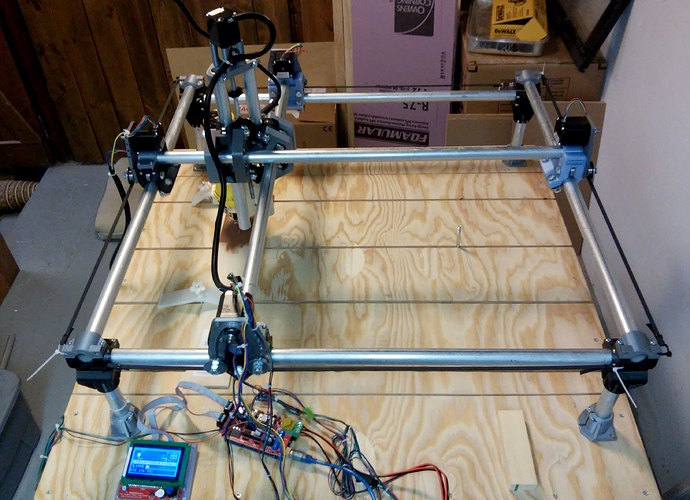 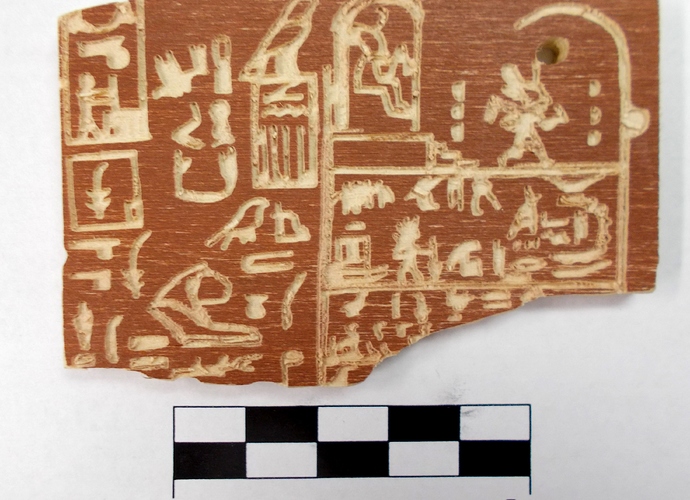 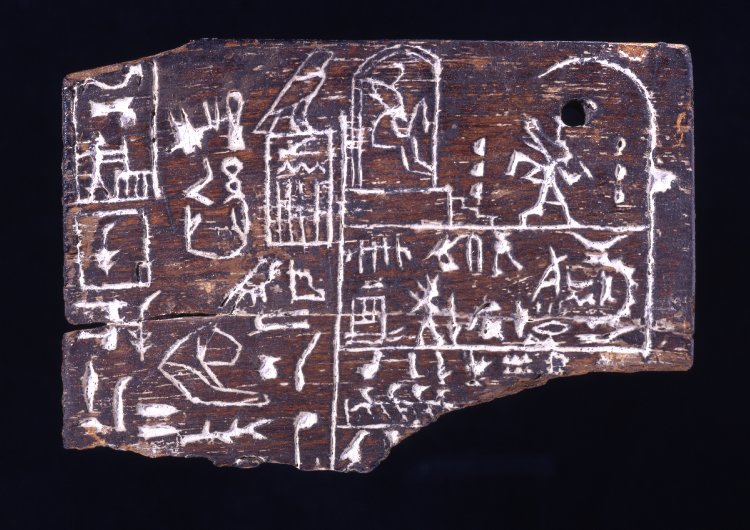 Your welcome. Thank you for all the kind words! Your build looks great and you seem to have a great understanding of the machine already.

After my firefighter and fighter pilot stages of life, for the longest time I wanted to be an archeologist, when then I made the turn to engineering later in life. So it’s pretty cool to see my invention used for your work!

Thanks for making my day.

This is really cool. Would you share the dxf file? I would like to make one of these, especially if I can memorize the, “[reproduction of a] wooden jar tag from a tomb of Egypt’s fourth king of the First Dynasty, King Den. His tomb is located at the site of Abydos in upper Egypt and dates to circa. 2950 B.C.”. You know, just to impress people who are checking out my MPCNC.

Another project using our MPCNC. Not quite as successful.

Attempting to carve a small scale replica of the face from an Egyptian coffin (https://skfb.ly/ICXY) in cheap pine. Used a 3.7 mm ball nose end mill, 1 mm DOC, 15mm/sec feed rate and 20% step over for roughing passes.

Things were going very well as can be seen in photo. About 60% into the roughing, the MPCNC plunged into the material about 8mm as can be seen in the lower left. Guess I’m going to have to take apart the Z assembly and take off the backlash nut as recommended in other posts 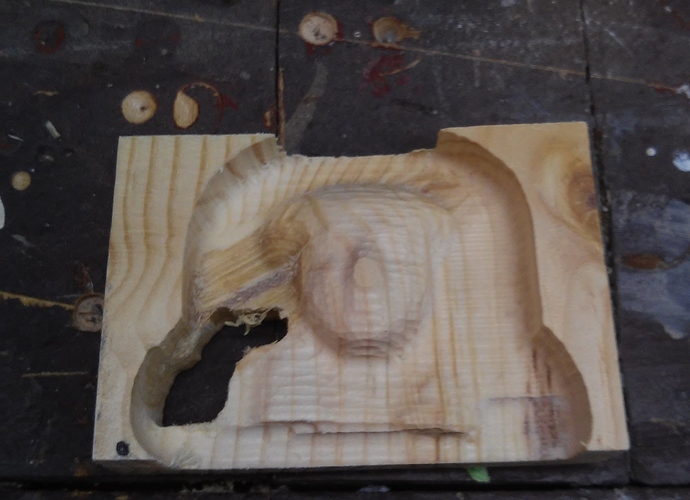 The backlash nut probably didn’t cause that. There are two problems I’ve had with my 2 nut lock.

One was that I had the BL nut on too tight, and that caused the Z motor to skip steps, or the driver for that motor to fail completely.

Another person here (was it Barry?) added some tape around the coupler nut to make it a bit thicker, in case you already printed the 11mm one, or you don’t want to replace the nut lock.

Nope, wasn’t me with the tape. I used/still use a standard nut. The coupler nut I got was way too big.