You might want to link exactly what you have I am pretty sure you can not plug those into each other. I don’t think the power supply will work either, the adjustable ones usually can’t carry many amps.

I wouldn’t be certain the 0-100V power supply will be at 40V max if you turn down the speed. You said it’s not PWM, but I don’t know. If it’s switching between 0 and 100V, being on 40% of the time, your multimeter would show 40V DC, but you’d still be pushing 100V when it’s on. If there’s an RC circuit to smooth it out, then you would see something flat on an oscilloscope, but it would get less flat under load, and might still be spiking higher than 48V.

I also don’t know what you mean by PWM controller. This is a passive device, like a triac? Are you sure it will work on a DC supply?

The pwm speed control was purchased about a year ago. It has an input of 0-40 vdc. I use one like it with an 18v laptop supply to run the power feed on my X2 mill. It’s meant to provide pwm speed control for brushed motors.I thought I had ordered the 48vdc power supply like the one in another post here about a Chinese spindle.

On Banggood site (source of spindle, pwm controller, and 0-100 supply) someone questioned if the supply was pwm controlled, Banggood relied no.

I do know that you can run a motor at higher than stated voltage using pwm without harm. 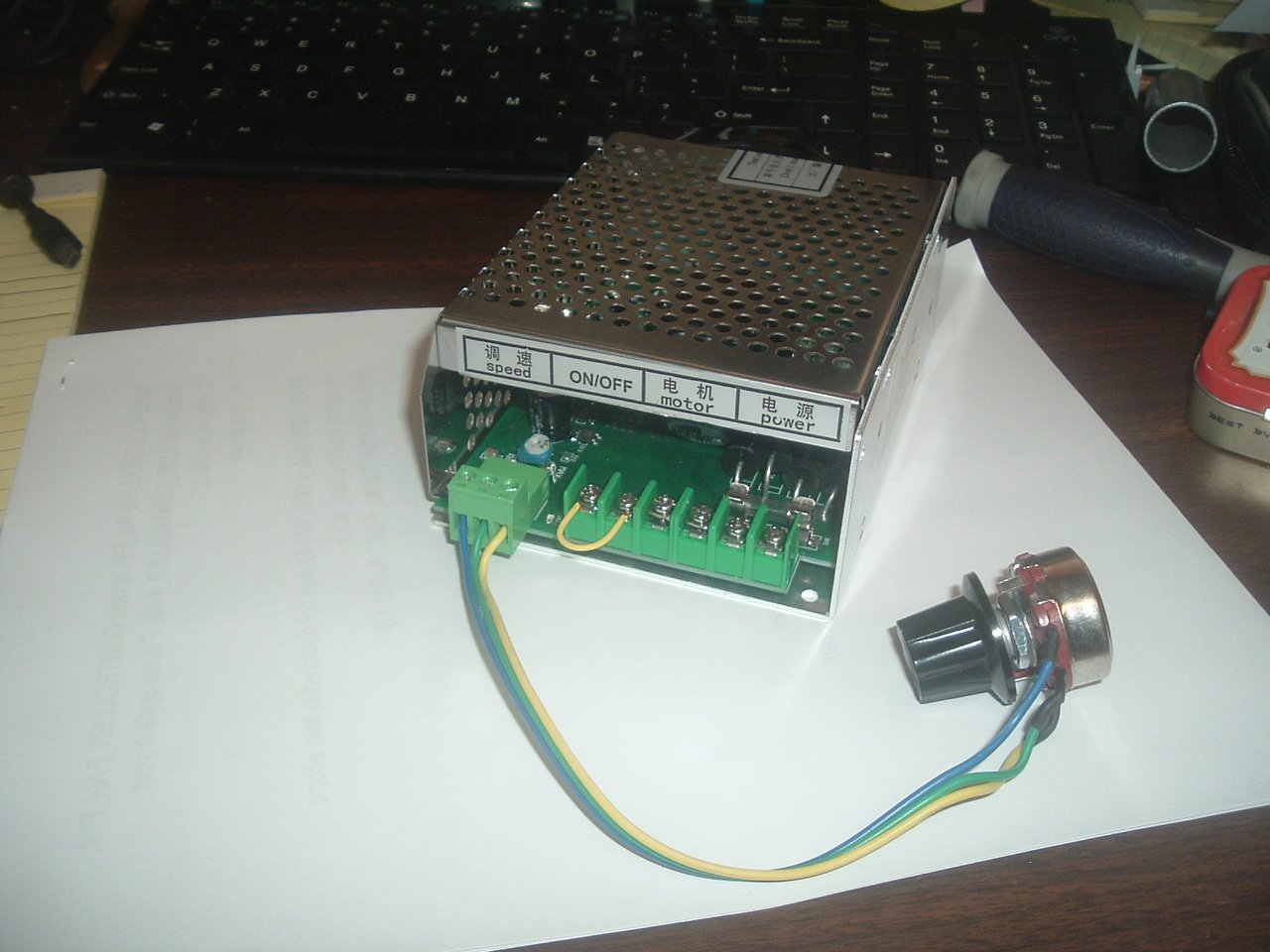 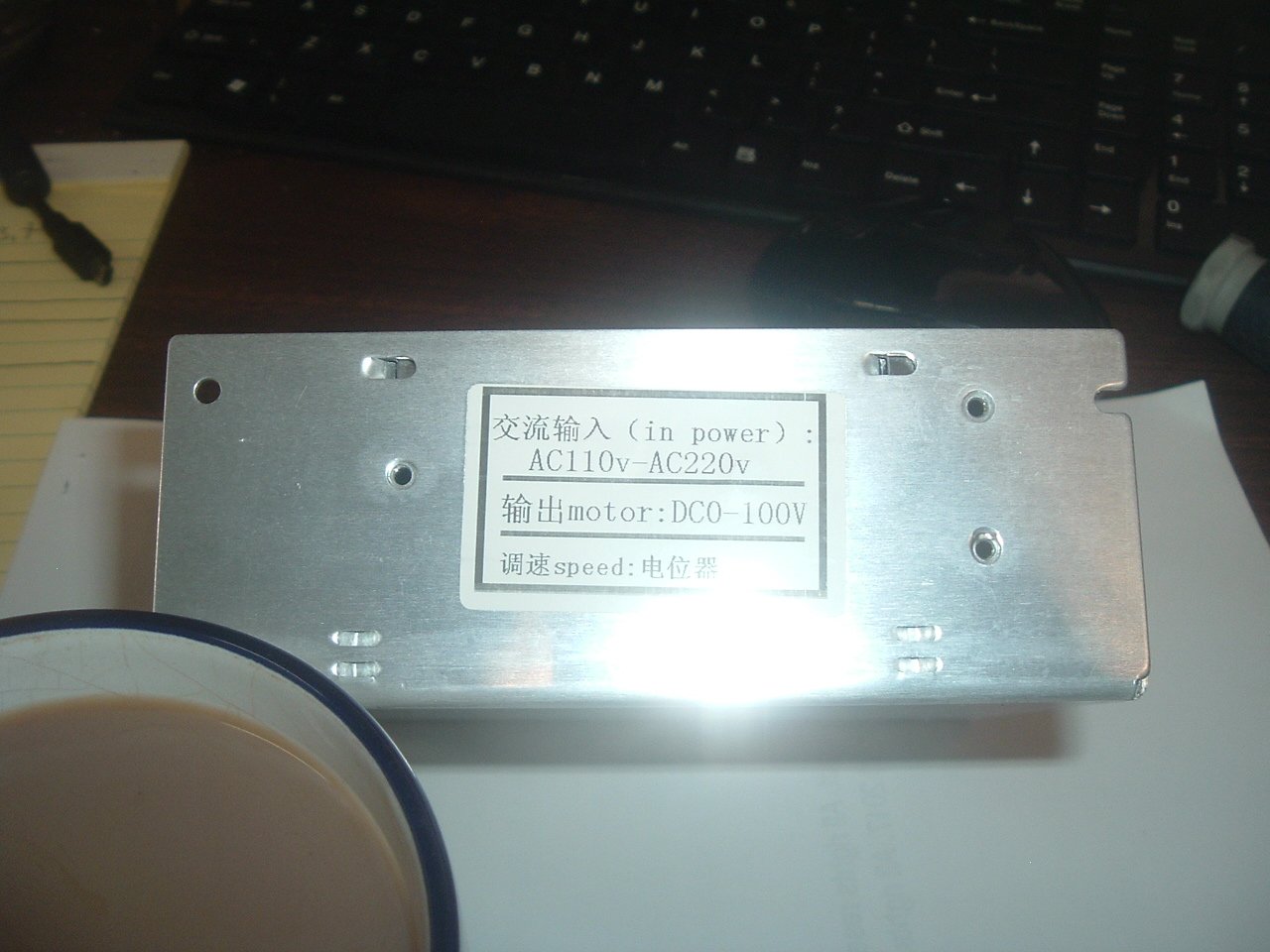 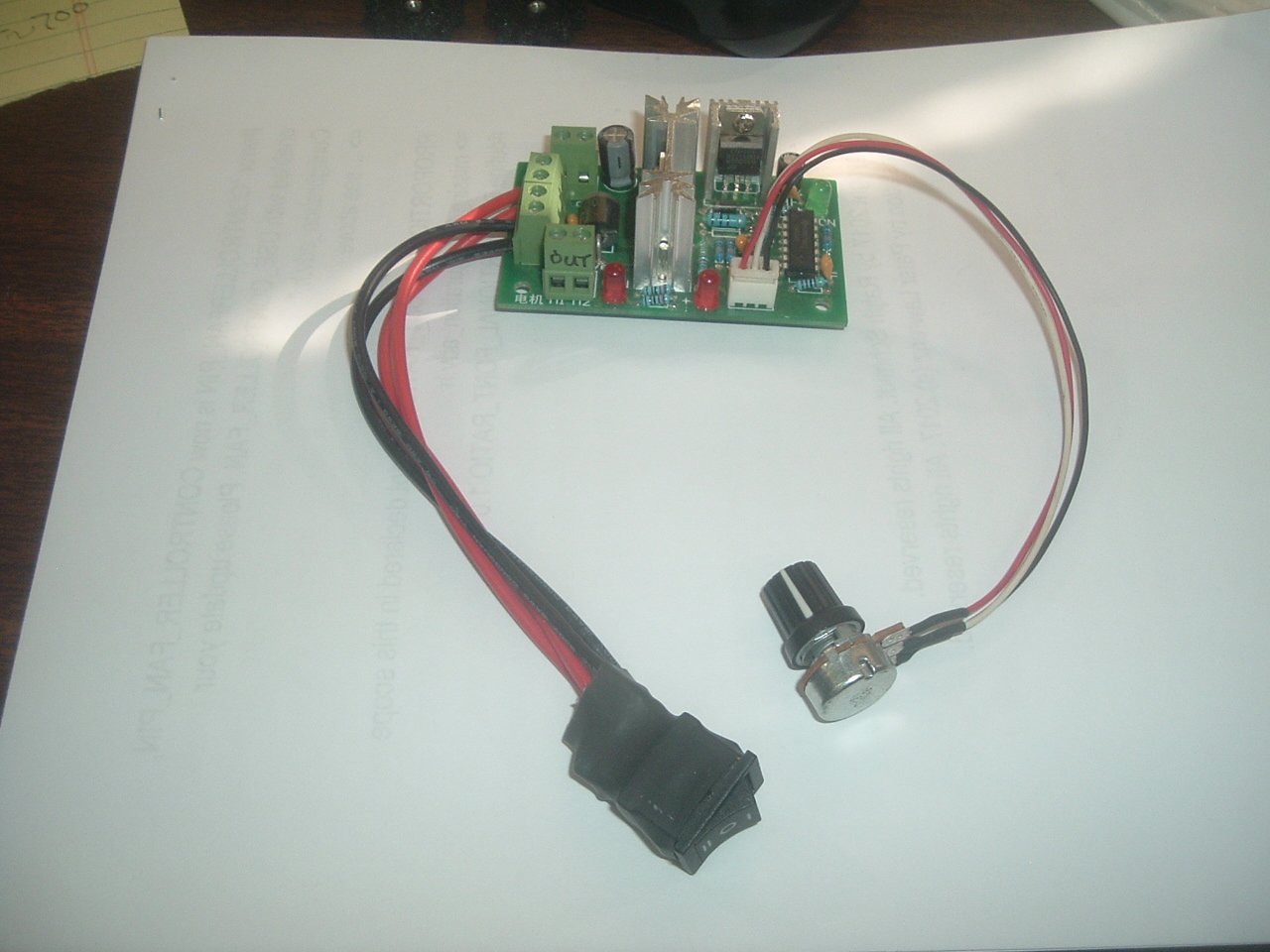 Ah, I see. I was thinking that somehow the signal coming out wasn’t a PWM signal, which confused me. You aren’t sure if the potentiometer on the power supply can be replaced with a PWM signal to control the speed. I don’t know if I would trust the bangood seller to know what you’re talking about either. I would bet that the potentiometer on the PSU would be fine if the signal was replaced with a PWM, but there’s more to that, such as finding the correct voltage.

Is the PWM controller going to survive limiting the power by that much? It looks kind of small. Do you know if it can handle 100V input when the PSU is in the high part of its duty cycle?

I’m going to guess this won’t work though, because if you set the PSU potentiometer to be 40%, the output is going to be a PWM signal, skipping between 100V and 0V, with 100V 40% of the time. The PWM controller will be doing the same thing, you’ll set it to 50% to get 50% power, and it will pass through the voltage 50% of the time, and clamp it to ground the other 50% of the time. The output would be 100V if both were on, and 0V if either were off. If the frequencies weren’t dramatically different, they would either completely overlap or completely miss, and probably switch between the two, so you’d get beat frequencies switching between off and 40V. Maybe I’m being pessimistic, and there’s some RC filtering, which will make these waves no big deal…

I don’t see any way this will destroy itself though, assuming you’re right when you say that 100V won’t hurt the motor momentarily.

I think you should test it. Start with the PSU at a very low value (confirmed with a multimeter) and hook it up the PWM and see if that output seems reasonable and stable (and those keep their smoke inside). At this point, you are only endangering the parts that you’d want to replace if something went wrong.

Then I’d hook up the motor, again, staying close to the bottom range of power until I was satisfied, and convinced that I needed more power, then I’d raise it up a little. Also keep in mind that the output of the PSU with no load might be completely different than with a load, luckily, it will probably be smaller, not larger with the motor.

If you have access to an oscilliscope, it would be interesting to see the output after the PSU and after the PWM controller, both with and without the motor attached.

Once you get it working, you might also think about replacing the potentiometer on the PSU with a resistor to avoid accidentally tapping that knob, which will mess up your set points, and possibly trash your motor or PWM controller.

Well here’s an update. I can’t find any info on the 0-100vdc power supply I have. I even asked Banggood for a datasheet, schematic, or hookup info. They responded by giving me a $16 refund… So much for their technical prowess…

I have searched for a 0-48vdc power supply and found several for $49-$99 dollars, and all of them add exorbitant shipping fees.

So, I pulled out my trusty multimeter, power strip, and sacrificed a computer power cord, hooked up power and turned it on. The supply does indeed put out 0-100vdc. I turned down the 'max pot and lowered the max output to 80vdc.

Next I powered down and connected my spindle. I tested the speed control. The spindle ran smoothly through the range(no load). I’m not sure I want to run the spindle at full voltage, but at least I can run it. Meanwhile, I’ll keep looking for a better power supply.

I have assembled the frame and will soon begin the wiring. I really need to build a work table for it so I can align the frame. My little shop is getting crowded, and there is nothing I really want to give up to make space! I have a lathe, mill, toolboxes, and a large screen TV in an 8’ x 18’ space. Guess the tv will have to go… Plan on getting a newer, smaller smart tv for the shop at tax time… Maybe I’ll wall mount the tv to get it out of the way.

I plan to run the MPCNC as a plotter to start, so the spindle and power supply will go on the shelf for a while anyway.

Can anyone recommend a pen holder for a fine point to ultra fine point sharpie that has a bit of spring to it?

Interesting. Can you scope the voltage of the middle pin on the potentiometer while turning it from low to middle? If it’s close to 0-5V, you might be able to put that on the PWM output of the arduino and have 0-50V output with only a 0-5V PWM (many of those Chinese PSUs are 0-10V for that control wire). In case that’s not clear, here’s the verbose version of what I’m saying:

If you get 5V at 3) and 0V at 5), then you can probably attach one of the arduino output pins to green, and connect the grounds and control the spindle speed via gcode.

Can anyone recommend a pen holder for a fine point to ultra fine point sharpie that has a bit of spring to it?

Pen holder for the CNC.http://www.thingiverse.com/thing:724999 Flexible pen holder, has some give to it to keep even pressure on your surface. Uses 2 cable ties or similar to hold any size pen, pencil, marker.

I haven’t seen any complaints about this pen holder, and it’s from Ryan, so it’s got to be good.

I don’t have an o’scope, but will test as you said with a multimeter. Right now, it runs the spindle, and I’ll take care not to over speed it. I may play with the previous suggestion of adding resistance to the pot connection to limit the speed.

I am new here, and I am still in the assembly of my system which has been a great project, but I have been researching quiet cut spindle setups for what feels like months. I eventually purchased a kit from Amazon that had the Power supply, spindle, and PWM controller all in one. I received my spindle 2 days ago, but have not had the chance to power it up yet.

Anyway, Amazon also has a ton of 48v power supplies that seam to be on par with what came with my kit for around $25.

Don’t know about the quality, but you may find it as one less thing to have to worry about since you already have the PWM controller. That is why I finally settled on the all included kit instead of assembling my own.

I am new here, and I am still in the assembly of my system which has been a great project, but I have been researching quiet cut spindle setups for what feels like months. I eventually purchased a kit from Amazon that had the Power supply, spindle, and PWM controller all in one. I received my spindle 2 days ago, but have not had the chance to power it up yet. https://www.amazon.com/OrangeA-Spindle-Switching-Supply-Controller/dp/B071Z245JR/ref=sr_1_10?s=hi&srs=12087579011&ie=UTF8&qid=1511288922&sr=1-10 Anyway, Amazon also has a ton of 48v power supplies that seam to be on par with what came with my kit for around $25. https://www.amazon.com/voltage-converter-switch-power-supply/dp/B01985WB2C/ref=sr_1_29?s=hi&ie=UTF8&qid=1511288136&sr=1-29&keywords=48vdc+power+supply Don’t know about the quality, but you may find it as one less thing to have to worry about since you already have the PWM controller. That is why I finally settled on the all included kit instead of assembling my own.

Thanks for posting that link. I think my pwm module will work with this supply. I’ll check it out.