I am starting the process of shopping for conduit.

my plan was to build the cnc to 36x36" but I was looking at different conduit options. If I used a thicker walled conduit I think I can go bigger yes? especially in one direction, I’d love to get 48"x72". It should be easier to keep it ridged if one axis is shorter.

The conduit options as I see them are:

That seems like it will be a huge improvement in rigidity, agreed? is there a reason not to use rmc?

What do you think?

Almost all the rigidity in a pipe is its outer most wall. Too thick and it will sag under its own weight. I spent a lot of time choosing the EMT. If you are concerned you can use supports midway on the outer most rails. 1 support midway increases rigidity by 4x’s (if I remember that class right). the best way to increase rigidity is to use a larger diameter tube…not easy in our case. also careful of surface finish and dimension.

This also depends on what you plan on cutting with it. foam, wood, plastic, metal.

Hmm OK. I wish I could get the imc grade. 3rd the weight of rmc but thicker than emt sounds like it may be a sweet spot, but that’s just a feeling, I could easily be wrong and its still to heavy.

Any suggestions for how to support the rails? I assume it has to be low profile to not get hit by the bearings etc.

My main use would be wood mostly for signs, then plastic, also I have a 2w laser head attached to the USB cnc controller’s spindle on off pins so i plan on messing with that.

I first bought some conduit from Lowe’s and thought that the finish was normally a bit rough for this material so I did not think anything about it. I assembled the rollers and put it on the pipes, and it was a rough ride. I then sand the pipe with a finer grit sand paper to smooth it out a bit, but still was not completely happy with the results.

Today I happened to stop buy Home Depot and pick up another 5’ section of EMT conduit, and wow what a difference in the surface finish. I figured I would share this for others to make sure and shop around for the better finish. See picture below to see the difference. The left one was the one I sanded to make a little smoother, and the right is the one I just picked up that has a nice finish. Huge difference in the way it rolls on the EMT, and the sound of it. This has to make a difference. I am taking the other poorly finished EMT back and going to get mine at Home Depot.

Not Saying that this is true for all stores in your location, but just happened to be that way where I shopped. Just look around at each store to see which has a better finish. 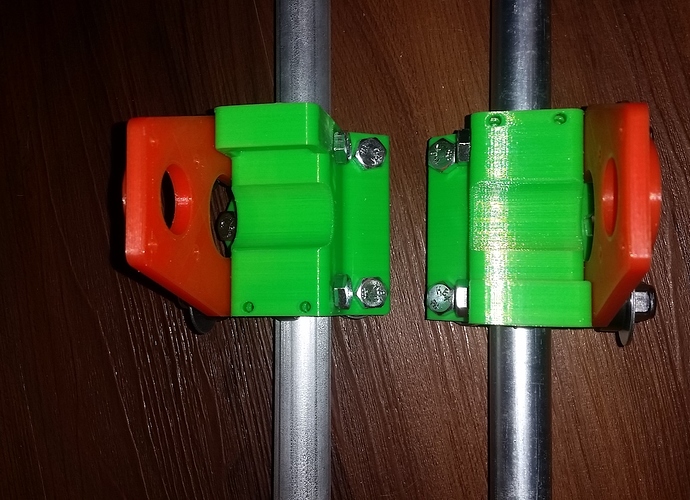 I got really excited when I mved and one of the hardware stores had that smooth conduit. For me though the stuff I got was really soft, the bearings wore flat spot in after only a few hours of use. so it made things worse when I did a lot of repetitive 3d printing and then wanted to move onto milling something large the conduit was uneven. I used it for a while and would just turn the conduit when I wanted a better cut, eventually I replaced it with sanded “rough” emt. Hopefully you found a smooth and harder version of what I have here that would be awesome!

So, I wonder if I should just use the sanded down EMT? Or maybe the smooth one might work?

So, has anyone ever tried filling the EMT with concrete??

Try the smooth one for sure. If they down wear down real quick you will have to give us the brand name so every one can go looking for it.

You would be adding considerable mass and almost no rigidity. Best you could hope for is some vibration damping.

This gets asked a lot.

I did actually think about trying to attach a vetical piece of flat stock to the bottom of all the outer conduit frame members. This seems as though it would add rigidity and keep it from sagging.

Yes it works and there are supports on thingiverse.

There are lots of improvements that can be done, but please try it as designed first. I have not found a need to change anything and I use it for all kinds of materials and am constantly cutting 15"x15" printer parts.

If you have a special need then yes change it for your purpose but I think you will find it just works as is.

Yes I will try as is first. I was just thinking about other things if needed to modify for special situation.

I will let you know if this smooth conduit does not wear down.

I’ve been reading the various posts about EMT conduit. I wasn’t happy with the finish on the conduit I got from Home Depot. Since I currently don’t know where else to source a better conduit, I decided to sand the galvanized smooth. Worst case scenario is I have to spend another $20 on new conduit.

Conduit is manufactured from flat stock that is formed and welded with the ID being the major tolerance. After it’s formed, it gets galvanized. Either through dipping or spraying and electrolysis. Don’t really care how that’s done, the point being that it’s sloppy and irregular by default. So I figured as long as I was somewhat symmetrical in my sanding style, I wasn’t going to knock it too far out of true. I found this new sandpaper at my local Ace Hardware called 3M Sandblaster. Instead of a paper backing it uses a rubbery kind of plastic. It works GREAT! Doesn’t fall apart or clog. Just use it until it’s abrasiveness is no longer productive.

So I got a bucket of water, wrapped the pre-perforated half sheet (100 grit) around the conduit and started sanding like I was using a pool queue. Got quite a few funny looks from passersby. Sanding and rotating to keep things even. Found that generally that the zinc was heavier nearer the seam weld. I sanded until it was mostly smooth. At tat point, the weld was plainly visible and the steel under the zinc was starting to show through.
I measured the stock Wheatland EMT from Home Depot and compared it to the EMT that I sanded and I had removed about .005". Seating a piece in one of my assembled rollers after loosening/tightening the bearing bolts and it went from grumbling over the raw conduit to moving like butter. I’m fairly confident that I didn’t weaken it or take it out of round anymore than it started out. If anything it’s probably closer to true. I’ll be finding out soon. Gonna finish last two pieces with the 100 grit. Gonna apply the 200 grit for grins.

Is there a mostly printed lathe project floating around? It doesn’t have to be too robust, just be able to remove a few thousandths while truing conduit up. I’d just mount up a hand router with a grinding wheel that could dial in while spinning and traversing the length.

Any thoughts on chrome plating trued conduit? I don’t really know the pros and cons.

One last thing: A huge thank you to Ted for hand delivering my hardware bundle on the very same day that I ordered it!!! I know you said you were going to be in the area anyways, but I still think that’s above and beyond and I thank you.

Sounds like a good idea to me Steve. As long as it does’t mess anything else up. The chrome plating idea is interesting. I have a lathe at work and was also considering using it to clean up the conduit. Another idea is electropolishing, which I also have at work, but don’t have easy access too.

I may end up just trying the sanding thing as well.

No more sanding for me! I have done it a few times with a long flat sanding block, and then an orbital sander. I did it just to keep the machine a bit cleaner. The zinc comes off really quickly under the bearing load so I wasn’t worried about surface finish. It does make a nasty mess when it flakes off though. Now that the 1" version is done, I went and got a bunch of 1" OD stainless and that stuff is more rigid and smooth as silk, no sandpaper needed.

I actually picked it up at ABC supply When I was dropping off your box! Cool place.