Converting images to g code...inkscape to makercam to estlcam to mpcnc

So I found a tutorial on youtube to turn images into something I can run on the MPCNC router (when its put together). He takes an image into Inkscape does a trace bitmap and then exports as a SVG, then importing it into Makercam choosing tool length, z height, ect and out comes the g code.

My question is do I need to further tweak the g code from Makercam for the MPCNC to work? I would imagine I would put it into estlcam which I will gladly pay for when the time comes. But as far as that would go im lost as to what to do next. How would chose where the g92 starts?

You can import the SVG into Estlcam. You don’t need MasterCam. I don’t know anything about mastercam, but there are some considerations for the MPCNC, specifically for Marlin.

Converting an image using inkscape to .svg is a great skill to have and you can really do a lot of neat projects if you know how to do it.

ArtCAM has been picked up rebranded and is now being sold as CarveCo. I bought in when the pre-release discount was offered but sadly haven’t had a LOT of time to play with it. It’s “on the list” though for the month of October for me as it’s my quiet season.

That video is quite misleading. I’ve seen it many times before in my quest to turn greyscale photos into a 3d carve. The source image for that carve is a pre-prepared height map. If you google that term you’ll find all kinds of height maps that look like “funny greyscale images”. Almost like an XRay. THAT’S the kind of image you need to be able to generate if your hoping for 3d carves like that.

There are tools in CarveCo that I’ve played around with that help you sculpt off of a photo relief which starts as a lithophane type relief but it’s complex and by no means a ‘moneymaker’…meaning I’ve yet to figure out a quick enough way to do it such that when sold as a “product” it won’t either cost the customer thousands of dollars OR net me pennies per hour for my time. I keep reminding myself if it was easy there would be a tool out there for it. And I’d have found it by now. There are a few of us in here chasing that holy grail.

That aside, cutting 2d graphics (clip art) is great and the first video is a good introduction to Inkscape - a very powerful vector graphics program.

wow carveco is way out of my budget for this hobby

So follow up, ive been getting more used to using ESTLCAM with images from INKSCAPE using the trace bitmap feature. Its been working pretty well so far. Inkscape has a pretty big learning curve but ill eventually get it.

All borrowed from the internets turned into SVGS 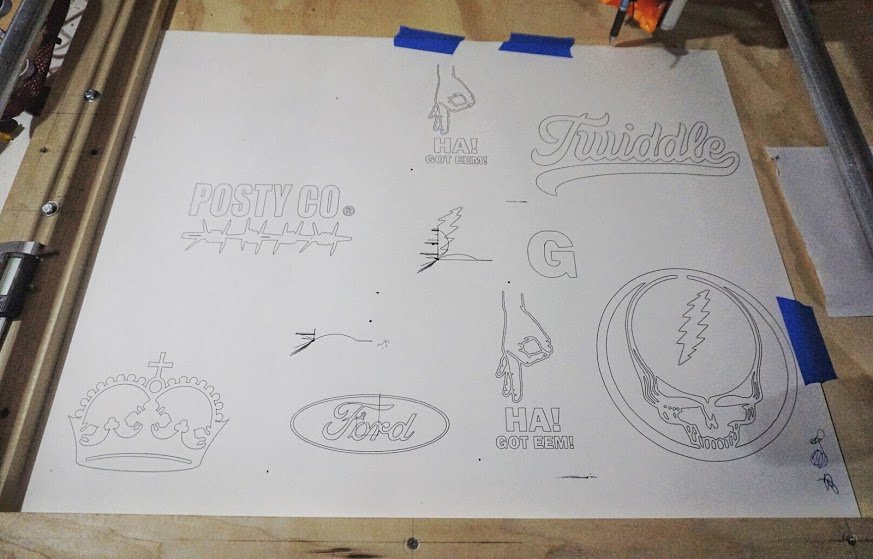 Inkscape is really a powerful program, do not get frustrated if it takes time. Lots of people make a living using vector graphics programs (adobe illustrator). For the basics we do it should not take too long and then it gets a lot easier googling things that you need to do once and a while when you learn the lingo.