[attachment file=45575]
Here’s the results of my first real attempt at vinyl cutting. I used Ryan’s mount and the cutter from the store. The mount is another piece of clever design as there is some flex in the mount that works like a variable pressure foot. As a result the Z height is not super critical. The blade depth is critical though so you need to follow Ryan’s suggestions for setting it. Of course I tried the hello world of the MPCNC. I used the vinyl as a stencil on birch plywood and used 24 karat gold spray can, that’s what it said on the label anyway. The vinyl stencil produces very sharp and clean lines, another great use for the MPCNC.

I just followed the instructions for the cutter depth from Ryan’s blog post and used Fusion 360 to generate the tool path. I used the 2D trace in CAM, 1500 mm/min for the feed rate and 0.15mm lead in. Tool choice in Fusion 360 doesn’t matter much as the trace function just follows a path. I did use the lead in and that seemed to work quite well. 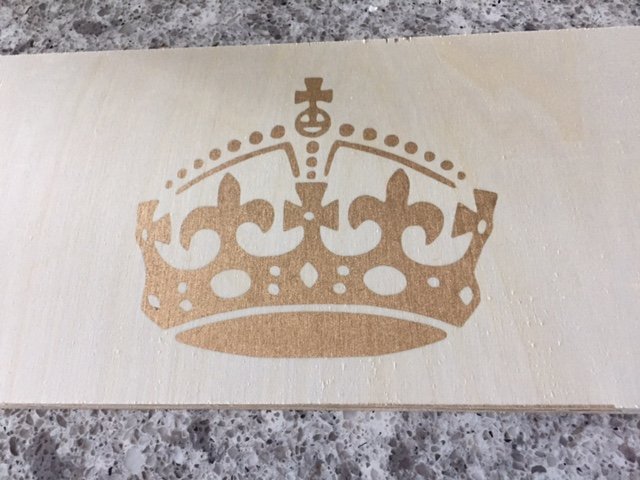 Looks awesome. Once you get the hang of a lead in it makes great stickers. You can also get some iron on material to make some quick and dirty shirts as well. I still have a few I made.

Did you notice a big difference with the lead in? What feed rate did you use? The commercial machines seem quite quick.

I’m truly impressed with this application for the MPCNC.

Commercial machines do an automatic lead in, and they are much much faster. There is no comparison there, but they can’t throw around a router…

I realize this is an old thread, but hopefully someone sees this! I am doing some vinyl cutting with my MPCNC and using estlcam to set up[ my G-Code. Wondered if there is a setting that will have the path “over-cut” a few millimeters. What I mean by this is, start the cut at point a, cut around the object, and continue slightly past point A before moving on to the next cut. I am noticing that my drag knife can leave a small piece uncut at the start/finish point of the object because of the pivoting of the blade.I thought that might be done with the “Lead-in” command, but am not sure how to make that work. Any assistance is appreciated!

I have a few pictures showing how this is done on the vinyl cutting page.

Could you use the vinyl cutter in the shop to cut wood veneer? Or would a laser be better suited?

I am not sure either is the right tool for that. I don’t know too much about it though.

Thanks Ryan. the lead in method works, but I am reaching out to Christian at estlcam as well to see if there is a better way. I will post it here if there is!

I have vcarve/aspire, it allows you to put loops at the corners specifically for use with a drag knife. I’m sure there’s some vinyl specific software out there available for much less or free. Might not work with Marlin though probably grbl.

Inkscape may have something actually most likely should work with Marlin. InkCut is one of them