Was playing with my drag knife this weekend and some of the real fine details and sharp corners were pulling up. I was cutting it on a glass mirror using the roland style cutter with a brand new blade with Ryan’s knife holder.

Could it be too much pressure? Not enough pressure? Cutting too slow, too fast?

Are you using gcode that compensates for the drag knife? Because the tip of the drag knife trails the center point of the tool you have to add extra pivots in the gcode to compensate.

Here’s a page from a drag knife manufacturer that explains and includes an excell spreadsheet for adding the compensations to existing gcode files:
http://donektools.com/free-cnc-router-software/links-2/

I believe dxf2gcode can also do the compensations, but I’ve not had any luck getting dxf2gcode to read any of my dxf files yet

Well that just added a new layer of complexity LOL. Now to see if I can figure this out. Laser cutting is much easier… I am aware of the dangers of vinyl and lasers. Ventilation is good and I do not do much vinyl nor do I staying the room while its cutting.

@vicious1 will estlcam with arcs off run the drag knife properly?

I’d really like to know the answer to this also. Estlcam has a drag knife setting for Estlcam firmware. I plan to test it out soon, but I’m curious if anyone has used it already.

Well you should essentially be getting .025mm (or maybe .05mm) rounded corners from the tip of the carbide being back offset to make sure it drags in the right direction. For small letters and things this makes a big difference, large stuff you hardly notice it.

My vinyl cutting software had that setting built in, But I don’t own it anymore.

To use CAM software you would have to overcut the corners, that might work.

This could be a cool request for Christian from ESTLCAM, He might really like the opportunity to make his amazing software more versatile. just a tip offset setting and it could work for the small drag knifes or the large razor blade style.

Estlcam does have a drag knife setting for the Estlcam firmware. I finally got around to trying it. The only parameter you can adjust is the blade offset, but it seems to work decently well (the origin corner is the trickiest).

It’s important that you set the blade correctly and get your Z axis zeroed properly, so the corner actions will have the desired effect. I think I can get even better results if I spend more time tinkering.

Picture of a square I just cut: https://www.amazon.com/photos/share/HuOccrTcwfNJIZ9W9gkq3d3nDJ3ckiJ3xQu0yNOqdAo

Little rough but pretty close. Did you set the corner overcuts? What angles did you use?

Yeah, a bit rough, but better than nothing and I think it can be improved upon. My current MPCNC setup is far from ideal for a drag knife, so someone else might do better just because their machine is set up better. My waste board is not completely flat, which is absolutely needed for corner actions to work correctly.

I didn’t use overcuts because I wanted to see how sharp I could make the corners with the Estlcam drag knife settings. Maybe I’m missing something though. Aren’t overcuts used for rounding off outer corners?

Guys, where did you find the Drag Knife possibility in Estlcam? Can you post a short manual how to use this?

Ryan thanks again for the links! Due to some reason even Google was not able to find them

So I was experimenting with my Drag Knife and kind of Depron Foam (quite hard foam of 4mm height), and i havent found any solution that will be both easy and acceptable. I found that when cutting all 4mm at once, on every sharp corner I have to lift the knife and re-prime it (slowly move it into new cut). That means that in ESTLCAM you can not automatically generate such drawings, for example for rectangle you will need to create 4 separate lines with 4 separate starting points for the knife… Which is quite sad and boring…

Am I doing something wrong?

I am still wondering what was that Drag Knife support Mic Vee was mentioning? I havent found a single mention of Drag Knife in ESTLCAM docs

4mm? I would drag a endmill though it, drag knife usually are meant for much thinner material up to sandblast mask at maybe 1.5mm.

Those Donek drag-knives use a utility blade and can do 1/4" or so. They’re not cheap but do the job nicely, it appears… note the Z moves with change of direction (part of the corner compensation)

I helped a guy visualize why mangled corners and the need for corner compensation once with a simple illustration – stab butter with tip of butter knife and twist.

I started with the little Chinese cutter as recommended and sold by Ryan, and found it fine for vinyl. I’ve made some nice decals with that. I’ve found fairly sharp corners no problem with no corner actions on that because the blade and offset are so small. But I haven’t done much lettering where it would show up more.

Having played with cardboard cutting on a laser, I’ve turned my attention to cutting out bigger shapes in cardboard with the MPCNC. Hence I made one of these:

But put an additional spring in the assembly. Using that I can cut 7mm cardboard in several passes, but it fails occasionally (blade sideways, emergency stop!), so I’ve been thinking about building variable offset into the design. Donek’s tools come with different offsets for different depth and cut radius specs. Only trying to cut circles at the moment, but would use the Donek spreadsheet to do corner actions if needed.

Funny that you showed up dkj4linux, I came to the conclusion on the train this morning that the answer for thick cardboard was to build your needle cutter! I was always destined to do that, but this has given me the push.

Funny that you showed up dkj4linux, I came to the conclusion on the train this morning that the answer for thick cardboard was to build your needle cutter! I was always destined to do that, but this has given me the push.

I was actually going to suggest trying the needle

I’ve done some cardboard with mine and it can work…but is definitely trickier than foam and foam board due to the extra resistance. The flywheel style cutter is a far better choice, I don’t think a crank style cutter would stand a chance against cardboard as the crank would probably deform from the pressure. I did find I had to slow it down quite a bit compared to foam, and the other issue I had was my needle coming off the bearing - a drop of CA glue seems to have solved that, but a day later moebeast shared his printed needle retainer and it’s probably a better option.

2.8w laser can also do well on some cardboards…but I’ve had mixed results. Air assist helps a LOT, without it I tended to catch the cardboard on fire before getting a full cut. The cases that girl scout cookies come in proved ridiculously hard to cut with a laser. I kind of wonder if they’re treated with something to make them fire resistant…but then again they also tended to burst into flames before cutting so maybe not

One of those days I guess Jason. It was your instructable I was reading on the train this morning. You and dkj4linux were my bookmarks for the needle cutter. Thanks both for all your great work.

The birth of this process for me was using my new 40w laser cutter and Fusion 360 slicer (I think it used to be 123d make), and finding the a4 footprint a bit restrictive. On that machine, I need to cut 7mm double wall cardboard with the same speed and power(15mm/s, 17mA) as 3mm ply just to go through in one pass , so it is surprisingly tough stuff. Silly of me to assume that it would be as easy as foam on the needle cutter.

From my experiments, 3mm or single wall card cuts just fine with the big drag knife. The thick double wall is very strong stuff by comparison though, so I expect it will give a lot more structure to projects.

I already had in mind the flywheel over the crank from reading you earlier - I want to be able to push the envelope I think.

One of those days I guess Jason. It was your instructable I was reading on the train this morning. You and dkj4linux were my bookmarks for the needle cutter. Thanks both for all your great work.

Well, you’re inspiring me right back. I love my needle and laser…but also love having as many tools as possible as options

And I’ve been wanting to mess with a drag knife (I have the vinyl one which is nice for vinyl, but I want a bigger one to play with.)

So just fired up onshape and modified the knife you shared to have a hicwic mount:

Will have to print it up tonight and give it a try. I’m still not big on drag knifes overall due to the need for the extra motions…but figure I should give on an actual try 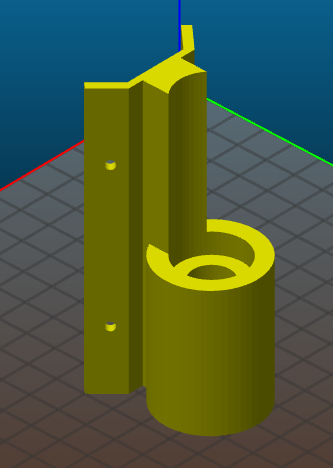 Quick work! I’m new to CAD, having done stuff as needed in Sketchup for years. I’m using F360, and learning. Hope to be in a place where I can work as quickly as that soon. Anyway your design might turn out to be useful because I recently started printing bits of hicwic.

Let us know how it goes. To honour the OP and thread, I promise to try out and comment on Donek’s corner actions XLS once I’ve managed to try moving the drag knife offset.