Cheap wood, some flat black paint and a MPCNC Primo is all it takes to make some good friends very happy. 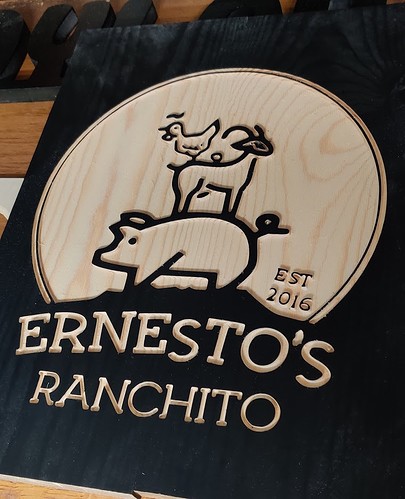 The detail is great and that tiny little outline on the circle is impressive!

Thanks for the trade, enjoying it while browsing the forums!!

12 hour cut with a very tired 1mm bit. What the mpcnc v8 will need is a bit-changing mechanism

Love the font, which font is this?

I’ve made quite a similar sign recently, and had the same worries that you did - in terms of cutting time vs bit size vs details in the cut!

I ended up using a big bit for the open areas, and a smaller bit for the smaller details. I had to set up several manual paths in estlcam, it wasn’t as complicated as I initally feared. I used three different bits in the end. I found a good homing position and used dual endstops, so the cut was fairly decent. I think I got more fuzzy edges than necessary, because the bits aren’t 100% precise, and neither the end stops - so I had to do a some finishing after cutting.

I thought about bit changes, but I feared that I’d see the transition lines. I eyeball the x/y and use a putty knife for the Z. If I know that I’ll do a bit change, I’ll sink the first bit into the zero area, outside the finished work by a mm. My cuts don’t need to be so precise that the thickness of the putty knife is a concern. I have the dual end-stop switches installed, but they aren’t wired-up. I got too excited to start using the machine to finish that. So-far, after several months, I haven’t needed them anyway. I did order a z-axis touch probe, and I intend to install it this weekend. We’ll see how that goes

Jamie solved that (tool change) for the burly. I’m sure it could translate to the Primo.