Over in the Primo Thread folks were discussing the filament extrusion, filament recycling and whether someone could do it at home. I fell down that particular rabbit hole a few weeks ago and after some gentle prodding am writing up a brief treatment of the subject.

tl;dr: Unless you are made of money or have the patience of a saint and the precision of swiss watch you can’t expect to extrude filament at home that will in any way compete with what is available commercially.

Desktop Extruders
Desktop extruders, whether scratch, kit, or commercially built come in 2 variants which I will call (for simplicity) the Filastruder and the Filabot.

Filastruder
These all have a length of (generally black iron) pipe with a window cut in it to feed plastic and a closely fitted wooden auger bit inside to convey the plastic towards the meltzone. Material is melted at/past the end of the screw by heating elements surrounding the pipe and then forced out through a nozzle at the far end. Filament is either pulled down by gravity in vertical configurations or drawn by a set of traction rollers in a horizontal configuration. 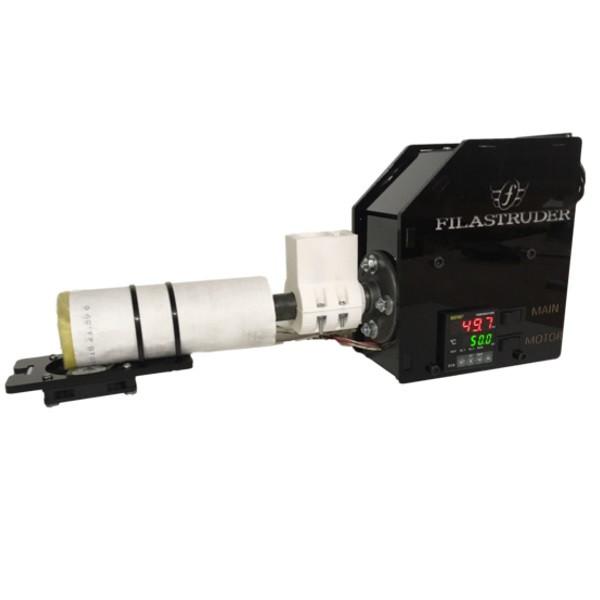 In stock, ready to ship.  Free domestic shipping, $60 internationally. Includes 1lb of ABS plastic for free! Do you desire the ability to produce filament on demand, as it is needed, in the color and size appropriate for your 3D project?...

Filabot
The Filabot uses a proper extrusion screw rather than a auger bit. The auger bit of the Filastruder and friends just moves material along much like the gears in a 3d printer’s extruder just push filament into the melt zone. The extrusion screwhowever _moves material, compresses, mixes, and meters out material in a much more controlled fashion (more info). These machines often will have one or more heaters along the barrel to better manage the melting process. Like the machines above they will have some means to control the filament drawn out of the machine (either gravity or traction) and will often (always?) have an air or water cooling stage immediately after the nozzle to make sure the filament cools quickly and evenly which helps retain proper shape and diameter.

You will notice something about all of the links for Filastruder-like machines: they are all >6years old. Also notice how nobody has posted any follow up videos saying how great their extruder is working and how much money they are saving recycling their prints.

The Filabot-type machines appear to have better success actually producing a product, but are not what anyone would call affordable, it seems.

Thanks for the write up. I went down the same rabbit hole myself and drew the same conclusions.

It will be really nice when someone gets that going.

I want to get some of those precious plastics machines up and running, but ahead of it in the queue are several other projects, including a Primo and an MP3DP I have 80% sourced.

Thanks for this. You wrote it, I read it!

I should mention that there are a few “pellet extruders” hotends that are fed by a hopper full of pellets rather than a spool of filament) that are out there in the wild and appear to have some amount of functionality. However they seem to have consistency issues and are only used w/ large nozzles printing really thick lines.

SeeMeCNC has a huge delta printer w/ a 4mm nozzle that extrudes from pellets: https://www.youtube.com/watch?v=u9CVRVnwtjE

And here is a homebrew granule extruder that uses a conventional .4mm nozzle. It uses finely ground filament granules and prints at only 30mm/s.

Also found this commercial project by mahor.xyz that uses a proper extrusion screw profile. Site is in Spanish though, and can’t find much more information with a quich search.

Doing some more research there are a few more “desktop” offerings out there.

^Those machines have a proper extrusion screw, four heat zones, and an air-jet cooling system and a diameter sensor for closed-loop control. Starting at only $6,213

Just a reminder that “Desktop” is a form-factor, not a market segment…