Finally, some pictures of my kit car project

Especially if the engine is just complaining that there is no abs brake controller.

I’ve got the check engine light on,

Do you have emissions checks where you are? I believe there are some states that still only have them in certain counties. And I learned yesterday that next year when my car will officially be 20 years old it will no longer have to pass an emissions check.

Especially if the engine is just complaining that there is no abs brake controller.

That one actually concerns me a bit, because I’ve gone to some pain to include it. Since it’s not throwing codes, though, I’m wondering if that light is also related to the maf. It’s starting to look like Subaru took the approach “people don’t pay attention to the check engine light…let’s fire ALL the lights so they panic!”

some states that still only have them in certain counties.

I would need it for most cars, but AZ considers this a special build and I do not. A friend of mine said the inspection is fast and easy, and the state was mostly concerned with verifying that he didn’t steal the engine or transmission and charging him an appropriate tax.

I did include a home brew charcoal canister and I’m trying to keep most of the stuff intact.

and the state was mostly concerned with verifying that he didn’t steal the engine or transmission and charging him an appropriate tax.

‘appropriate tax’ is a scary term. I also learned yesterday the state has decided that next year a car 30 years old or older will no longer be subject to inspection but will be declared a ‘classic’ and they’ll likely be assessing a property tax somewhere around $120-150.

Personally , I think if that’s the case it should be challenged and the state should be required to purchase your vehicle for whatever value the tax charged says it should have if it’s just an old beater you’re driving around.

Don’t get me started on taxes.
But I agree that when the state starts using arbitrary classifications to decide how far into our pockets they get to reach, there should definitely be a feedback mechanism. I haven’t had much time to think about it, but I kind of like your solution, carmax style. “Even if you don’t buy ours, we’ll buy yours”.
That would incentivise the state to slightly undervalue our property to account for likely administrative costs to liquidating it, simultaneously DISincentivising people from taking advantage of the assessed value. The amount of tax on the assessed value could be calibrated to some revenue-neutral scale, and boom. Everything is assessed value with a self-regulating escape hatch, no arbitrary categories.
Still not as good as not taxing people on things they’ve worked hard to accumulate (usually with taxed payroll dollars) but I digress.

Hey Tony, I’ve been reading up on this kit - still pretty excited about it, but have started to form a few questions… Hopefully you don’t mind that I’m asking them here (instead of on the F5 forum) but here goes anyway…

Thanks - I’m still in the very early stages of considering this, but it does look like a ton of fun to build! 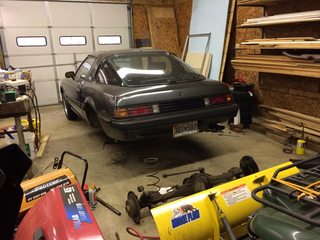 and the two side panels just kinda sprung away - looked very floppy (like a 70’s funny-car) , and got me wondering just how solid the body feels once completed. For example, do the doors feel like “real” car doors, or do they feel like something you need to be very gentle with?

The car door “feel” is largely a question of detents and gaskets. I think with a little work one could get them to feel quite nice. They are quite a bit lighter than OEM doors, though, so I think that will have a huge impact.

The body panels are just fiberglass bolted or riveted on. They stay in place securely, but they aren’t the metal panels bonded and bolted/welded around the entire seam. I haven’t gotten that far yet, but my friend completed and sold his, so I’m familiar. I would say they are solid enough for a car, but I wouldn’t be happy to let anyone lean on them in a significant way. Leaning in reaching for stuff is OK, but leaning because somebody is lazy and tired…not so much. I imagine one could put in some extra effort supporting and/or bonding the panels to the frame as well.

I prefer the C, and that was the plan to begin with. I ended up with the S because of the extra cost for the C and the wife pleading for topless because she’s never had a car without a roof. My plan is to attempt a soft cover, and if I can’t make that work to order a hard top later. It’s supposed to be just a couple hours of work to swap it on.