Hi,
I bought this laser for about a month

It has a control driver and the TTL function I got to test it by connecting it to an Arduino Mega only.

pay no attention to the pin number because I used them a different card from ramps
But now I want to use it to engraving and I understand you need the fw with Marlin declared LASERBEAM function Marlin + Ramps + Arduino.

Does anyone have a way to tell me how should I proceed?

Is there a fw Marlin already with LASERBEAM function so that they only have to declare that the laser 12v are by headtbed mosfet and TTL pin is one of the LCD?
Thank you

Everything you need should be here in Leo69’s instructions, including firmware changes. https://www.v1engineering.com/the-2-8-watt-100-laser/

Hi Vicious1,
thanks for the link that you indicated to me if I understand (having a different laser from that of Leo but Chinese) I have to start from step 5 …

leo essentially uses the fan control pretending to be the laser? 0.0

but when you need to make a path for the laser tool … there will be no fan controls … or not?

Thanks for your help

One thing I do not understand is the negative lead of TTL.
After you check the output voltages on remapped pin shows the connection of the two TTL + and with a TTL- amid resistance …

As I do in this thing?

I can’t say for sure, I have no idea how your laser driver is set.

I would assume the ttl pin is the same, just using a common ground.

Yes the fan is remapped, You do not need a print fan with a laser, your laser fan should always be on hardwired to power. When you want to print flash the other firmware back.

I will agree that the fan does not serve …
Obviously the fan laser cooling will connect to the main power as Leo60 said in the tutorial.

The guide is a reference for a couple of specific drivers and diodes and doesn’t really apply to your laser driver and diode. Did it not come with any documentation?

unfortunately nn. I asked banggood but have no datasheet or anything. I though in the past days I tested the TTL connecting it to the Arduino.

I wanted to However understand how to use it with ramps in order to achieve images or cuts as in photographs that you have shown.

I have this details

I wrote this line of code to control the laser with TTL alimetandolo externally, bringing a negative sull’arduino (common wire) and wire the door TTL PWM 3 of the mega 2560.
and it works…

in this image you can see the point that I TTL modulated with Arduino (alone) to understand if they actually worked with a signal to 5v. 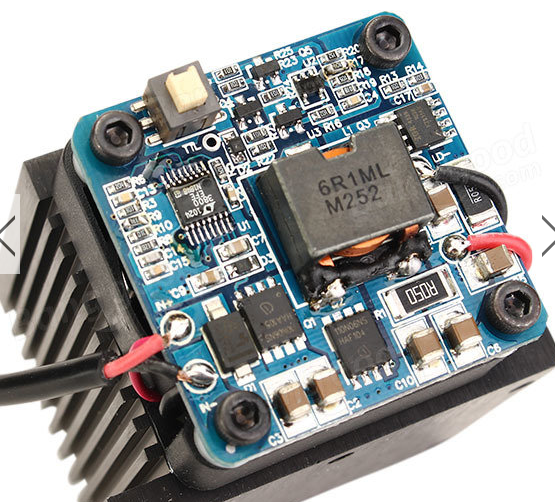 What is that white connector for the TTL? Can you take a picture from the opposite side, looking in to the connector? It looks like a JST connector which should have positive and negative pin.

Sorry Leo in the picture, at the top next to the white button you may notice the individual contact of TTL.
The 12v white button in the upper left allows, by feeding the laser to exchange between pointing mode and cutting mode
The first is to place it at the desired point and the second burning at full power (as if it were 255)

the part below the card is all empty, ie there are no tracks or visible components, and even connector of any kind.

I was able to modulate the laser as I thought. Work!
Firmware to say to heat the hotend and in place of the resistance is the 12v power of the laser driver.

To TTL cable to connect the modulation pin 44 after remapped as by Leo69 guide.

Excellent! Glad you figured it out.

I await your consideration