Getting random reboots while cutting

[attachment file=107405]
I’ve been successfully cutting like crazy for weeks and all of a sudden I’m getting random reboots. Will too much load on the steppers cause this? I’m cutting 3/8" PVC sheet with a 7/8" V-groove bit. 4 passes, and it restarts on the last pass. I’ve tried another power cord and power supply with the same result. Anything I can adjust? Any chance that router cord hanging by the Rambo is causing interference? Has my luck just ran out?

I’ve wiggled wires while it’s cutting but haven’t been able to trigger a restart. 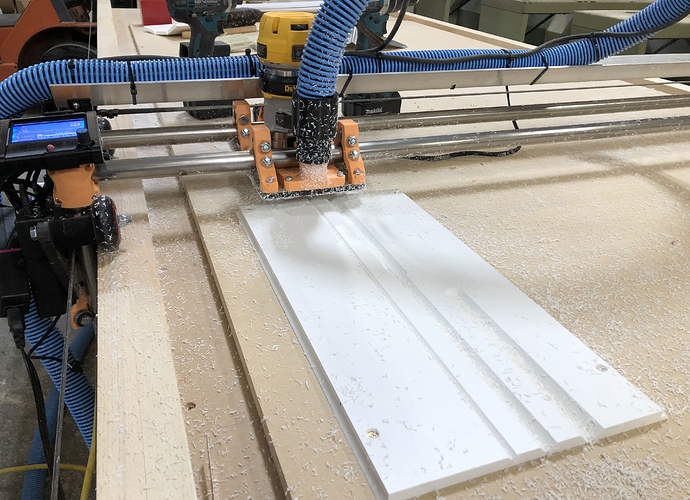 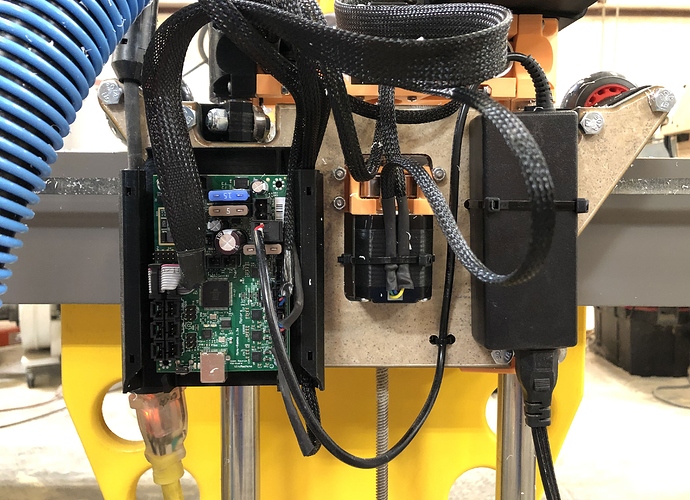 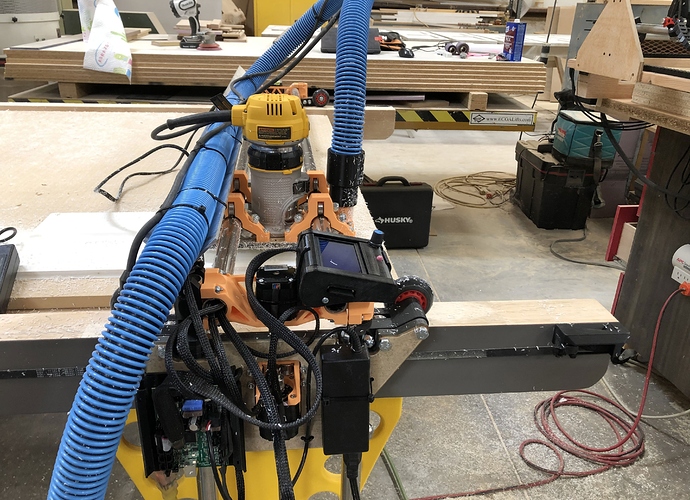 Have you anything else on that circuit? Air compressor, refrigerator, vacuum, something else that might kick in and cause excessive noise on the power?

There’s other stuff plugged in but nothing was running. It’s odd, it ran 4 hours this morning surfacing the spoil board without a hiccup.

Im assuming you’re running from LCD/SD and nothing is connected to the usb, right?

A long time ago, we had issues where too many steps/s was causing reboots. We haven’t seen that recentky because 1) we switched away from allthread, which required an enormous amount of steps/mm (4500ish). 2) In later Marlin versions, I thought it would fail more gracefully. 3) We have reduced the Z speed in most CAM.

Electrical noise is always black magic, but unless you’re running a plasma cutter, I doubt that’s it.

I could imagine the power suppy being a problem, but it would have to dip below 5V to reset the rambo.

Are you certain the gcode files are complete? I’ve had a problem where things would stop mid job and I was pulling my hair out until I realized it was that the second half of the gcode was missing from the files. I’m pretty sure I did something silly like copying the gcode before it was done, but I’m still not sure how that happened.

Yes Jeffeb3, straight from SD card and LCD, no USB. I’ve changed nothing in Marlin. If I run the program in the air, it will complete normally. So, is heavy load a possibility? When the V Groove bit cuts the last pass, it’s cutting quite a bit of material. Tomorrow I’ll try more passes and slow down and see if the problem goes away. But I’ve been cutting 3/8" PVC with an 1/8" two flute in one pass with no problem and I cut 1" PVC in four passes with a 1/4" two flute easily. I grabbed the power supply off the MPCNC and had the same problem. I’ll change the extension cord just to be sure.

High load won’t affect the current drawn by your stepper drivers. But the tool will draw more current when it’s under load. I have a hard time seeing how this would create a problem except in extreme circumatances…

My money is on, loose connection somewhere, or bad Gcode. The first year we used to have these problems when the bad Gcode would freak out the boards and any number of things could happen including rebooting.

Any chance it could be static electricity charge triggering restart? This material makes a lot of static electricity. We sometimes get a pretty good shock just from sliding sheets onto the saw. If so, what’s a good grounding strategy? I figured I’d swap the board Monday and if it still does it, start looking at connections. I ran the program five times without cutting material with no problem. It ran 4 hours Friday morning cutting mdf. Only started the restarts cutting the PVC. Of course, cutting air doesn’t make as much vibration so it still could be loose connection somewhere.

Yeah, a shock could cause that. If you’re getting shocks into the mini rambo enough to reset it, then I think you’re dangerously close to killing it.

The answer to static electricity is grounded boxes everywhere. Metal boxes that have a good connection to ground. Starting with the rambo case, then the LCD and then grounding one screw from each motor.

All that needs to be grounded to something substantial, not the negative terminal on the PSU. The ground plug on an AC plug would work, but be extra careful with the AC terminals.

Is your dust collection grounded?

I would say it might be the plastic material rubbing, which would generate a lot of static.

Tha’ts basically how some of the high voltage static electricity generators work, they rub some plastics onto each other and you get giant sparks or messy flying hairs.

I would try to ground the plastic board. To do that, I’d just take an extension chord, connect a wire to the earth of my home and the other end to the board. Not sure if will work since I never tried it myself for this particular purpose, but I see no reason why it wouldn’t. That did seem to work when I grounded my plasma cutter so I guess it’s the same principle here.

Maybe use some aluminum foil/tape to get a larger contact surface between your earth wire and your plastic board.

Well, I’ve grounded all the steppers, wrapped the control board box in aluminum. Ran a round wire down the dust collector hose. All to no avail. I think I’m going with Ryan on this and assume a bad connection somewhere. I’m going to rewire the whole shebang. I ordered 100’ of 4 conductor 22ga. stranded/shielded cable. I have plenty of the Dupont connectors and the magnification needed to crimp them.

I had considered trying to ground the sheet with aluminum tape on the spoil board, not sure if it would have any effect or not. Won’t hurt to try.

It’ll run several times with no problem, then suddenly reset during the cut. The last thing I tried was putting connection enhancer (Stabilant 22) on all the connectors to the Rambo. It ran three times and then decided to reset.

We have a winner!. Rewired and back in bidness. Not sure where the problem was, but it’s gone. No more restarts (yet, anyway). Thanks, Ryan and everyone else. 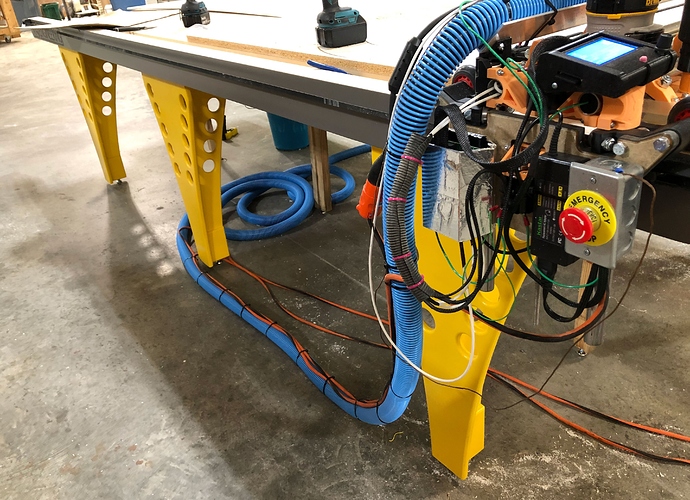 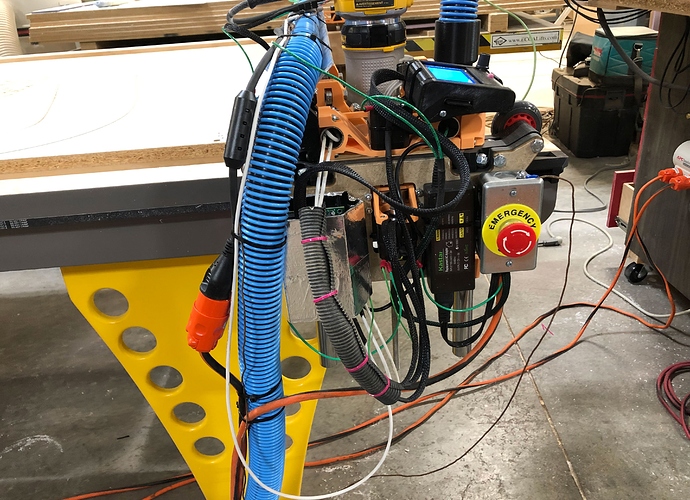 Awesome. That is such a nice looking low rider. Do you have any idea the approx. number of hours it’s been running?

Not sure how many hours, several projects completed. I’d say less than 100 hours but more than 20. Still working the kinks out and learning things. Haven’t turned anything over to the minions yet but that is the goal. Want to get to the point of easy repeatability, do this, this and this and run this file. There are things that we do over and over that should be as easy as loading material and running the program.

I spent around $800 building the machine and expect it to pay for itself within a few weeks.

Want to get to the point of easy repeatability, do this, this and this and run this file. There are things that we do over and over that should be as easy as loading material and running the program.

I put some thought into this myself for making the lowrider parts for sale. Two ways really, in my head at least. 1, dual endstops and fixtures, make the absolute maximum use of the material, dial in all the steps for fast turn over. 2, Start the machine from the hardstops, leave a little more room on the rough stock and cut a bit slower.

As odd as it might sound I went for #2, as long as the parts were accurate sacrificing a little cut time and some material meant I could basically throw a piece down drive a few screws hit go and do other things in the shop. For me having a machine do something while I do something else is massive, ultra machine efficiency just meant I had to spend more time positioning and changing bits more frequently etc. My time is more valuable than machine time. Same reason I don’t have my printers running at full tilt, Taking it a bit easy means less maintenance and issues. I can always build another machine if needed.

Excited to see how this plays out in a real work environment.