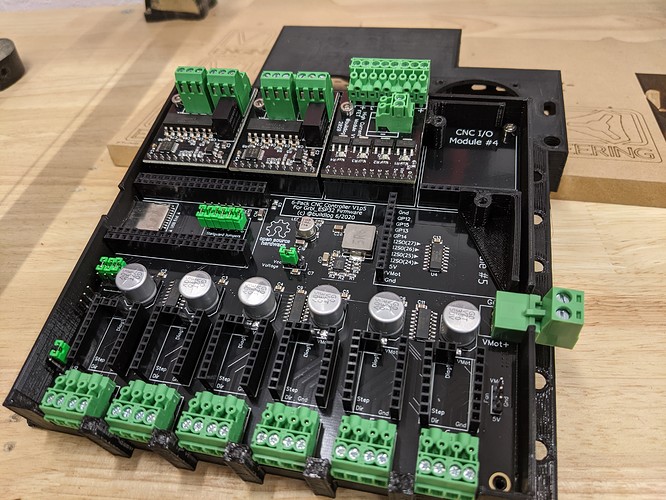 If the design is any indication of the functionality this is going to be fun. Black and green…green jumpers…and the indicator light is even green. Just a nice design and it looks like he had fun designing it.

Flashing is simple, the web/AP/Bluetooth interface is great and more is planned for it, all the functions are there. Upload is a nice touch. (I frequently make a file and run up and down stairs between computers, forget the memory stick and have to go back)

I have it up and running with some 2130’s but it looks like UART support is on the near horizon.

Anyone have one, what drivers, any special settings, what modules did you get? Trying to feel this thing out, lots I don’t know about Grbl.

So far motion is different, seems better. The crown is the same, but my arc torture test seems better it moves as I expect it to.

I want to see if you can tell a difference with lasers.

I have mentioned a few times, barts boards are great. I haven’t found a reason to use this big one, but I have the mpcnc ine in my low rider and the smaller plotter ones in some of my other machines.

I have a 6-pack on the way to replace the MPCNC_ESP32 controller on my Lowrider. I am using adapters to control external drivers, 4X Input modules to connect limit switches and a RS485 module to control my spindle.
Uploading gcode to the controller’s SD card is easy using the WebUI. Then using the same WebUI from a tablet makes setup and job runs a snap.
I also bought a quad mosfet module for future use: nothing definite yet.

Bart has uploaded a video recently on his channel showing one of these boards on a toolchanger CNC router…worth a look.
https://www.youtube.com/watch?v=3ikLcC5NidU&t=440s

Doesn’t that mean coolstep is not on if the trigger is set to the max velocity? Or does that mean do not use coolstep while accelerating and decelerating?

I am digging deeper because Coolstep is pretty loud when engaged. Seems like it should at least be quiet until it is moving, if it is not moving coolstep should have the current super low right, and a machine drawing in air should have a pretty low current as well. This gets warm while testing. I am kinda guessing that the setting is in there but never been tuned?

Oooooh I think I am learning.

So no to experiment, something super low to get it always on, and a low speed I can test like 2mm/s.

Over the air flashing has never come in more handy!

No, Still funky. Read through the data sheet and I do not think it is fully implemented yet pretty sure it requires stallguard to be on to sense the resistance.

Okay, I am digging this defaults thing for configs.

Marlin makes you go through and change settings all over the place. Grbl (or GRBL ESP32 at least) Lets you pull any command you want and define it however you need in YOUR config file. Might take a tiny bit more work initially but dang now I have any changed settings in one place. Easy edits, no keeping track of anything other than one file.

Even the pins are in it.

I think i may get that atc changer that bart was playong with for the 65mm watercooled 1.5kw spindle and get it running

Ok, is this the future for 32 bit control for mpcnc?

I know there has been a lot of effort put into Skr Pro and Marlin but there always seems to be yet another issue. Is GRBL_ESP32 the answer?

@vicious1 what drivers were you using in the board you were playing with?

I am hoping to offer this board or have it offered in some standard form soon. That would let people choose which they prefer, and still have awesome support around here. As awesome as this is though I still believe most of the CNC users would prefer not to have to have a phone or computer connected (like myself). I hope to spend more time with this and change my mind about that.

I must be missing something, since it seems most cnc machines have a computer hooked up in general (the sender). Are folks cutting with just an SD card with marlin or something? I did that when I first got my printer, but even that has octoprint now.

When I first saw no screen I thought “How do you use it?” but then I realized there is a web interface with wifi.

I already have moved a computer to my shop to run the MPCNC, this means I get to move it to somewhere in the shop where it can stay clean and I don’t have to deal with a USB cable.

Also, I believe GRBL handles rapids correctly with a separate understanding of federate for G0. It also seems Laser support may be more fully developed.

For now I will continue to use my SKR PRO and Marlin as I learn more about CNC but I’m watching this with real interest.

Are folks cutting with just an SD card with marlin or something?

Yup, most of the time.

then I realized there is a web interface with wifi.

The web interface is awesome, you can connect and disconnected without disturbing a running job even. I think it is superior and you can pretty easily handle most config setting easily as well as over the air firmware updates, wireless file transfer. It is pretty cool.

Also, I believe GRBL handles rapids correctly with a separate understanding of federate for G0. It also seems Laser support may be more fully developed.

Yes, Marlin is understanding G0 much better these days though. The laser I have not tested, it does seem to be solid. Messing with them more, I think Marlin is actually kinda over thinking it. The laser software does handle most of the heavy lifting so there is not as much need for speed/power ramping as I thought as long as you use over burn. The only place I see it needed is vector burning and that is probably going to be tough to dial in perfectly on either system, but they both offer it.

In the end not as big of a gap as people make it out to be, but I think GRBL has simplicity on it’s side in a good way. Marlin is heavily skewed to extruders and they take a ton of work to get right, where GRBL doesn’t even attempt them.

Great to hear you are looking at going this direction. I get that a lot of mpcnc’ers are coming from printing, which makes marlin a cozy place. Marlin is 3dp firmware adapted to cnc, and grbl is from the start an nc centric firmware. 3dp is a totally different ballgame where jerks are good, you gotta worry about linear advance, etc… nothing like cnc where arc commands are standard and all that “between the lines” processing is not needed (or even wanted).

Sounds like this esp32 thing may have all the chops needed to fill in for my pi running bCNC. If not yet, that would be really cool to see some day in the future. I run all kinds of esp devices around my home; they are very easy to work with as well as reliable (several running 24-7, 8years straight and going strong). Plus, it would be nice to use my pi3 for retro gaming again lol.

Bart has done an amazing job with his interface, I was able to use it and poke around in just a couple minutes. It is a complete system, and has a ton of add on options already, amazing execution and I am not seeing any weaknesses of any kind yet. It is nice to buy a board and know you can change it very easily to fit your needs. Once we get this next round of Marlin updates rolling, I am planning on spending a lot more time with this system.

You need additional modules for endstops and I don’t see a module for controling PWM signal for laser?

I don;t think I would be able to ship it that cheaply…Shipping sucks and is a rough part of biz. International shipping is even worse.

good laser board, https://www.tindie.com/products/33366583/5v-output-module/
I think this is even an good option (not positive), https://github.com/bdring/6-Pack_CNC_Controller/wiki/Quad-MOSFET-Module.

I got the second one in hopes of using it as an enable and PWM but did zero research to see if it is possible.

I Missed the PWM-part in the discription

I got the second one in hopes of using it as an enable and PWM but did zero research to see if it is possible.

I would prefer it to have logic level fets, but the On Semi NCV8403A has a pretty decent transfer curve. So it should work for switching small signals like you plan to do.