Grinding sound and vibration in one side of X axis

Hi, I have my MPCNC for about a year, it was working great. I am using MKS Gen L 1.4 board + Marlin dual end stop from V1engineering.

I had to change all foot probably my prints are not the best for strength, installed the new ones, alignments, and squaring all ok.

The only way I could upload the video was compressing it

Any help is more than welcome.

There is no sound on the video, so I’ll just suggest a couple of common things. Check the grub screws on the pully. If they are tight, move the router by hand around the area that is making the noise. See if there is any additional resistance or binding in the area that is making the noise. Place your router in the top right and home the machine. As it is moving to the lower left, stop the router by hand. You will hear a grinding noise. Is this the same noise you are hearing with your problem? This noise, while ugly, is non-destructive. If the noise is the same, then you are looking for something that is physically impeding the movement of the steppers in the area where you hear the noise.

Hi Robert, thanks for the tips, I just download the video from the web and I can get the sound here, so please if you don’t mind the video is in dropbox would you kindly check if it is familiar to you?
I was thinking if a stepper motor drive would be a problem? I dont have spare here and it is difficult to get.
Thanks again 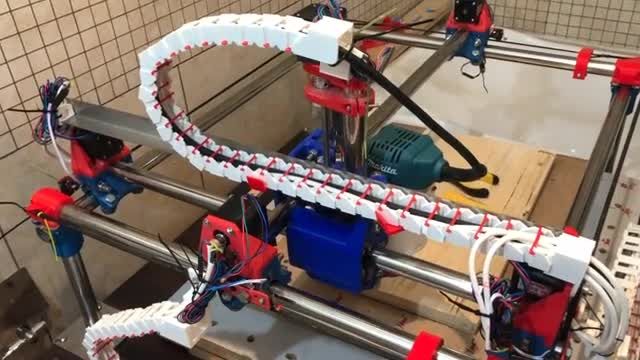 I cannot be 100% certain from the recording, but it sounds like the noise a stepper makes when it is “slipping.” You can easily simulate this by sending your router moving across your rig and reaching up and holding one of the trucks. You should hear a similar noise. Before becoming an active member on this list I assuming the noise was the pulley grinding against the belt, but folks that know far more about this machine and steppers than I do indicate that noise is coming from inside the stepper. They indicate that the noise is caused by the stepper failing to advance forward and on a later step, it whips backwards. I’ve been assured that this behavior, while ugly, is non-destructive. Note if the issue is electrical, the stepper making the noise, is the stepper that is running.

So assuming the noise is the stepper slipping, it is being caused by some sort of resistance to travel. In terms of tracking the problem down, I can see a couple of different areas to check. First, verify that the area causing the problem does not have any more physical resistance than the rest of the area. You can push the router around manually with the power off to check. Also measure the distance between the two tubes to make sure the tubing is not squeezing the trucks at one end. And again the grub screws can cause this problem, and unless you use some thread glue, it is a common source of these kinds of problems. The second area to check is electrical. What I see in the video could be cause by either the stepper not working at all, or if there is an intermittent fault in the wiring, the stepper only working part time. The fault might only happen when the wiring in stressed in a particular way. In that case for part or all the travel, a single stepper is doing all the work.

Another possible source of mechanical drag is if the axis is out of square/parallel when starting and then gets into alignment after it has moved out of the problem zone. The vide appears to me to show the right side moving a different amount than the left in some portions of travel.

Any chance your endstop triggers got bumped or moved when you replaced the feet? Maybe they need to be re-tuned.

Alternatively, any chance one of the new legs isn’t quite vertical?

@robertbu, hi sorry for the delay:

Still trying, please let me know if you have any idea.

@ttraband How can I retune the endstop? but if this is the case why the noise come before triggers the endstop?
As I said above there is a difference of a maximum of 2 millimeters in the square, parallels are very precise.

Still trying, please let me know if you have any idea.

I notice right now that after the noise starts and the machine is stopped, with the MPCNC still energized the axis should not move, but this side is loose, I can move the stepper.

So this is highly likely the root of your problem. And this behavior is exactly what I would expect with one stepper not working part/all of the time and a bit more resistance at the end of the tubing. I’ve had a similar problem. This stepper is either not working or is only working intermittently. Since you’ve swapped the steppers and still have the problem, that leaves wiring, driver, or a board issue. The wiring is the most likely culprit, but, depending on how you wired things, can be hard to test and fix.

I was thinking maybe one of the endstops shifted when you replaced the legs. There’s a tuning process and gcode (M666?) used to tweak the square of the machine with dual endstops.

But if one of the motors is turning freely that means it is not moving its end of the axis. I’ll bet you find a wiring problem once you get a chance to dig into it. I’d double-check the board-end connector pins before pulling the machine apart to get at the other wires.

Good luck. If it was working before you’ll be able to get it working again.

Hi Tom, I will check the wires, but should I check all of them? I mean for all steppers? if others are working would not be safe to keep the way it is?
cheers.

Just check the wires leading to the motor that’s not doing its job.