How many people can only count to 9?

Just curious if any of yall can’t count to 10 on your fingers?
And if you don’t mind how did it happen?
November 23 1999.
Tablesaw. 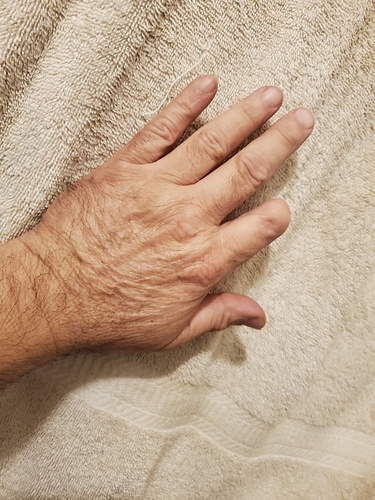 Hey, at least you can count to 9 and a half! Guy I used to work with had a hand that looked exactly like yours. He did his with an alternator belt in a car.

My grandfather was missing a thumb. He was bad with ‘left’ ‘right’ so we always used ‘thumb’ and ‘no thumb’ to tell him which way to turn.

He lost his on a machine where he was a maintenance man. I believe this was pre OSHA.

Had an uncle who lost the last joint of his pinky when he slipped on some folding attic stairs and caught it in the folding metal rails. And my grandmother (on the other side) mangled her ring finger in a Kitchen-Aid mixer…

My father has cut fingers with the table saw repeatedly. Did it twice in one week a couple of years back, but he hasn’t taken any all the way off yet.

Forgot, my grandpa was missing his ring finger. Got it caught in a truck door. Wedding band clamped the finger and they had to take it off. That’s also one of the reasons I don’t wear ties or jewelry.

That’s also one of the reasons I don’t wear ties or jewelry.

When I was an iron worker I cut about 8 wedding rings off from guys that put their hands in the wrong place. They didn’t lose them it just crushed them to the point they wouldn’t come off.
When I got married I told my wife that I will keep the ring on me but not on my hand.

The worst wedding ring story I have heard (totally hearsay) was a ref at a hockey game that managed to get his ring finger between boards when it opened while someone pushed it. Then his finger came back, but the ring and lots of the finger stayed on the other side of the glass.

Since then I have had a healthy case of denial.

Not wise to work around your car’s starter with a wedding ring, or other jewelry, on either.

Correct!
I found that out while welding, the scar has faded a lot over time.

As a counter point, my FIL watched a co-worker pull his finger out of his titanium wedding band before the press flipped it flat. Saved his hand.

Edit: removed his hand unscathed as the titanium ring held against the load for the couple of seconds he needed. Like I said, counterpoint to best practices. Much like my cousin, who suffered major brain damage in a car accident, yet her boyfriend, who was driving, was relatively unhurt considering he wasn’t wearing a seatbelt and was ejected before the final impact.

Yea, degloving isn’t pretty. Got to see a lot of that in the AF. Pretty much any safety briefing had at least one photo in it. Lot of moving parts and things to get a ring caught on around aircraft. Mine has lived on a ball chain around my neck for the last 13 years.

Saw a guy in high school get his finger get degloved from his class ring.
Doing pull-ups in a bathroom stall when another guy grabbed him around the waist and pulled him down.

Oh ya!
I have met several people that can’t hitch hike any more.

Some of those stories are pretty gruesome. I convinced wifey to be ok with silicone bands. Thankfully, she’s not big on fancy spendy jewelry. On the other hand, she is well aware of the price difference and will exact her pound of flesh, so to speak.

My wife is not a fan of diamonds,

Yea, Shaneh doesn’t like diamonds either. Emerald on her wedding band.

I can still count to 10. Just not like most people do. 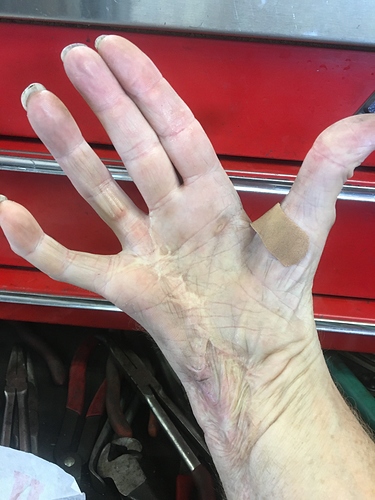 Oh damn!
can you still make a fist?