How to set zero point in repetier?

what’s the best way to set the zero point for repetier?

currently i jog the gantry to where i want to start , I hit disconnect, and then reconnect…

Yep, it’s in the Predefined script buttons , which you can parameter with the G92 command https://www.repetier.com/documentation/repetier-host/rhmanual-control/

Thank you I will look into that!

Yep, it’s in the Predefined script buttons , which you can parameter with the G92 command https://www.repetier.com/documentation/repetier-host/rhmanual-control/

I’ve tried setting up a macro as described above, but have run into difficulty. I move the spindle to an arbitrary point, and hit the G92 X0 Y0 Z0 macro button. The location readout does not change. If I hit the Home All button, the spindle moves off to negative X until it hits the rails. If I move the head to the middle, Disconnect, then turn it back on, the location readout says zeros. Hit home, and it zooms off again in neg. X.

Repetier host doesn’t trust marlin’s coordinate system, and it doesn’t notice if you send G92. So you also have to send @isathome, which gets intercepted by RH, and resets the RH coordinates. It is a goofy “feature” in RH.

Well, that code sorta helped… I can watch the location number go to zero. Still the same behavior when I hit any of the Home buttons, it zooms off in the minus direction. Getting those error codes, as well. 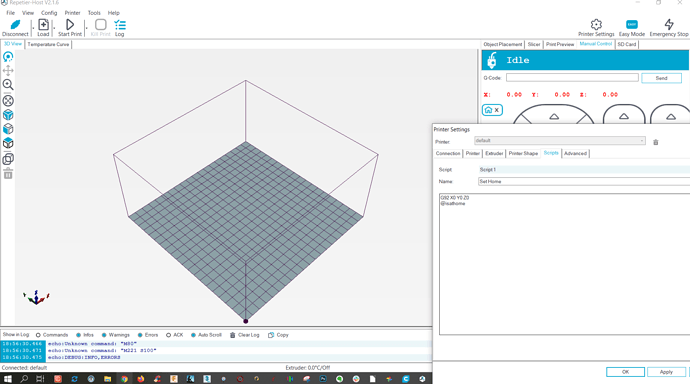 There are two types of zero. There is work zero and machine zero. G54, G55 etc sets which work zero you are working with. G92 sets the work offsets (work zero).

G28 (or homing) is a CNC routine to determine where the machine zero is. You need mechanical switches that activate and let the machine know it has reached the corner of the machine space.

If you want the machine to go back to your work zero, use G0 x0 y0

Thank you for setting me on the path to righteousness! I think that I need to set up a macro in Repetier that lifts the bit, then goes back to Work Zero, then drops the bit back to Z0. I’ll give it a try today.

I came up with a 3D printed locator for Work Zero that is performing nicely. I’m able to reliably set Zero, even through tool changes. Check it out: CNC Work Zero Locator

I tried it and it doesn’t stick. Repetier will not zero out any of the axis.

You need to provide more information about exactly what steps you are taking. You need to execute a G92 X0 Y0 Z0 when in the pocket then do it again after dropping the bit the 30mm.