So I want to run this by people to see if there is a good reason not to do this.

Rigidity is a big part of all kinds of mechanical systems. Of course the CNC machine, but also things like the handling of a car. There’s a trick that many racers use for street vehicles which has large measureable improvements in a car frame’s rigidity.

Basically take spray foam insulation, and fill the frame rails (But not overfill!) with foam. The foam itself isn’t very strong, but applied over the area of the inside of the frame rails, it has a marked effect on the ability of the rails to flex under strain. The filled steel has much less flex to it, which has a desireable effect on the car’s handling.

So… I want my MPCNC rails and gantry to be stiffer, but not much heavier. If a few ounces of spray foam can make the gantry rails stiffer, would that be worth the downsides?

I have some leftover 1" tube from my MPCNC cuts, which I think are long enough to serve as rails for a LowRider2 at 49" of X. If nobody has a compelling reason not to do it, I may set up an experiment to see if I can get some quantifiable data for stiffness. My experiment would be to use a good straightedge, say my 3’ journeyman level to measure deflection of the 1" steel tube when suspended across a 4’ gap, and supporting a weight, say 2kg. This is more than the strain that carrying a router should have, as that is typically split across 2 rails, but ought to give me measureable deflection.

The main downside that I can see is that people often run wiring harnesses through the gantry rails. Once the foam is added, the wires will not be able to be easily removed. I believe that if I do this, I will run enough wire through the tube before I put the foam in for a LowRider2 gantry, and terminate it in such a way as to be able to plug in motors and endstops, and never need to replace the wire running through the tube.

Anyone have a compelling reason why this is a bad idea?

You know, I was just thinking about this (spray foam specifically) today watching my long axis bounce back and forth, and remembered the concrete filled tube thread.
Lots of ideas have been proposed from concrete to epoxy, wood dowels to 3d printed trusses. The only thing they all have in common is that they don’t get tested.
If you have the stuff handy, an actual experiment like you propose would be great! Worst case, you should be able to recover the tube by melting the foam out with a solvent.
Tldr: yes please!

You could add a thin plastic pipe or cable hose inside the steel pipe (like it’s done in concrete walls). So, you will be able to access the wires when needed.

Or just get some of those gx/aviation connectors and make caps for the pipe that they go into on the ends. Then you don’t have to worry about cable in the tube after that, it itself is effectively a cable sleeve.

I suspect the difference will be too small to measure.

For an empty soda can or a foam-filled soda can I would easily expect a big difference if you were crushing it to the failure point. But we are not stressing to failure and the tubes are nowhere near buckling.

I’m a bit surprised that cars would fill the tubular frames with foam or that it would be stiffer. I’m having trouble finding information via google. Can you provide some links where foam is making a large difference in a car’s stiffness?

@jamiek I know it’ something the guys in the local auto-x club have tried and tested. I remember an old magazine article. Google says it was Sport Compact Car, and a 300ZX, but the article is too old and all the links are dead. New cars are just built that way, because it’s also lightweight noise dampening. Now all I can find is moldy posts talking about the article and a bunch of guys saying that it will trap water. The magazine article basically showed that they jacked up one corner of the car and measured the frame sag before and after, and there was a marked decrease in the amount of sag after. I do not remember specific measurements but it was way more than I thought plausible. The analog though is that thread is not very strong, but one strand of thread used to sew 2 pieces of fabric together can easily support a great deal of weight.

As for the tubes buckling… If we weren’t worried about the tubes bending, why would we recommend mid-beam supports for the rails? Those are recommended for the Y axis length that I’m using. For a full-sheet LowRider2, the beams are even longer, but no mid-beam support is possible. A quick check of my Y rails shows that I am able to temporarily flex it by 2-3mm easily with finger pressure in the center (Stand it against the wall with the base against the baseboards, and press at the center of the bar, I can see movement with it getting closer to the wall.)

Anyway, the experiment should be inexpensive enough to run. I’ve added a can of closed cell foam to my Amazon cart. It’s an add-on item, so I’ll bring it in whenever I make my next Amazon order, and I’ll experiment. I have 2 lengths of 1" .065 wall steel. I’ll clean out the insides, and run some wires through them. If this is supposed to be for a LowRider2, I’ll run 10 wires through for Y and Z motors plus 2 for an endstop. I have several spools of 18 and 22 gauge wire.

Maybe it will only make a big mess with the foam and do nothing to help, but if it does help, even a small amount less flex in those tubes will be a big improvement in the overall accuracy of the machine. A can of that foam is less than $10, and there’s enough there that I can probably fix the draft around the attic window before winter sets in, too. (Actually, I’ll do that first.)

To clarify the point in buckling, its certainly true that the tubes deflect and this is worth trying to reduce. Buckling is a different phenomenon, like how bending a tube of paper causes it to kink and flatten in spots. That is quite different from what happens with our steel tubes.

How will you get the foam into the middle? You need a 2.5’ long nozzle.

I had thought about that. No drilling, that would definitely cost rigidity. Fortunately all I need is a little length of PVC hose to put over the nozzle. The can has enough pressure to go through a few feet of 10mm hose.

The F150 used to fill the cab frame with foam. Not for stiffness, it was for sound deadening. Really pissed off the aftermarket stereo guys.

Former high-end audio engineer and installer here… I used to work for an audio company that did everything from commercial theaters to cars, with specialty work for high-dollar home theater systems (did a 180,000 dollar theater system in 99 in a home in Savannah GA as an example).

As @barry99705 stated, it’s not for rigidity/stiffness, it’s for sound dampening and harmonics. The foam’s affect on rigidity will be so negligible to not be noticeable. It will help eliminate harmonics, but again, to a negligible extent with the size of the machine.

Well it also depends on the geometry. A wing thats fiberglass outside and foam inside will be different than a hollow fiberglass wing, and I could believe a double shell anchored here and there could be significantly stiffer with foam between the shells.

Now having said that, for the geometry of a steel tube I find it implausible that foam would help…

It’s easy enought to test so just do a quick test and you’ll know for sure.

Take a bit of tube, put it in a vise, suspend a weight to it and measure deflection.
Then pour foam into the tube, measure again and see if it changes.

My guess would be that it doesn’t worth the hassle, unless maybe if your tubes are made from paper thin metal.
As stated earlier, main downside will be cable management, basically you’ll have a hard time making any change to your machine later if it involves adding a wire into one of the tubes. Other than that I see no downside, just maybe lots of work for very little reward.

It’ll probably be cheaper and faster to get some thicker tubes in the first place.
Anyway, feel free to try, maybe it’ll surprize us, who knows!

Probably not, but try it!

I would expect (without having done the test, or seen any results from gear heads) that it would dampen vibrations, but that it wouldn’t affect the stiffness in the engineering sense. I would be surprised (and I would love to see it) if it deflected any less under load. But I wouldn’t be as surprised if you hit it with a hammer, that it would stop vibrating sooner.

FWIW, I have professional training as a software, electrical, and physics engineer, not mechanical. So I am an amateur when it comes to speculating this.

Well, I intend to try.

I was looking to see if there was a good reason not to, and what I got was reasons it wouldn’t work. I’m an empirical kind of guy with stuff like this. I get why it might and might not work, so what’s left is “try it and see.”

So my understanding is that the foam bonding to the steel is like thread. Each point of contact is a weak bond from one spot to another, but because they contact a lot of surface area, they serve to support the surrounding structure, like many stitches can support a lot of weight.

I also get that foam isn’t very strong compared to steel, and that a tube is already a very strong structure. Lots of reason to suspect that it will do no good… It’s all speculation until experimentation, and even then, there are a lot of variables, different kinds of foam, how well I can dispense the correct amount to fill the tube, how it bonds to the steel… The list goes on.

I will try to pull a rag through the tube to get the inside as clean as possible to reduce that variable.

In terms of damping vibration, that may also be of benefit, though I don’t know how I’d go about measuring it

Spray foam can be used to set utility poles and lift/repair sunken concrete slabs, it may surprise us.

I’m an empirical kind of guy with stuff like this.

That can be a good thing. As expressed in the old saying:

In theory, theory and practice are the same. In practice, sometimes they’re not.

What about printing alignment spacers for both ends and adding a second, smaller steel tube between the foam and outer tube? You keep the wiring channel open that way but the foam should stabilize the position of both tubes.

Just a thought…I’m no engineer.

That’s been done (with epoxy, not foam) and it made a big difference: 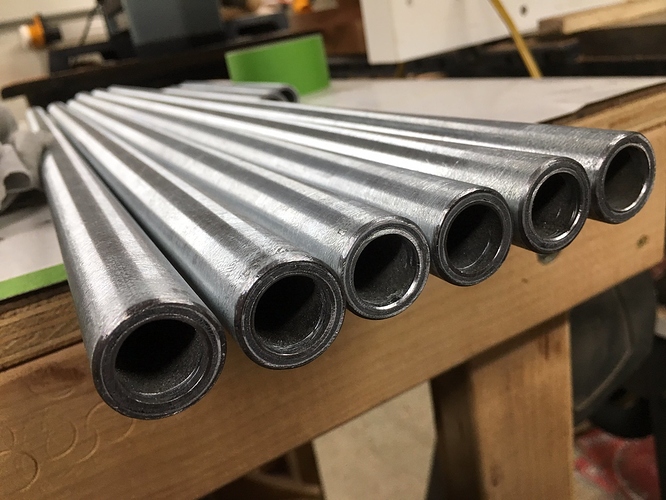