It’s fall, and I offhandedly asked my wife what those pumpkin spice candles that appear at this time of year cost. Turns out they’re like, custom picture frame expensive for what they are. So I started looking at wax, oils, etc. and then began thinking about containers. We have a lot of stone wall on our property (I think mostly bluestone and some sedimentary rocks like shale - it’s upstate NY), and I wondered if I could use my Lowrider to carve out votive size or larger holes in some of those stones for candles. I think it’s unlikely that anyone has tried this, but I’m looking for educated guesses on whether it might be possible, and if so with what kinds of endmills.

There is an estlcam video where Christian cuts out stone. It uses a special bit, and a ton of water. I assume it’s a lot more like grinding than milling. It ends up pretty nice. I am guessing it will be enough of a PITA that it would make sense to buy a softer rock than try to mill a specific rock. But I’m not sure.

Ive cut ice stone on a production cnc but not on the lowrider. I did have to use tons of water, as you are essentially grinding the stone into dust while introducing heat as well which will gum up the bit. The water acts as a lubricant and makes it much easier on the bit. But you essentially have to be there the whole time following the bit around with a water sprayer.

I also had to make some kind of waterproof tray to keep all the water from going into my mdf spoilboard. In addition, I had to sacrifice 2 collets/bit holders as the water got up into the collect/holder and rusted the threads on the nut.

You do need some specific bits to cut stone, I used these guys
http://www.2linc.com/endmills_armor_mill.htm

Lastly, feeds and speeds are really gonna be your worst enemy here. I had to go super slow on the spindle speed, I don’t know if our dewalt router can go as low as 6k or something but that’s what I believe is the recommended speed for the bit.

Good luck, let me know if you need anymore info. It can be done , it’s just not at all fun…

I did some stone sculpture by hand ages ago and I still have some alabaster left over. Limestone is super plentiful and cheap here in Texas and I was thinking I would practice with that. It was part of the motivation for mounting the angle grinder on the CNC but I wouldn’t say I’m anywhere close to attempting it. I’m thinking I need a 4th axis to get any interesting shapes.

Soft stone should not be too big a deal as long as you can keep the dust under control. I would think a grinding style tool should work alright but I don’t know what to expect from a cutting style tool. In the case of limestone, some pieces are like pure chalk, but other pieces are like chalk mixed with silica sand, and in that case I would think the tool life would be shorter.

Alabaster is such a beautiful rock it is almost cheating: you can make a beautiful finished product even if the shape of the sculpture is not that great. Which therefore makes it appealing to me.

4th axis and flood coolant and stone are on the horizon for me but probably not going to be this year.

Thanks, guys. You’ve given me some direction in case I decide to pursue this. I think a washing machine leak tray would probably suffice for catching the water. I am a bit worried about ruining the router with splashback, though. And I’d definitely need to look into getting a respirator. We’ll see…

Found the video. Interesting. He did the work submerged in water. I’d probably want to make a plastic shield to protect the router sled and router.

This is the one I was thinking of: 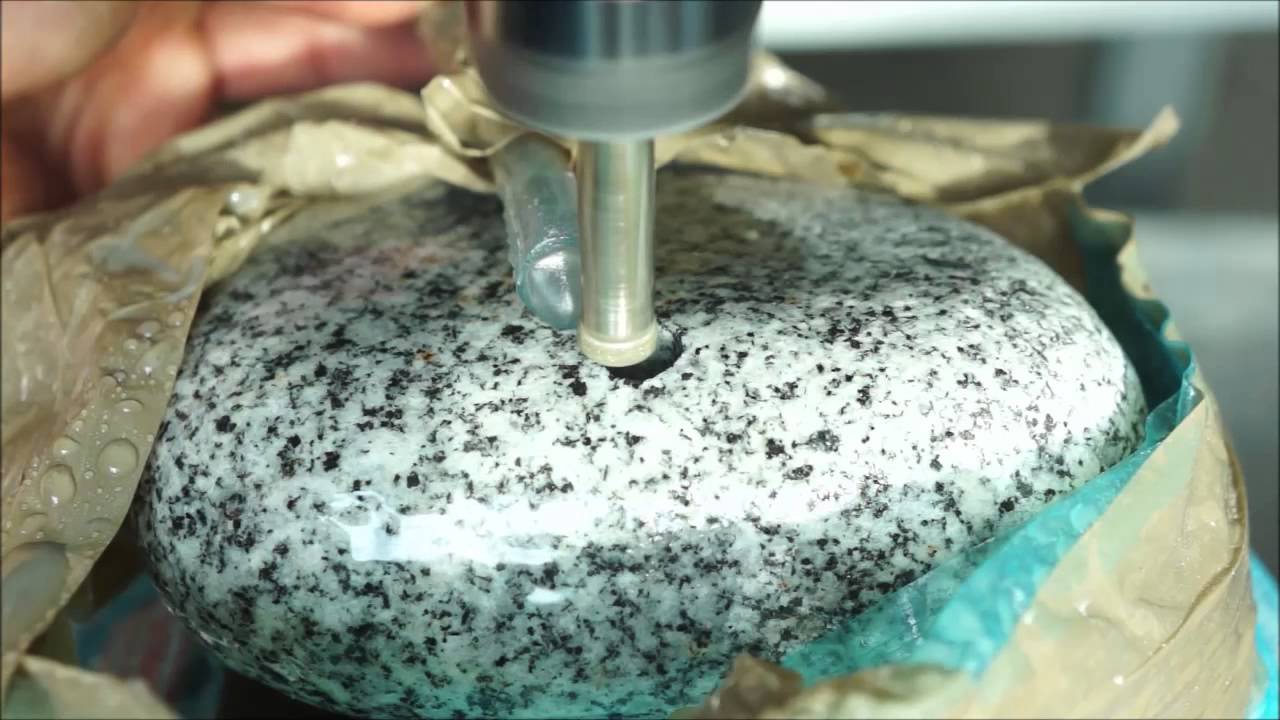 Thanks! I’ll check those out later.

I see that the second video here shows a tool that only has diamond(?) on the very tip, whereas Christian was using a tool that had about 9mm of diamond cutting depth. Definitely makes for different CAM strategies… The pseudo-mortising seems like it might make for slightly more accurate cuts, as it’s not dealing with the horizontal forces trying to grind away while moving. I can’t view the other two videos at the moment, do they go back and plunge with 1/2 dia offsets to hog out even more material? Do they go back and run very shallow slot cuts to clean up the carve?

I find it encouraging that these don’t appear to throw water all over the place as much as I had feared. Maybe it is possible to adequately protect the MDF after all, rather than needing to rebuild the machine on a section of quartz countertop. Although that would still be awesome in its own way…

Thought I’d report back for completeness’ sake. It’s definitely possible. This is a piece of local sedimentary rock (mudstone?) from a stone wall. I used a diamond grinding bit and Christian’s feeds and speeds from the video linked above because I didn’t have any better idea where to start. The massive DOC (~8 mm) was a little intimidating, but it makes sense when you see how the spiral drilling operation works.

The workpiece was hot glued to the bottom of a shallow, aluminum tray like you’d get with baked goods in a grocery store. I screwed the opposite, short edges of the tray to a couple of scrap pieces of wood and secured those in turn to the spoil board.

1.) The Lowrider has no problem with this task at all.

2.) Do not be stingy with water. I didn’t do mine submerged like Christian did, but opted to use a spray bottle and shoot a stream of water under the router mounting plate and into the hole. At one point, I waited a bit too long and the bit turned red hot in an instant. Once the hole was deep enough to hold water, I was able to slow down a bit on the spraying. Overall, it didn’t require a ton of water, just judicious application.

3.) Overall, things stayed relatively dry. When I pulled the router, the collet and base were fine. There was enough spray on the bottom of the mounting plate that some drips formed, but it wasn’t excessive. If I do this again, though, I will probably make a plastic cover for the mounting plate with a hole for the tool shaft. 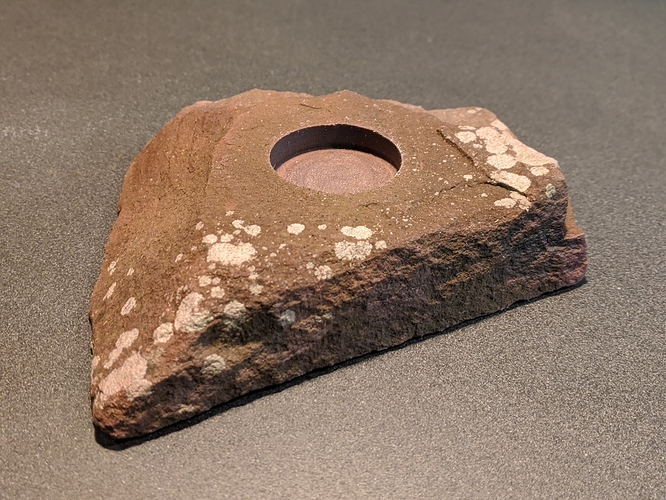 First stone in the gallery! 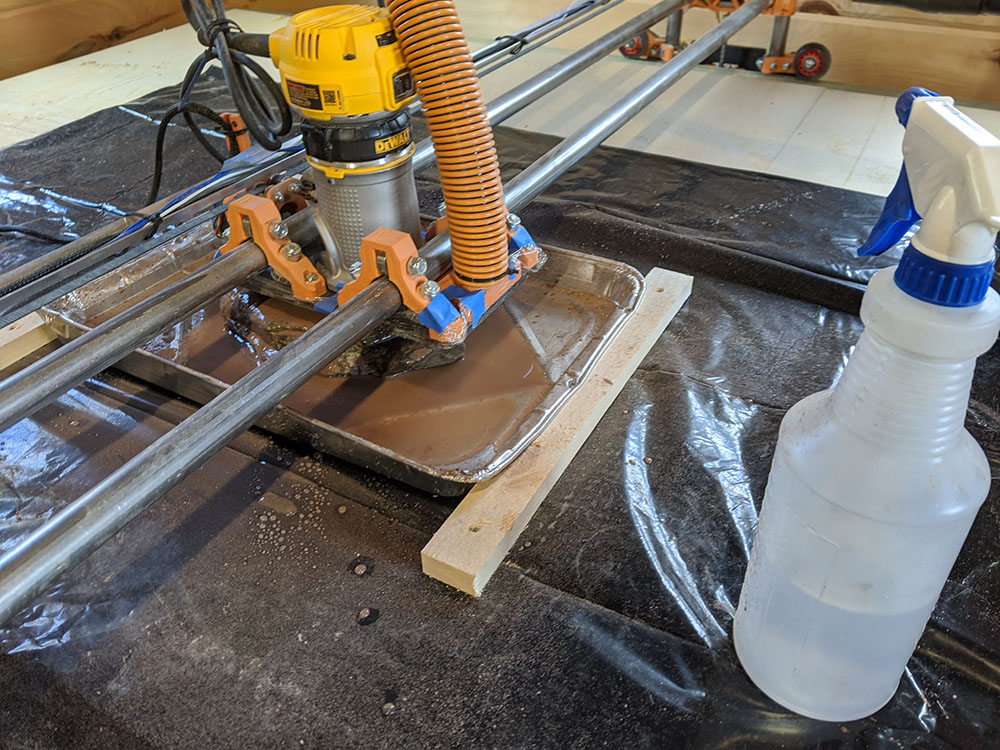 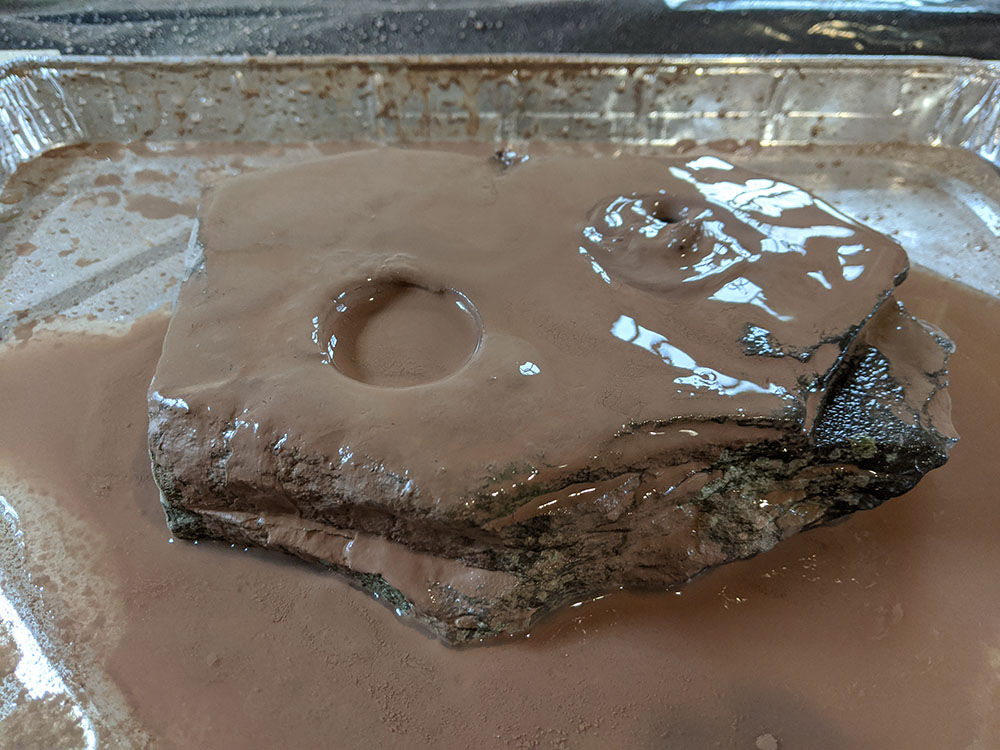 5.) While the Lowrider handled it like a champ, these particular bits are only good for one, tea-light-candle-sized hole in soft rock each. 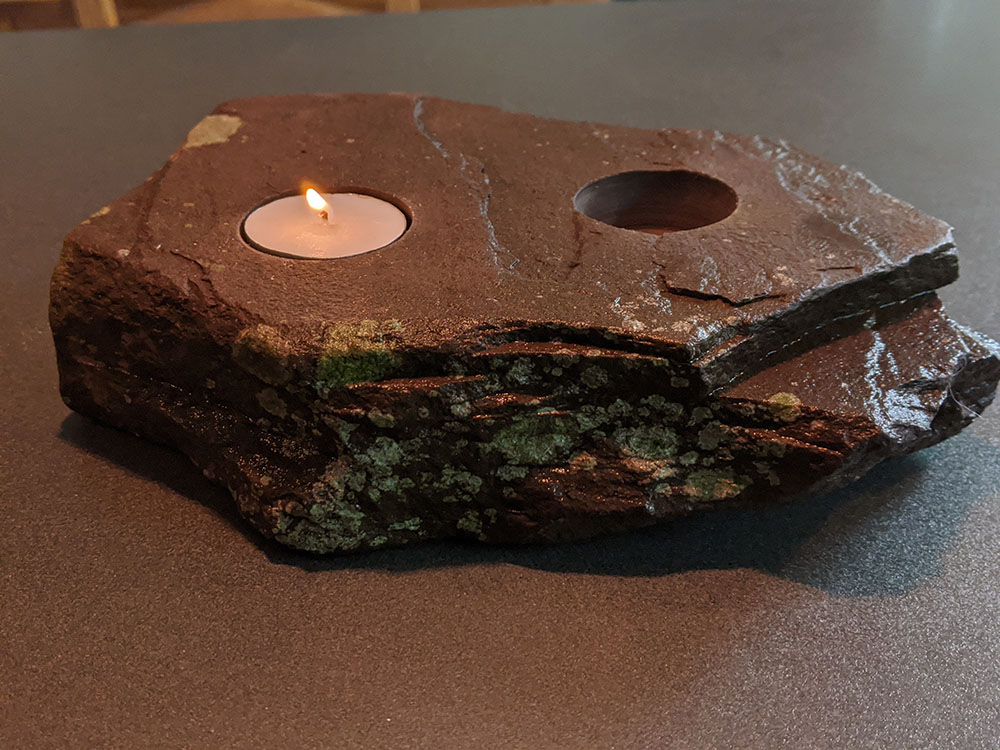 I doubt I’ll be doing this again, but it’s nice to know I can. And if I do, I’ll be looking for better grinding bits.

Next time I’m at our countertop client I’ll see what they use. They can cut inch thick granite countertops in one pass.

That would be interesting to know!

Countertop installers often use diamond or carbide bore hole saws. Quality and styles vary a lot.
I have used them to make beads and round cab blanks for jewelry.

Your idea of a bit splash guard sounds easy to make with a piece of left over milk jug silicone glued on the bit shaft. (I am decent at the dirt cheap solutions)