So i’m sitting here in my lair wondering how I can squeeze any more anything out of my printers and I had a thought…Would there be any realistic gains by adding a second stepper to the X and Y axes of the printers? I have an MP3DP and a Piper1. I asked in another thread about beefier (wow, that work looks weird) steppers to swing the weight of that MK8 extruder and my heavy 1/2"x200mmx200mm plus heater and glass bed. But then I’m looking at it and wondered if I print the X and Y motor mounts mirrored and put them opposite the normal ones, if I could get similar results from two less torquey motors on each axis. Also I guess, not being any kind of engineer, is there is some inherent torsional something-or-other that makes this a bad idea?

I’ve kicked this idea around for a delta printer but haven’t made it past the ‘sketch on napkin’ stage. Aside from the added torque you effectively halve the length (and associated springiness) of your belts since the ‘return’ side of the belt is isolated by the two driven pulleys.

One additional complication might be belt tensioning. Not only does the belt need to be tight when the machine is off, but the two pulleys need to be an even number of rotor teeth apart. Otherwise when you energize the steppers they will pull one side of the belt tighter and leave the other side looser (and possibly give you trouble by trading skipped steps back and forth with each other. My plan for the delta was to energize the steppers, use an idler to remove slack on the backside, and use a belt tensioner in the carriage to tighten up the front side but there are other ways to go about it as well.

If you give this a try, please report back. I didn’t find any good examples of this being done elsewhere so I’d love to see the results of any experiments you may do.

Do you skip steps when you push it now?

Do you have the current reasonably maxed out? Are you running 24V? Do you have room for larger steppers (90ozin guys)?

I would try all of these first, because they are easier. But if you’ve reached the end of these, then another motor might make sense. The dual motors on the MPCNC are really for alignment, but they do make it stronger. I hope you’re not needing as much force from your printer as the router.

2 vs 1 typically only applies to needing more torque when it comes to stepper motors.

If your current stepper has plenty of torque, then you won’t pick up any speed by switching to two.

@frosty - Yeah well, I was up till 2 and it didn’t go well. Lots of swearing. Making moves manually worked fine, but as soon as I tried to run a print job it seemed like exactly what you mentioned about them skip-fighting each other by not being quite in sync. More testing is needed and I will try energizing the motors before tensioning the belt.

@jeffeb3 - I never did get around to buying the bigger motors or converting to 24v. I suppose that would probably be the best course of action. I bought a dozen 39oz-in steppers that I’m using for my MP3DP, Piper, and ZenXY, so I have 2 extras laying around giving me dirty looks. Now I also have a couple random ones I pulled from an old commercial laser printer so maybe I’ll just build another printer.

I usually run everything at 50mm/sec 800mm/sec acceleration and all is well. My motors stay pretty warm so I think I’m at my limit for current.

@niget2002 - Yeah, I knew this wouldn’t directly give me more speed but rather that by increasing over-all torque per axis I could then increase the feed rates with out losing steps.

So last night I was trying to get this working by taking a page from the MPCNC playbook and wiring the motors in series. I ended up having a bunch of problems with skipping. Well tonight, with a clearer head, I tried it without the belt even attached and they are just a mess. Same skipping and studdering I thought was being caused by tension or not being synced. Apparently the motors I have don’t play nice wired in series. Once I wired them parallel, everything evened out nicely. Here’s some pics. 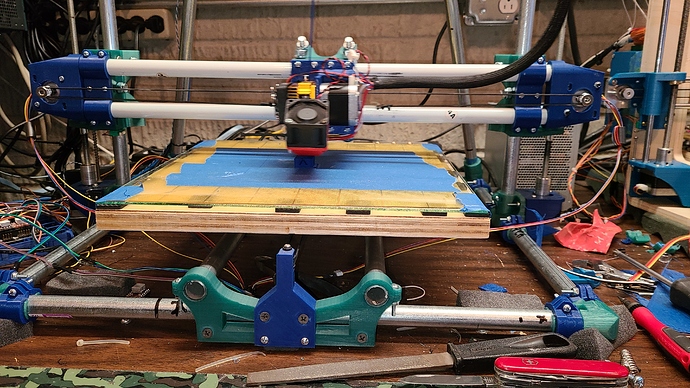 I chose the Piper as my test platform because it was a lot easier to add the second motor. 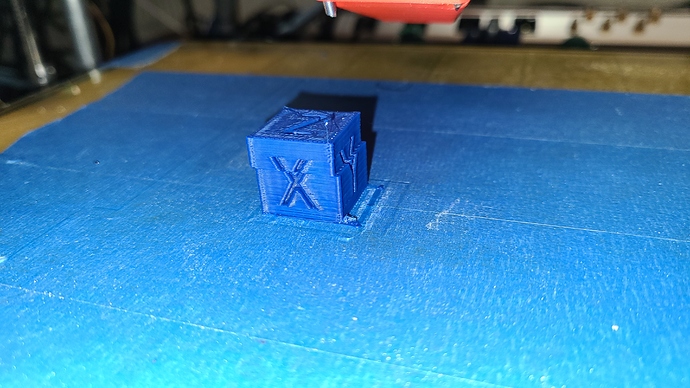 Had two skips. First on layer 2, but I think this might have been a physical collision because my starting Z-height isn’t at it’s best. second one was about 60% up. 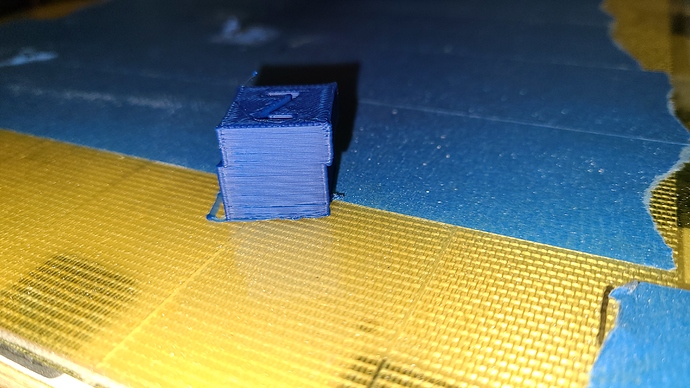 So this was dual X motors, wire parallel, at 150mm/sec feed rate, 1000mm/sec acceleration, 50% infill. I increased the flow rate up 20%, I dunno, I figured it needed a little help keeping up? Print took about 18 minutes.

Interesting results. What is the coil resistance on your motors? If they are higher resistance it could be that you are running out of voltage headroom when running in series.

Here is the data sheet on the motors. (screen shot of pdf)

Have the Vref set around 0.280v, which if my math is right is quite a bit higher than the recommended. Funny enough, the motors and drivers are cool as cucumbers. Even at idle.

Here’s another cube at the same settings except I turned the flow rate back to 100%, and I re-calibrated my starting Z height with new tape. 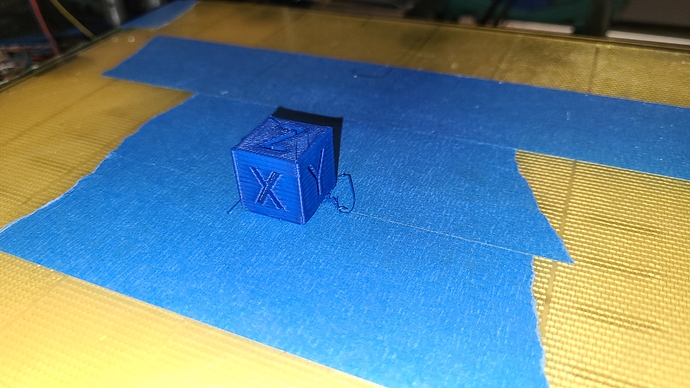 Then I tried a more involved shape, bigger, and turned the feed rate up to 160mm/sec. It’s a hot mess, but notice its only skipping on the Y axis. (and my bed isn’t very level) 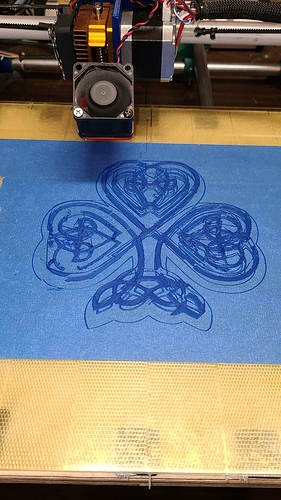 I took a gamble when I bought these motors. I bought them on Ebay and the seller didn’t have the model number in the listing, but they were NEMA 17 Minebea motors and they were 12 for $40.

Those are pretty tiny motors.

Remember that if you wire them in parallel, you should double the current.

The steppers in the store are probably a little overkill for the MP3DP…Ryan uses the same ones in the MPCNC and Lowrider, but with only 2% of the torque, I’d guess yours might be a bit too weak…

The reason series wiring didn’t work is because the voltage required for the motor to reach their rated current is 10.2V so wiring two in series would require over 20V from the drivers (and even more when moving) to keep the steppers locked together. Parallel wiring is the right approach for these motors, and as Jeffe said be sure to double your current setting on the drivers.

OK. Thanks guys for all the insight. I should be more cogniscent of all of the specs when jumping into stuff like this, because I tend to take a more leap-before-looking approach to most things. Looks like I’m pretty close to the mark with the .280 Vref then, assuming (half amps minus 10%)x2 for the motors in parallel. Definently going to print that other Y mount tonight and continue testing. Again, thanks for all the help.

Eh, if you have all the parts on-hand (and you aren’t risking life/limb) just try it out and see what happens. If it doesn’t work investigate+iterate.

I think I have a stash of very similar motors (10V rated current) so I’m very interested to see how this turns out.

If they aren’t warming up, I would consider increasing the current anyway.

Printing that mount now. Turned the Vref up to 0.300-ish with the motors energized. It’s about 20% into the print and the motors are just a little warm. 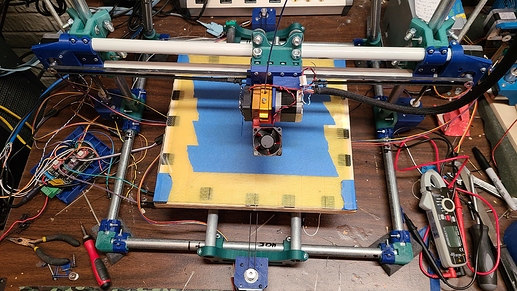 Currently printing mirrored XZ-motor mount for the MP3DP. I figured I’d go with a known part to judge speed and accuracy. 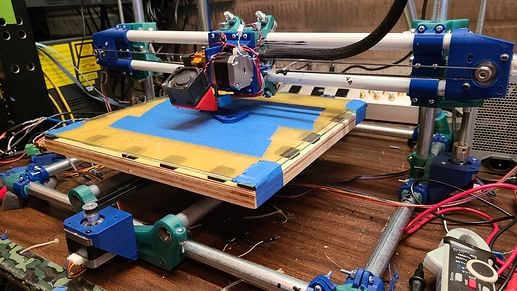 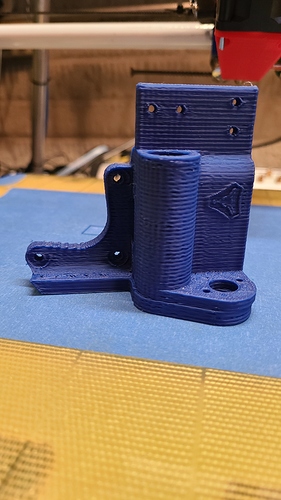 It ain’t pretty, but its within <.5mm in all dimensions according to my hyper-accurate Harbor Freight caliper. This is based on the one currently on my MP3DP. Well, the motor mounting holes line up anyway. And it did skip once. 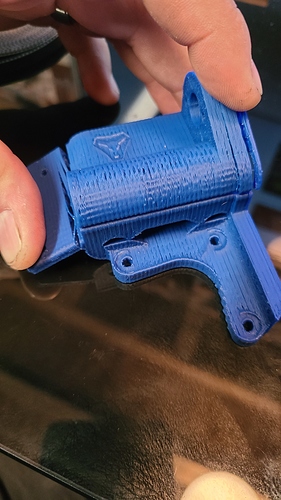 And the layers didn’t bond very well. But it only took an hour and a half to print.

This rig is pretty rickiddy anyway. Lots of slop in lots of places at normal speeds. I’ll print some nice mirror pieces on the MP3DP for itself and do a proper tear-down and rebuild with dual motors. I finally ordered some 84oz/in motors to see where those get me too.

More heat, less speed, maybe some more flow. And figure out what’s wrong with your Z screws. If you are getting swelling in the corners look at linear advance, too.

160mm/s is insanely fast for most printers. Cut it in half (same accelerations) and see what that looks like. If you still have adhesion issue look at extrusion multipliers and nozzle temp.