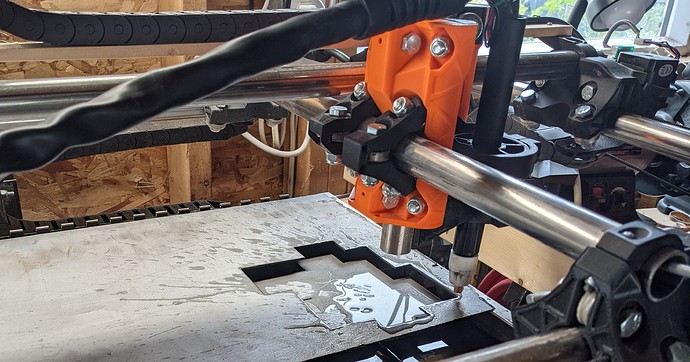 Hi everyone, like a lot of folks I thought a plasma cutter might be fun. But first things first let’s see some hot plasma and sparks: My initial motivation was that sheet metal parts are “quick” and “easy”. Also, a cheap plasma cutter is like 250$CAD. If the EMI blows everything up, at least I’ll still have a plasma cutter. This was enough reasoning to begin 4 months of anguish.

I think most people are aware that there’s a lot of EMI with a plasma cutter. What isn’t explained is that EMI is a problem that is very difficult to track down and that you will go paranoid and mad trying to reduce it. I kept a log of all the cut I tried and it is in the 40s of attempts before I got anything to cut.

What did eventually result in cuts working was:
Physical Shielding:

What I considered doing but luckily it started working before I had to :

Hopefully this inspires some more people do mostly plasma CNC setups. Plasma is fun and cool!

Man that’s some great video! I’ll have to wait until my new shop gets built, but I’m headed this way, too.

Sounds like you missed dui’s thread. He went to great lengths to describe what a pita it is to track down and shield everything from EMI. If anyone else is considering this, please go find it.

Bet it feels pretty good to cut steel parts, though, now that you’re there.