I’m the same guy who had to print one of the pieces of the MPCNC split in half, so I first wanted to say that everything came together well enough to get it plotting with a pen.

I haven’t even fully bolted it to the table yet, and chances are there are a few bolts that could use some additional tightening. That said, I wanted to share my results, first to show that the darn thing can run with a split and glued XYZ and partly to ask some questions regarding calibration. For reference, this is set up with a 24"x15"x6" working area and your own most recent pen mount.

In the image, you can see there’s significant wobble to the lines. Again, presumably bolting down all four legs and snugging up a few more bolts will even those out. But in the event I still see issues like that after final installation, what sort of things would cause wobbles like that? Does poorly tensioning the belts produce artifacts like those? Too much tension on the conduit? Too little? Is there a standard checklist of reducing wiggly lines anywhere that I should be working my way through once this is set up? 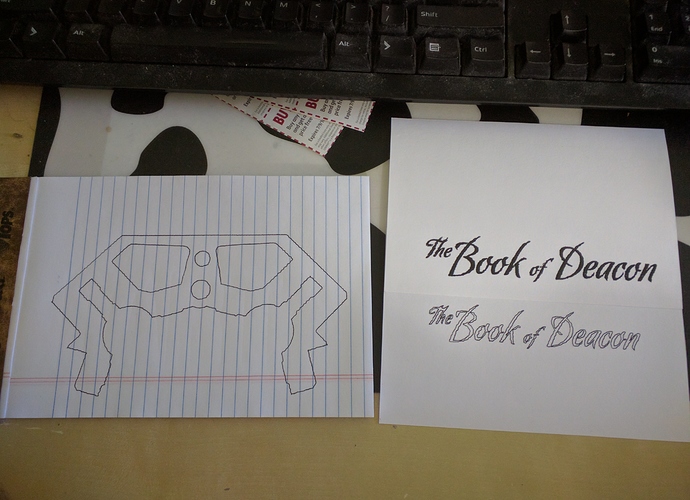 What pen mount are you using?

Bolting it down will help considerably.

I figured the bolting down would make a big difference. Frankly that I’ve powered it up at all is an exercise in impatience. I just figured I’d share the image and ask, just in case it was the sort of thing you’d look at and go, "Oh, no, wobbling like that is because you you forgot to [insert random adjustment that I would have spent two weeks trying to figure out.]

Once the new table is built and this thing is in its permanent home, we’ll see how it behaves. Thanks again!

I ran mine with a pen not bolted down and saw similar results but I mounted it to the table and put the dremel on there and it ran with no issue.

I think you need to get it on the table and while you are doing that make sure it’s square and level. Anything you mess with now will probably change when you move it anyway.

Yeah, I figured any finagling now would be wasted, but it’s going to be a while before I can get the 2x4s and plywood to build the new table for this thing, so I got a little ahead of myself. Incidentally, I clamped it down to the temporary table and gave all the belt tension zip ties a few extra clicks and things drastically improved. Here’s a first print and one after the clamps and tension. 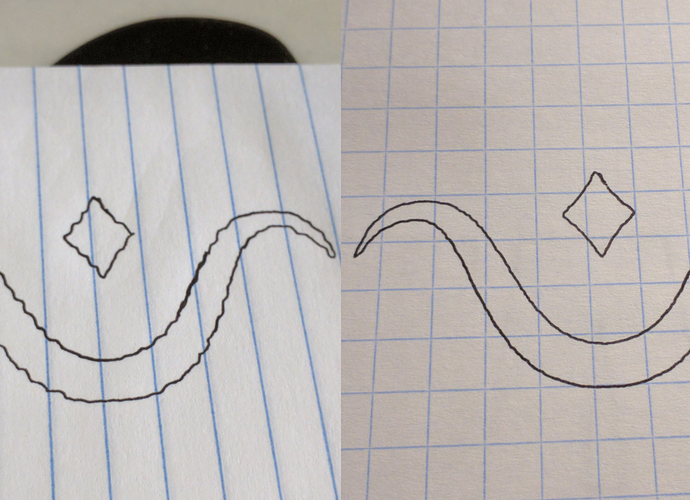 Okay, I’ve got it bolted down. Here’s a test print that’s almost entirely curves and thus a worst case scenario for wobbles (I would imagine). Is there any reasonable way to determine where the wobbles are introduced? Rollers too tight, vertical stability problems, not enough belt tension, etc? Also, with a machine of my dimensions (~ 24x14x6 now that it’s screwed down), what’s a reasonable maximum stability?

Also, though I’m pretty sure I tuned it out, initially I was seeing diagonal measurements about an eighth of an inch off. Would that manifest as merely “parallelograms” or are there other symptoms.

I suppose I should ask (or should have earlier) is there a “calibration master post” or something? 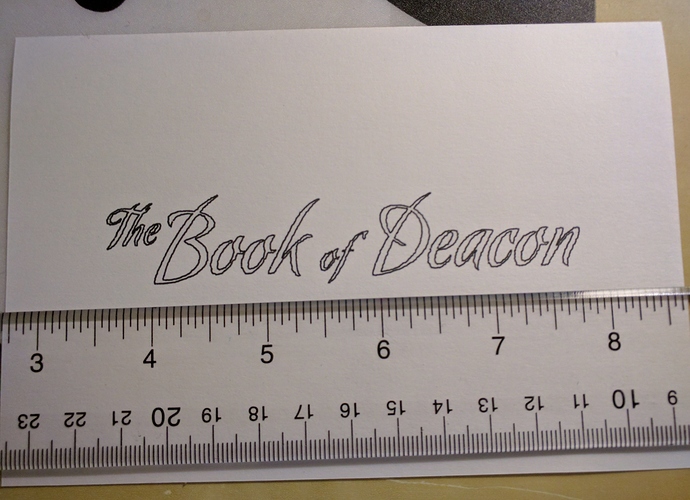 So that could actually be the texture of your table, paper, or too much pressure on the pen. I’m not convinced it’s the machine.

As for your other calibration. Each corner is at the same height and the diagonals are as close as you can get them? 1/8" is kinda far off, but yeah parallelograms and ovals. But if it’s close enough for you don’t sweat it, Some people get a little carried away with those things.

I rechecked the diagonals and sure enough, now that the gantry is on, it’s pretty well dead on. (Or at least not measurably greater than a sixteenth of an inch ot of square). I used an old book, which was just about the right height, to set the height at the corners. I might cut a spacer on the table saw to be a little less kludgey in a day or so. … I guess I could measure, too. One moment.

It’s entirely possible the paper and excess pressure are to blame for the wiggle waggles. We’ll see how it does once I strap the 3D printing head on, or the DeWalt. It could also be the table I built. It was made out of what I had laying around and the ply that makes up the surface wasn’t the flattest I’d ever seen. I screwed it down to the frame, but even so, I wouldn’t be surprised if it’s led to some minor twisting. I KNOW it isn’t quite planar to the gantry, because some of my tests end up with the pen drifting off the paper as it moves toward center. I suspect a new table for this thing is in my future. At the very least I’ll be rigging up a levelable print surface for the 3D print tests.

Thanks very much for answering my posts, by the way.

I’ve been running the printer quite a bit lately, and I already know I’m going to have to make a better table for it if I want it to be REALLY accurate, since I believe my cobbled together table has a minor twist in it, but in order to stress test the machine and just to see what sort of quality I can expect from a flawed setup, I’ve been printing replacements for some of the larger MPCNC parts. (Small stuff has been coming out great with the exception of some poorly optimized slicing on my part.)

However, again, in preparation of the “real” build, I was reading around for some common problems. You say in one of the other posts that you do a corner to corner check for square before each usage. Out of curiosity, what do you do if you find that it’s off square. I’m pretty sure I accidentally tweaked it when I was re-running the wires with nifty sleeving, so I suspect a re-squaring will be in order. (A single bearing on the left Y roller and a single bearing on the far X roller seems to have lost contact with the rail.)

Before I start a job I set all the rollers at equal distance with its partner from the nearest corner. I get cuts square enough that I can really measure a difference that way.