All, well the machine is really alive. I have to admit, really hard project; but neat as hell when it works.

I am looking for some cheap/inexpensive 1/4" shank end mills. 2/3/4 flute down cut, Ball Nose, etc. Sine I am new at this I do not want anything expensive. I currently have a set of assorted end mills from Amazon. They are 1/8" shank and I really want to use 1/4" for stiffness, etc.

I looked on Amazon and these are not as cheap as the 1/8" ones and was wondering if there was a super double secret place to get these. As I gand confidence I will step up to some Harvey or Amana mills.

Thanks in advance.
–BA

I highly suggest figuring things out with a single flute 1/8" upcut. That can do everything. Yes 1/4" can be faster but 1/8" is extremely forgiving and a ton cheaper. Just get a few of those and do some test cuts. Then spend on some cheap 1/4" then see if the expensive ones do you any favors.

Downcuts are a different beast and take some testing to get the feeds/speeds right. As are large bits on these machines.

If nothing else get at least one or two of my suggestion and go from there.

I am thinking that the 1/4" will add some stability.

A ball nose should only be used for 3d carving/sculpting, or a finishing inside radius.

A flat endmill can do things faster…A 1/4" is only faster if your machine is small/rigid enough. if not a 1/8" is by far faster and more accurate.

If that is not really clear have a look at my last few speed run videos on youtube. My small machine, fast cutting. I only moved up when I absolutely maxed out the 1/8". That is the only time you know you machine can handle more.

Based on the online bits that I have read, I think mine is pretty standard size. Cutting size is 24x24x6.
I went looking on YouTube for the videos, can you post a link?

So for you a 1/4" should work, and will be faster to clear pockets, but might be slower cutting slots. Takes some tests to know for sure.

Actually, the Z is 4". I just measured it, you are right 6" is way to much. I am using extra thick walled, I do not remember how thick, polished stainless steel 1" tube. With a dial indicator and my entire 210lb, it deflects about .001-.002. I am also using, the stronger steppers; 59Ncm at 2 amps. I am not running them that high.

All of the hardware is all 803 stainless. The bearings are the best 608-2RS I could find. The only issue that I am having is that the gantry itself has some movement in it. I have also had to shim the DW660 on one side to get it trammed and I am still working on this. The threaded rod is crap and has to much motion in it and is most likely the culprit. I would love to put a ball screw in it. The mounting table is 3/4 MDF torsion box on 2x6 legs with SS bolts holding it together. It is flat as possible. Due to shop size, I have it on casters that can hold 2200lbs and lock down with a vertical dial. The thing does not move.

I did print everything with the 70% you recommended, the core three times (OMG); with the graduated infill you suggested. It is really solid. I actually have an extra one if anyone wants it.

I tried as hard as I could to make this as rigid as I could. I learned alot. Spent way more than I should have, but I have been working on it for several years. False start on a burly and redid it with the Primo. I will not go into the electronics. I need to get my site updated with the current status/BOM/etc.

Per your suggestion; I will keep with the 1/8" for the moment, and then step up to 1/4" after gaining some experience.

Let me know your thoughts on the build; https://baprojectworkshop.com has some of it.

Also keep in mind that not all cheap bits are good. I used to be firmly in the camp “learn on cheapie so it doesn’t hurt so much when it breaks”.

Recently I saw someone getting trash cuts that instantly improved with a quality endmill. Also, I had some HQmasters that absolutely would not cut aluminum at any serious depth. Broke like 8 of them, blamed it on my machine not being able to go fast enough with rigidity to get the load right. Finally got the chance to chuck them into a steel and screw machine with big motors that can move and guess what? Still wouldn’t cut. The bottom is sharp enough, but not the flute edge.

I submit to you this : buy some cheapies (Hqmaster have treated me well in wood and plastic) but go ahead and get a nice one or two at the same time. Even if it’s just one. That way, if the program looks OK on the cheapie (no weird unexpected moves or feeds, and speed isn’t burning up the endmill) but the cut doesn’t look so great, you can safely chuck in the $$ and not worry about breaking it to compare the cut. Full disclosure, Jeffe suggested to me that cheap endmills cause more problems than they get credit for before I stopped to think about it.

For that matter, quality mills are also less likely break, in my experience. I just blasted one of the single flute kyoceras (the short one) that Ryan sells this weekend. I Talk these up all the time, and his price is competitive.

I’ve had those endmills get straight up STUCK in aluminum and the steppers skip but they didn’t break. Compare that to the 1.50 endmills and suddenly cheap isn’t so inexpensive.

But, if course this is just my opinion, and I keep proving that I’m not so smart, soooooo…

Great stuff, love the pic. I am expecting that this will be my future. Lots of broken bits. I am still working to tram things properly. Lots of little shims.

On the HQmaster ones, turns out this is what I have, would you share your feeds and speeds? If you are using Fusion, your tool library would be outstanding. Aluminum is in my future, I am working with wood for the moment. Actually not very much right now, I am really working on learning the CAM section of Fusion.

Thanks in advance.
–BA

I’ve had them burn up pretty quickly at anything over 20k rpms, so if you can control the speed, that’s good.
I load it up at minimum 0.001 chip/tooth to minimize burning. Go deeper before you go faster, but if your machine is good for, say, 1/2 inch DOC and your project only needs 1/4 inch, that’s a great time to try increasing the cpt.

I’ve had great success with HQmaster bits, but do also own so more pricier name-brand bits.
For example, this MDF and Aluminum LowRider plates were both cut using the same exact HQmaster 1/8" bit: 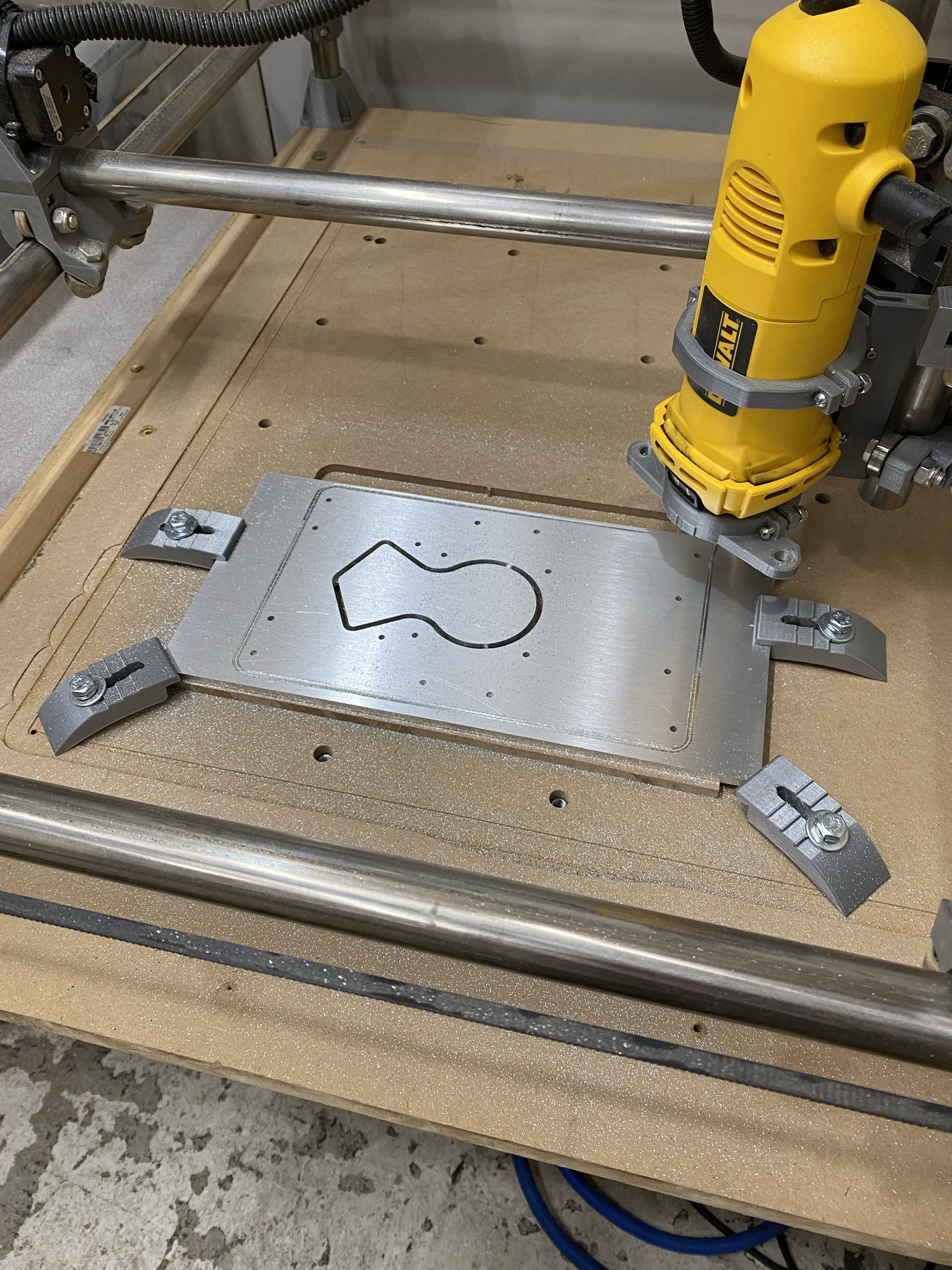 OK, I broke down and bought some 1/4 bits, 2 flute upcut and a 2 flute ball end mill. I am going to give it a shot. I am working on getting the router trammed. Close but not perfect. I downloaded and printed @vicious1 thingiverse testing thingy. 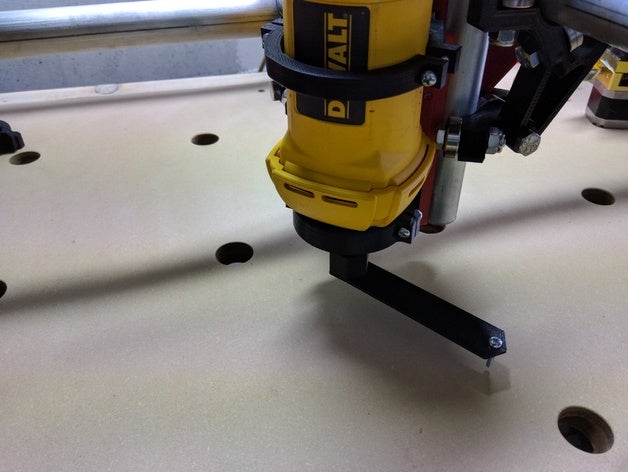 The machine works. Does a great job. Nice and stiff.

Was that the single flute on that aluminum?

Wow, now I have to ask if you recall the depth of cut. Those are exactly the ones I was fighting with in aluminum. I think they were OK at something like 0.005" or 0.010", but since my kyocera was happy at 0.040" slotting (and full depth trochoidal) I kept trying to go past that.

I opted to be safe and go real slow since I had never tried milling aluminum before. I’m also using the fixed-speed dewalt and the older model (less ridgid core) 525 MPCNC.

Overall the part came out great - next time I would try increasing speeds/feeds and add air to evacuate chips.

Cool, thanks. That jives with my experience then. I definitely wasn’t getting good results higher up the flute, but I don’t know if it is poor geometry, poor sharpness, or just a bad batch of endmills.
But then, I guess that’s kinda what this thread is about, right? FWIW, I DID manage to get some nice chips in a chunk of steel with them. Low stepover, higher feed, lowest speed I could get on my 611, full depth adaptive/trochoidal path. Who knows?