Do you have to calibrate your CNC like you do a 3d printer? I ask this question because I see a lot of feedback regarding skipping steps.

The V1 firmware has reasonable starting speeds and accelerations for the controllers that are most common on these forums. If you want to squeeze the last bit of performance out, or are using a non-standard controller, then you’ll need to work through a tuning process. Be aware that stepper motor torque drops off fast as velocity increases, so it’s easy to cross that line. If you do, just slow down a bit and things should move properly again.

Slight mechanical misalignments can also lead to just enough extra friction to cause lost steps. Failing to lube up lead screws is another common early contributor to that problem.

In terms of missed steps, as Tom writes, it is almost always a mechanical issue, or an issue of pushing the machine too hard…too fast, to deep a cut, etc. I’ll add to the mechanical possibilities that loose grub screws on the pully are a common reason for lost steps. As for pushing the machine too fast, the Z axis lead screw cannot be driven as fast as the X and Y axes. It is common when using Marlin firmware to to use a M203 g-code to limit the feedrate to avoid lost steps, and typically the Z max feedrate is 1/4 of the X and Y feedrates.

As for “calibration,” the usual progression is:

Everything I am using on the machine came from Ryan, my board is the Rambo 1.4v2 or something like that. I am also using the firmware for the board on this forum also.

I was just looking at some videos on calibrating the machine because I never knew that you had to calibrate anything at all. I intend to check the travel on the X/Y axis when I get home. If I notice that 100mm is not 100mm I will have to make that adjustment on the LCD panel I am assuming?? I am not looking at the machine to verify since I am at work.

Thanks again I do appreciate you guys!

If you find a problem, look for a mechanical issue and not make any firmware changes. If you purchased everything from V1, then mechanically it should be accurate. When movement is off, then typically the wrong parts are used or something is binding. For example, using a pulley with a different number of teeth, or using a 1 start instead of a 4 start lead screw, or having a loose grub screw, or having something binding at a certain position that is resulting in lost steps, or using steel reinforced timing belts. The steel breaks resulting in uneven teeth placement on the belt.

Evidence from people who have tried both a router and a 300 to 500 watt spindle find the router more powerful. According to the posts I’ve read, you will need to step up your spindle to more than 500 watts to beat a trim router like the Makita RT0701C. Here is a recent post on the issue. I also read that runout can be an issue with the cheaper spindles, which would be a problem with aluminum. Not saying you’ll have this problem, but it is something to watch out for.

In terms of calibration, you have to take the kerf of the tool into account, and it may not be the nominal diameter. This will partially depend on the runout of the spindle. Some of those Chinese spindles have a fair amount of runout.

I cut some outside and inside diameters, which were nominally the same, and measured them carefully. I determined that for my 1/8" single flute endmill, I actually get a cut that is just a hair over 3mm, such that I very much get the dimensions that I want if I define the tool to be a 3mm diameter in Estlcam. I still have my steps/mm set at the default, which is based on the belt having 1 tooth every 2mm. From this I surmise that my belt tension is neither slack nor too tight.

I just looked at the Makita router and it is indeed a bit more powerful and power is what I am looking for so it won’t bod down easily. Looks like I will have to go that route since I always wanted to get one of those Makita routers. You guys are killing me, now I have to print some new mounts for this router.

When using the Makita do you run it at full blast? Or would you just do a test and see what speed will cut aluminum compared to wood etc.

When using the Makita do you run it at full blast?

It depends on what I’m doing.

THe nice thing with the Makita speed control is that you get the same POWER at different speeds. It isn’t a throttle on the power, it is a speed control, so it will deliver more power to keep the speed up.

For harder materials, I tend to find that I decrease the feed rate and decrease the speed to keep the chip load similar. Experimentation is the key there to find the best way to go.

I am comparing the Makitas and I like the 2-1/4HP, it looks like its really big and heavy. I rather have more than I need just in case something changes down the road and I am stuck with something smaller.

Dan, what are your thoughts on this one? Is it worth it?

Is this the mount that you are using for the Makita on the Primo 25.4mm. 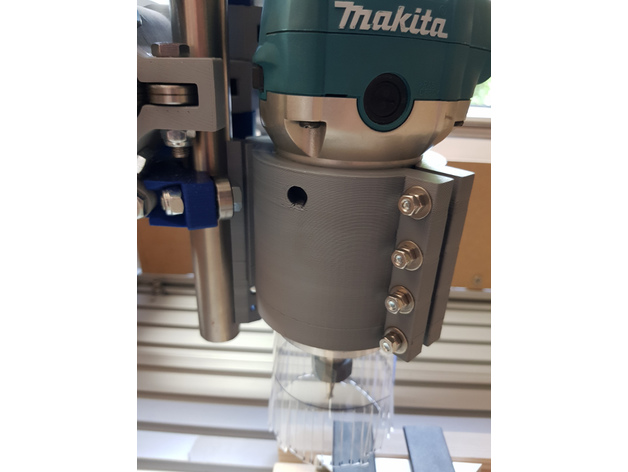 For more stability I have merged the MPCNC Tool Mount with a Makita Tool Holder. It fits with the 25mm version (metric). This Tool Mount can be used for MPCNC Burly and also for MPCNC PRIMO. Using 2 parts connected via screws resulted in a "somehow...

I am comparing the Makitas and I like the 2-1/4HP,

Any mass attached to the core needs to be accelerated and decelerated, and this router is significantly heavier. You’ll likely have to slow your cutting down to use it, which offsets the added power, or you will have to upgrade your electronics to run your steppers at higher voltages. I’ve not seen anyone on this forum using this router, and I’ve never seen a mount for it.

Is this the mount that you are using for the Makita on the Primo 25.4mm.

Most people on this forum (including me) are using the mount designed by Ryan. You can find his mounts here. The one you point to has the potential to be stiffer, but it also adds mass to the Z axis. As with a lot of third-party parts and alternate solutions used on the MPCNC, there are few side-by-side comparisons to figure out which solution is better.

Most people on this forum (including me) are using the mount designed by Ryan. You can find his mounts here.

Thank you sir. I need to print this once I get home,

Keep in mind also. The forums is full of people who are having problems and a common forum post topic involves skipping steps or not having good travel distances. But most people who have good travel distances and don’t skip steps don’t open troubleshooting posts about it. So it may not be actually common. I see a lot of people getting great results without any hiccups, but I have no idea what is the most common outcome, honestly.