I am making progress to turned wooden bowl embellishment. I built a simple, inexpensive rotary axis from a geared Nema17 stepper 5.18 : 1 ratio, an 8 mm shaft, a couple of bearings and a plain 1” bolt I drilled on my wood Lathe for the 8mm shaft. It was easier, as Ryan has said, to drop that part of the table than to have spindly legs for the MPCNC. Figuring the steps per mm that Lightburn requires was essential. Otherwise my 3 watt LED laser burns like a champ. The depth of focus is about 6mm so for now flatter parts of the curve work better. Eventually I will find or invent a way to have the LED laser follow the curve to maintain the focus. This is a test piece of birch on a standard 1” 8tpi chuck commonly used on wood lathes so I can turn it, burn it and finish it without rechucking. I’m running GRBL on an Arduino Uno for Lightburn rather than on my Rambo board since I’ve found it much easier and quicker to reprogram the GRBL parameters when I need to. The current GRBL version also has a useful laser mode. I simply plug the rotary axis into the Y stepper driver. To hold the Y axis steady I could plug the Y steppers into the A axis but with the laser it isn’t necessary. I can lay the rotary axis on it’s back to engrave a platter rim or base. I haven’t implemented the camera feature of Lightburn yet but that would make a lot of things very easy. I figure it is a simple, cheap, useful, and effective solution to do what I want for now.

Next step is engraving or piercing a bowl with the router but that will be on a stiffer CNC machine I’ve built, with a similar rotary axis and a little stronger NEMA23 stepper to resist the rotational forces. I’ll try that in a few days. 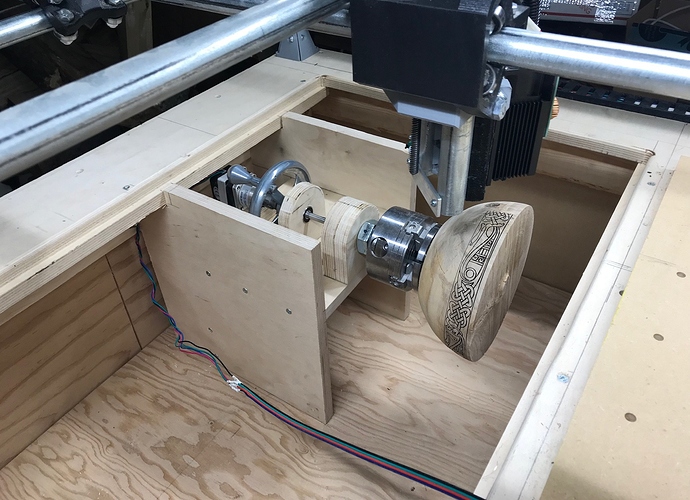 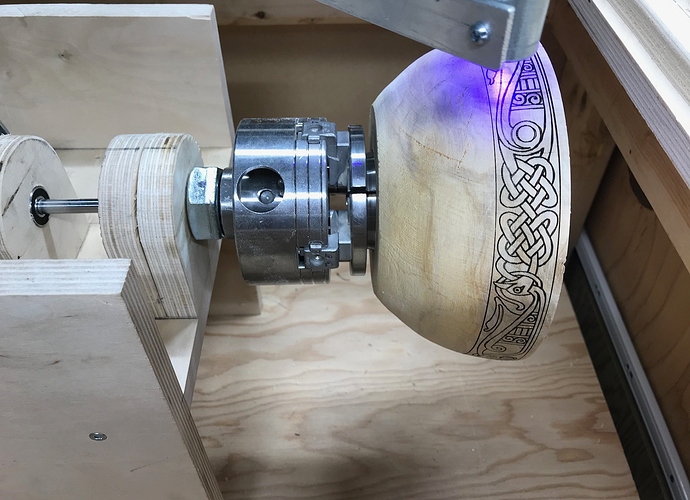 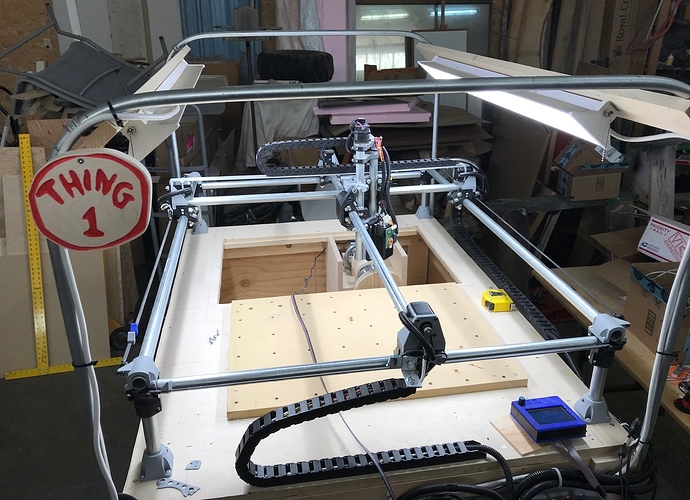 That is so cool! Adding a rotary axes is on my “to do in the next year or so” list. Nice build.

The nice drop table, Light brackets from conduit, rotary lasering…Okay I give up you win! Super cool project.

Thanks. I had to add the 3ft LED lights when I was learning about printing last summer. I couldn’t see much detail with glossy back plastic. They really flood the table well. Regular 1/2” conduit and a conduit bender. 1” x 3” boards to brace the tops and screwed at the top with conduit brackets. Cheap and effective.

My rotary axis is due for another modification to allow it to pivot.

I’ll attach a photo of a little test cup I did a day ago. I’ve since learned how to get rid of the double line effect in Lightburn.

I’ll be trying engraving with the router around a curve shortly on my other CNC built. I think I’ve figured out how to trick Estlcam into doing what I want, heh, heh. 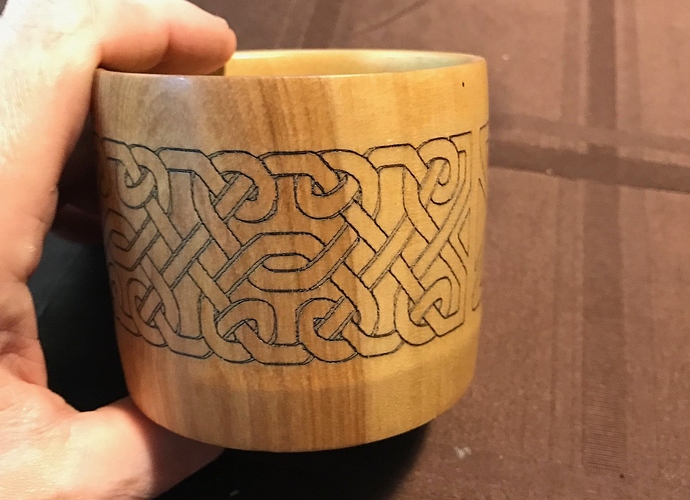 More progress to report. Laser work under GRBL as above.

Router engraving under Estlcam + Uno, mapping the pattern to the surface with Christians surface scan feature. 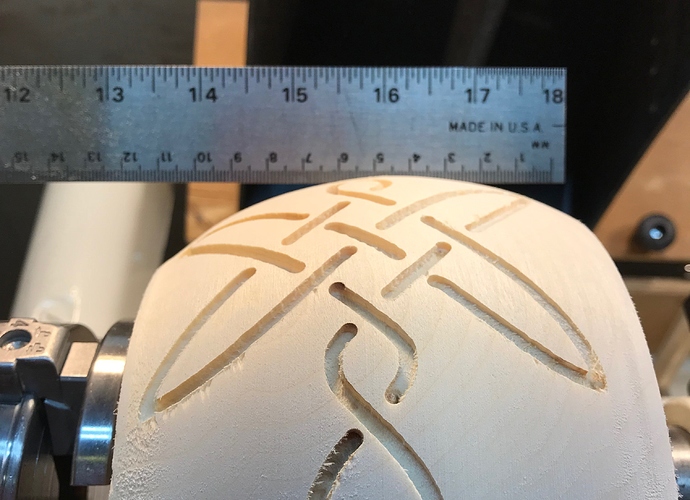 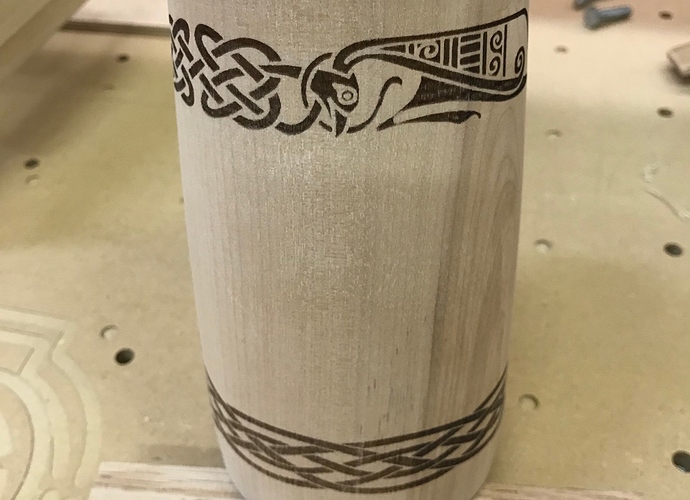 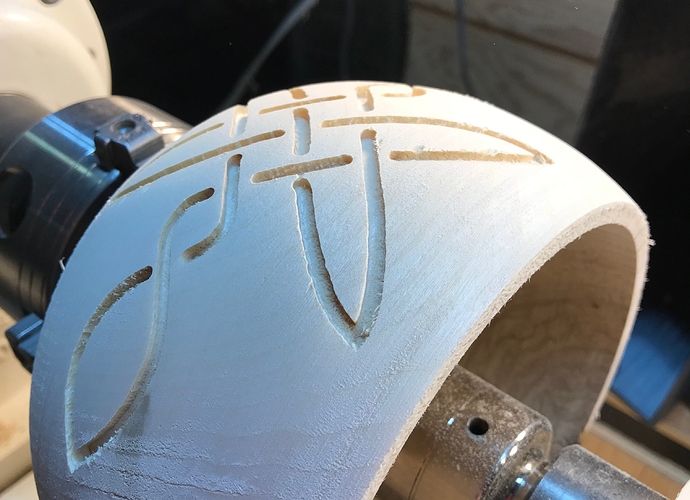 What did you use for a probe?

At the time I simply used some aluminum tape on the side of the bowl as one side of a ‘probe’ and an alligator clip to the router bit. I have mentioned that I use Estlcam programmed onto an Arduino Uno for simplicity. The probe leads plug into that. It’s a simple NO circuit.
I have since abandoned that approach for a much better one using Grblgru, Grbl-Mega-5X and an Arduino Mega 2560 board +/- a RAMPS board. The probe function and subsequent ease of making an STL from it are far easier. I made a very simple Z probe for that using a limit switch, a bit of wood, some wire, a pen spring and a couple of rivet heads ha ha. I posted a picture of that in this forum.

Hi Jesper. The probe leads plug into the top of the Arduino CNC shield board as on the picture I crudely marked below. The first and third blue pins on the shield board. You can attach a simple NO switch to them like a little limit switch. On the Inputs tab of Estlcam controller setup you can test the switch as well. Simply click it and one of the blue buttons will turn red, then you can change the name of that input to Probe. A pendant for Start, Pause , Estop and Reset can also be made with mo…

It is still working just fine.

You sir, are killing it.