So….I had this all set up and movin under its own power while in marlin mode on the TFT…I could spin the dial on any axis and all motors would move!

Then as I was starting to bundle up the wires and kinda make things neat and orderly the TFT display kinda flipped over the top of the router sled and hit the top of the table…I plugged it all back up and the screen would not light up…so I though we’ll dang I messed up the screen, and it wasn’t even a hard hit…fell like 3 inches to the top of the table! So I ordered new screens which arrived today. And of course I plugged one up and back light came on but nothing displayed…

So decided to plug up the original screen and boom…everything was being displayed again except now…it won’t go into Marlin mode it just displays this: 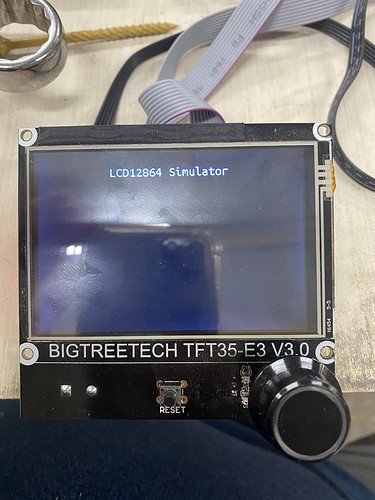 I also added a pic of how I got it wired to the board…please look at my setup and tell me if I need to do something or reload marlin or what??? Totally lost:

Well my other image is too large to load for some reason!

I should also mention then when it’s I. Touchscreen mode it just says no printer attached and won’t move anything from the move menu! Uugghh!!! That’s why I was using marlin mode cause at least I could get something to move!! 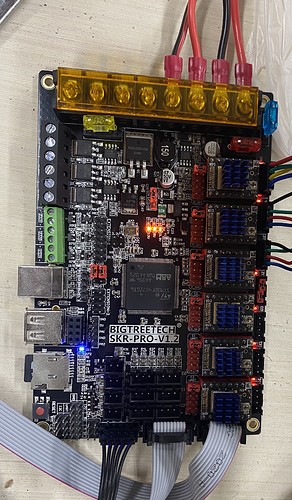 The gray cables are probably swapped or rotated.

I double checked them…they are plugged in correctly and exactly how the instructions say…but I will look at them again when I get home from dinner! Uugghh!!

Is there any reason why the TFT display won’t go into marlin mode fully?

mine functions but won’t go into Marlin mode. looks just like yours. i hope this helps me once it’s solved

They are really two separate systems.

On the reprap full discount display, Marlin sends each pixel to draw to the screen. Turning the knob and pushing the button changes Marlin, and Marlin draws the new screen and decides what to move or what setting to change. This is the LCD12864. All these comms go through the two 10 pins gray cables.

The tft has a processor built in. When in touch screen mode, all the graphics, the touch screen touches and the decisions on what gets displayed are generated inside the screen’s processor. When it decides to move an axis, it sends a gcode command over the serial port to the skr. Marlin doesn’t know it is talking to a screen. It could be a gcode sender, like repetier host, octoprint, cncjs, or the screen. All these comms go through the 5 pin black cable. Because the screen is making more decisions, the firmware running on the screen is more important. Because this mode uses a serial port, both sides need to have matching baud rates.

If you choose marlin mode, you are asking the tft processor to pretend to be a lcd12864. Marlin takes control of what to draw and the screen just does what it is told. If you are getting a black screen in marlin mode, it is because the commands from marlin telling the screen what to draw are not making it to the screen. This is because either the skr or marlin is broken, or because the cables aren’t right. In this mode, the gray cables are the only ones doing anything. If you wire them backwards or flip them, they won’t hurt anything. But they will not draw anything on the screen.

In summary: to fix marlin mode, make sure the skr is running and the gray cables are connected the right way

To make the touch screen mode work, make sure you have the v1 screen firmware installed and the baud rate set to 250k.

If I boot mine fresh, everything works. If I use the reset button, it sometimes goes to the “no printer attached” and neither touch screen nor Marlin mode work anymore. A cold boot fixes it all.

So, if you go to touch screen mode, does it stay at “No Printer Attached”?

Ok so after I flashed the screen and then the board…double checked my connections and now I’m back to where I was initially! I can now move all axis’s in marlin mode but it still says “no printer attached” in touchscreen mode! Wired in series for all stepper motors…

I should at this point also note that my main objective is to just get this thing up and running and draw the crown for starters before I start carving up anything! Which I suspect is everyone’s initial goal! I feel like I’m so close I can taste it…am I?

On a side note, I now have an extra SKRPro 1.2 and 2 REPRAP screens! Lol…I’ll keep them as backups!!!

Is there anything stopping me from running the crown test at this point? I know I need to load it up in estlcam and then move it over to repetier host to generate the gcode….when sending the gcode to the machine am I hooked up to the board from a computer? Or can I load it on a card?

Don’t need with estlcam yet. Gran the gcode from here: test crown.

You can send the gcode from repetier or the sdcard in the screen.

Yes if the machine is responding and you have checked your grub screws you can run the crown. You can cam the crown yourself using estl cam or you can use the pregenerated gcode Ryan has made. Once you have the gcode you can either send it to the machine using a gcode sender (such as repetier host) or you can load it onto a card and run it from the screen. If you use a gcode sender like repetier host then your machine will need to be hooked up to a computer. Otherwise all you need is the screen and the card.