I been out of town for the past week on vacation, won’t be able to work on my machine for a while. But here in the club house at my families vacation property… I noticed something very interesting. I Built a “full size” low rider 2 for the 4x8 ft boards… I’ve played billiards a lot… like 4+ Hours per day for years… until about 2 years ago… I always wanted a pool table but my house isn’t that big to really house a table that size. I had planned on tearing down the table for the low rider when I finished building out my house. BUT THEN!! I realized the dimensions of the table are the same exact dimensions of a 9ft pool table!! I been pondering random designs… and i think

I can turn my low rider into a pool table/ cnc machine … that can cnc itself! I love vacation… but I can’t wait to get back home to realize this idea. Basically the same idea of those pool tables that turn into dinning room tables… Back to looking at the ocean and mentally designing this thing.

Either way you use the table it is a good time!

It has been , that’s for sure! You designed an amazing tool, that can unlock a lot of possibilities, that normally wouldn’t be feasible for the normal Joe. This Quarantine bs came, and for me, has allowed me to reconnect with the architecture minor, the CCNA I got when I was 17… all those amazing experiences I have worked hard for, and ended up never using. I just made to much money slinging drinks, and no headaches at the end of the day… well maybe the mornings… but this project you put together. Came together for me at least. But it has opened up a can of worms. Luckily or un luckily, I got the time for, and enjoying every moment of it.

I’m just baffled, that I might just need to notch out a couple cm on well what is the most critical part of the machine… the rails it runs on… but I’m sure a little “flashing” or some 90 deg metal piece throughout the whole rail wouldn’t hurt. I did this on the cheap out of boredom. And it all worked perfectly. Have some minor issues I need to pan out when I get back to it. And that’s just across the 2 center pockets, which are actually smaller then the corners… I have plans for the pockets, and the ball return system. To double as a vacuum… for the bed / wasteboard

If I had this planned out from the start. Then I could have just bought longer stainless tubes… instead of machining them perfectly to the recommended spec. Hopefully I will have some updates in a few weeks. To be honest I might leave vacation early… my dad still drinking Undercover with the “boys” and hasn’t realized that I’m 35 years old and sell that shit for a living

… I just hope he brings me a drink soon. I won’t hold my breath on that tho.

Woo, just got some interesting news from my home built security system… old iPhone and esp32… 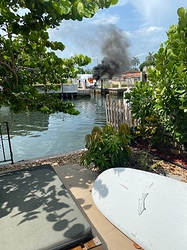 Hope he had insurance … or does insurance hope they didn’t have him… I knew I should have put the two 160 gb HDs I pulled from the cable boxes I took apart to use… why would I Use 160gb IDE drives to connect to my network, when I got sd cards that are higher… I could have had the whole thing on video… that’s why!.. the clouds. Are always The best , for data storage. But when it comes to security you need a redundant system! As a pilot, as a son of a metal and composite shop owner/operator. Always!! Have a redundant system. It sounds like it is, repetitive.for everyone’s safety, and for your own protection. Make sure, you have a back up plan. Always, for moments like this.

Hmm might not be able to do the 9ft size because of side pocket size… but 8ft would fit . From what I’ve researched … size really isn’t an issue as long as it’s 2:1 ratio on l:width … im just a sucker for 9 ft tables, less ability to just pound em in. Now… I’m thinking I don’t even have to play alone, can I get the low rider to play against me🤔 put a little actuator on the plate with a servo … I can’t program it to good… otherwise I’ll lose interest like playing chess with that freaking yahoo chess app, took the flavor out of chess for me. If anyone’s ever built a pool table before and has a cad design I can some how morph into this thing would be great. Everything I found so far is not so good… and is made in traditional fashion, didn’t bring my laptop with me so it’s hard to design things on the phone. 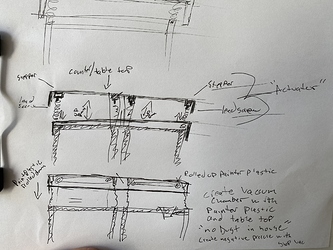 Having the table top super thin just made of a vaneer or something thin with some slats . If you cut it in half each half can go up on its own… if you don’t want to use the whole capabilities of the machine just leave half under negative vac to remove dust. And still have table space to work… pool table is in same frame , just under the waste board, which could go up, or just be removed and put to the side when you want to play… clearly you couldn’t have the actuators in the way ( they would be coming out of the pocket system. I did think of just putting some sort of pulley system on the ceiling with a winch or something get the same effect. The under side of the veneer top counter / which houses the plastic to create vac… could have some lights , and hold the cues , so when lifted it acts like the lighting for the table as well

Don’t get me started on what’s going on underneath the table… I think I’m just going to turn this thing into a modular unit. That will have under counter fridges freezer. Dishwasher if I want but I mean I ain’t fancy like that… throw my hot plate in a drawer down there … and just eliminate my “traditional kitchen” completely and just have it all housed under the table. Alowing more space around the table to actually have space for cue “shooting” I got some extra tiles from when I laid the tile… pop one or two out throw the pipe down there… probably super not code… but then I thought that the pulley system could actually be cable driven… like a winch… just throw some power through it to connect the power to the unit.

Hopefully my neighbors got the things I ordered, got a shitload of nichrome wire to make heating element … even tho I do have that bullshit ikea shit… and to be honest I have a full size flat stove top I got in some garage sale… just seems to be nichrome … wound up… having a cnc machine really allows you to do whatever the fuck you want. I think

I can make a spindle for a 5th axis if I take the waste board out. And just let it spin. Extending the 3.56 max to actually whatever the circumstances of that is or is it radius …