I built the 1st version of this MPCNC back in the summer of 2015. After having some problems with my z-axis recently dropping twice while cutting, I have decided to reprint the parts for the upgrade & use the M8 leadscrew instead of the 5/16" threaded rod. I had replaced that plastic part that holds the 5/16" nut & tightened it twice, but still dropped a little during my last test cut. A couple days ago, I was dreading these long print times so I decided to look at changing the Marlin 1.1.8 firmware on my Makerfarm 10" Prusa i3v to klipper firmware. I had tested this last December, but was not entirely happy with it so I saved my settings & went back to Marlin until now. Yesterday after making an image backup of my Pi3B+ with octoprint on it, I installed klipper from https://github.com/KevinOConnor/klipper . Since most of my configuration settings had not changed, I did not have to make much changes to the configuration file. After going thru the pressure_advance calibration tests, I printed the C-Z-Lower.stl, then the C-Z-Motor. Before going to bed I started the long print of the C-XY.STL & it finished before I woke up. I had printed the C-XYZ_T8.stl files before changing to klipper. Based on the print estimate times of Slic3r Prusa Edition, that long print was 30% faster (9:24 actual print time). I really like the idea of letting the Raspberry pi do all the hard work & just having the 8bit electronics on the 3d printer do the simple stuff. If you are not familiar with klipper, here is the page on it’s features. https://github.com/KevinOConnor/klipper/blob/master/docs/Features.md

I still have some waves in the sides, but not sure what else to change there. I tried acceleration at 800,1000 & 1500 with little difference. I might try 3000 just to see how it looks. I have never had sharp corners before, so am really happy with that. I know marlin has similar feature to the pressure advance, but I don’t think Marlin can do the smooth acceleration/deceleration calculations that klipper does. After I use the firmware more, I plan to change the firmware on the Folgertech Delta to this. I am using an MKS 8bit board on that machine & this firmware should really speed that machine up.

I am using esun PLA+ Silver 1.75mm plastic with e3d lite hotend & titan extruder. If I run out of silver, I will print the rest of the parts in either brown or black since that is what I have on hand. I really like the PLA+ because it has a little bit of give to it.

I attached photos of the parts I have printed so far & the test prints from the klipper firmware changes. 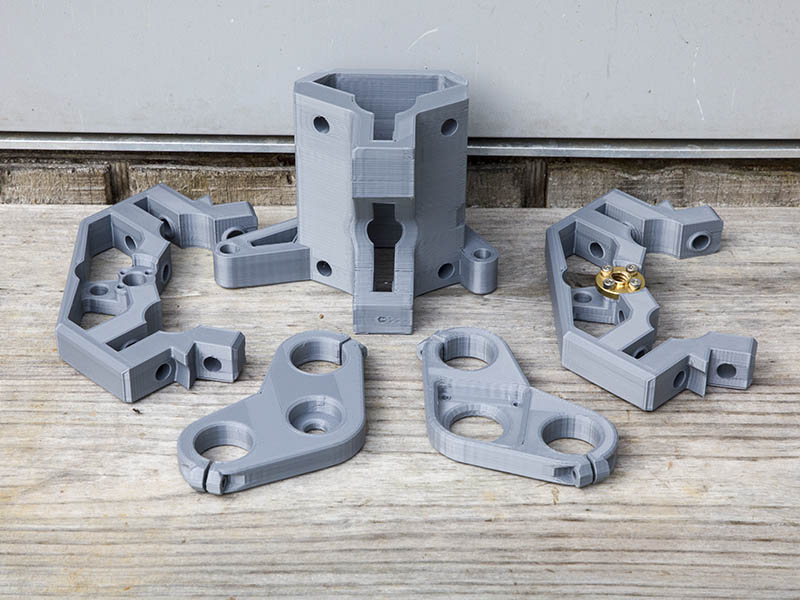 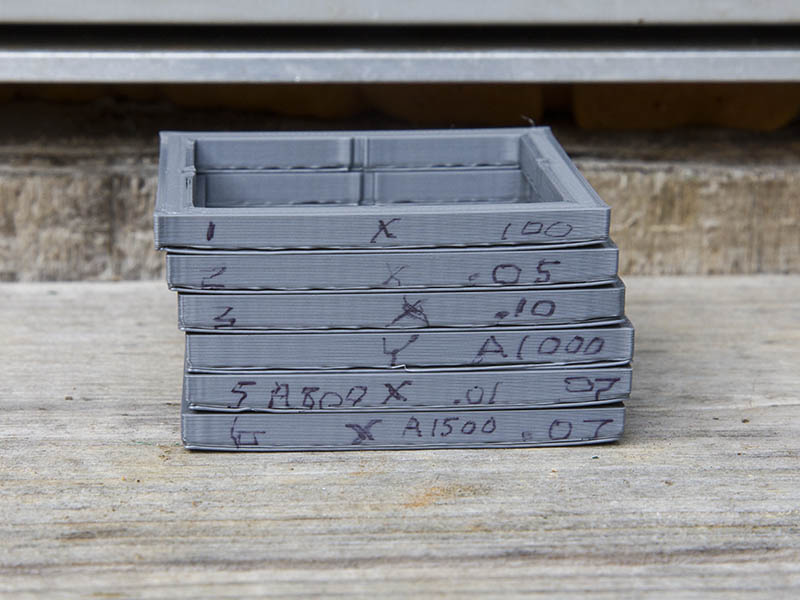 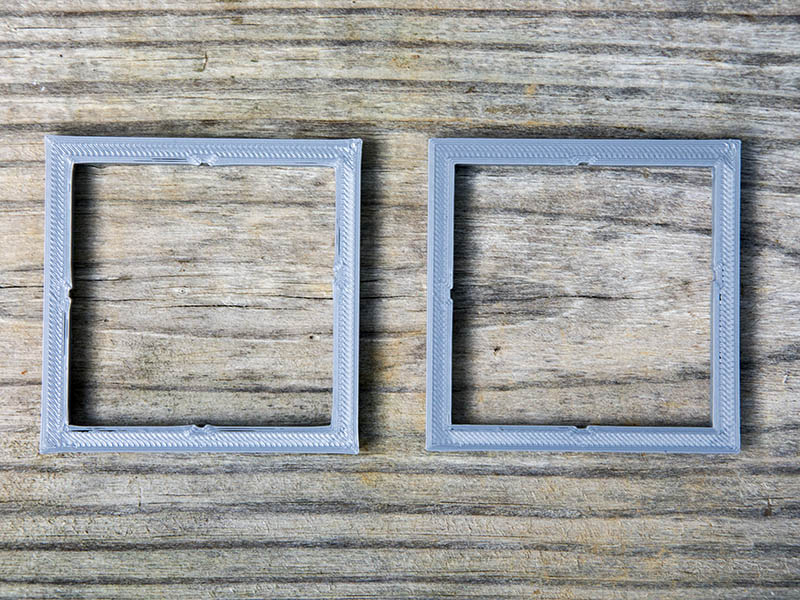 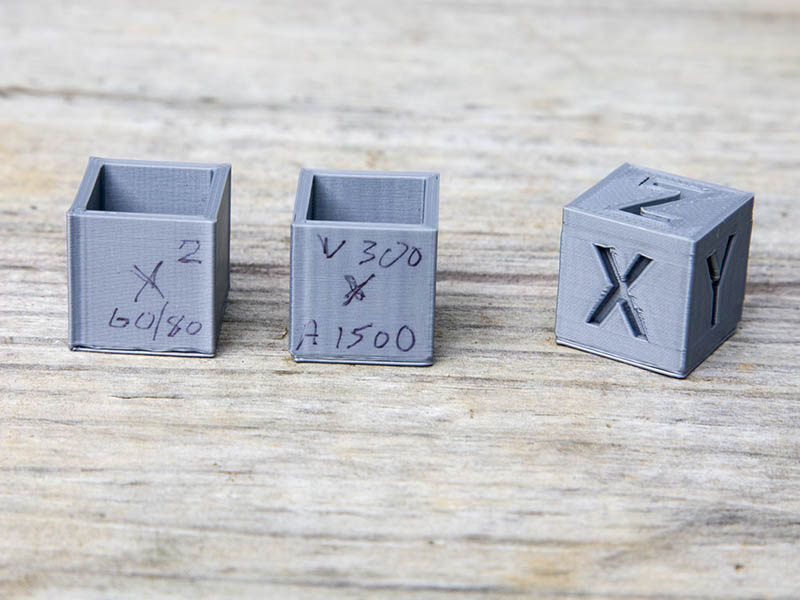 I like it. I think that klipper has a real chance of being a standard. Marlin has so many developers helping out now it is hard to keep/catch up. Once a few more people get into klipper that Pi horsepower could be unmatched I would assume, then back to dumb cheap driver boards!

Marlin does now have two acceleration options, even on 8bit boards. I guess someone went in an streamlined the equations in assembly to work so it has the same S curve capabilities, and equations as tiny G. From what I understand and have read.

Dui has been messing with linear advance of the extruder as well, looks really promising.

Hardware wise printers in my mind have plateaued a bit, and now the software is really getting an overhual, how exciting when we get “free” upgrades! Better accelerations, Gyroid infill…

The last test cube looks pretty good. A few months ago I spent a almost a week trying to tune my accelerations and things and I never got very far. Such a wide range of settings worked and I couldn’t seem to really get things dialed in. Just a few days ago I found out my slicer has some “advanced” features That make it pretty fool proof but also make it difficult to tune. So turns out I need to try tuning again but turn off all the features for tuning. It never used to be this hard. Seeing your progress is pretty inspiring. I need to do some tuning as I know my Z jerk is wayyyy to high so while I am at it I want to really tune it, then maybe some MPCNC and LowRider tuning.

PS…I think you are going to like the “new” parts!

You have been here since the beginning. To know you still poke around here is pretty amazing to me. I don’t really follow along with other machines but I am sure you guys are looking around. So to know for whatever reason you are still here inspires me to keep improving to not lose the good guys to other machines. Just wanted to say thanks for the little confidence boost this morning (and all the other times I see your parts and comments popping up).

I did consider going to one of the openbuilds machines, but the small cost of around $50 to upgrade my current machine was the deciding factor for me. Thanks for keeping this project going. I am still debating on whether to change the corners on my machine also. Think there is only a 1.7mm difference in height between the x & y pipes. I may see how it looks when I get to that point before deciding.

The open builds ecosystem seems awesome in how it’s easy to make it your way. I like that. I wouldn’t mind putting my spin on a build. I did get to play with one at MRRF this last visit. Of course I see things I would tweak a bit, but I would have to try it there way first.

Think there is only a 1.7mm difference in height between the x & y pipes. I may see how it looks when I get to that point before deciding.

For the “C” version the gaps should have stayed constant, if that is what you are referring too.

Shouldn’t be. I just checked. On the very first corner I ever made it was 27.6, the newest is 27.5. I am almost positive on the second version of the (five or so revisions) I fixed that dim to be 27.5

I was butting the Bottom_Corner & Top_Corner right against each other & after looking at your photos I guess there is a 1.5mm gap between the plastic parts after putting them together. Is that correct?

Yes, there is a gap, not sure of the exact size.

geodave wrote:
I built the 1st version of this MPCNC back in the summer of 2015

You have been here since the beginning. To know you still poke around here is pretty amazing to me. I don’t really follow along with other machines but I am sure you guys are looking around. So to know for whatever reason you are still here inspires me to keep improving to not lose the good guys to other machines. Just wanted to say thanks for the little confidence boost this morning (and all the other times I see your parts and comments popping up).

Wait… There are other machines?

Here is a timelapse of printing that C-XY-STL file. I could not get the octolapse plugin to work for me, so I just had octoprint take a timelapse every 30 seconds.

I disassembled the center section of my MPCNC yesterday. Since I was throwing these plastic parts in the recycle container, I used a soldering gun to cut them so I did not have to disconnect one end of the X & Y pipes just yet. Here is a photo of all the parts I took apart as well as the tools I used. 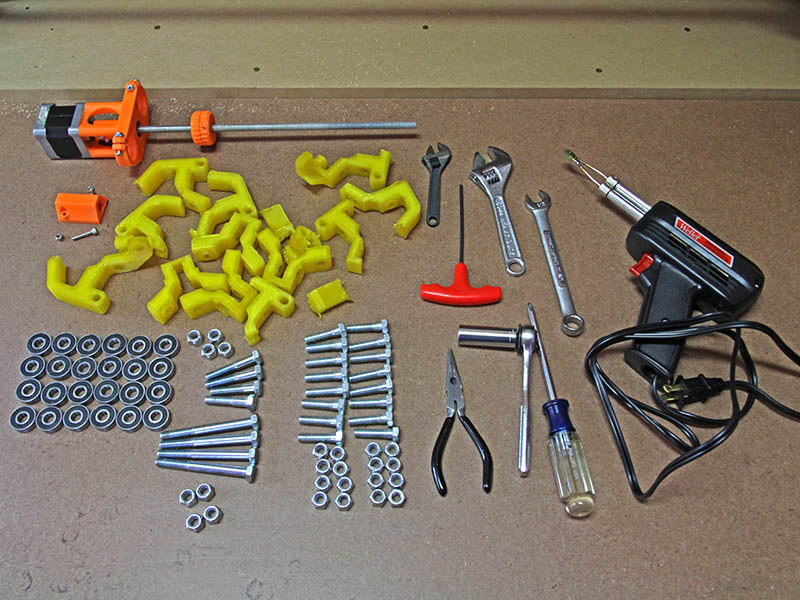 I don’t think PLA is recyclable (although I have heard it’s commercially compostable). I’m also not sure if they will actually recycle it if it doesn’t have the recycle symbol, since it’s not easy to mechanically sort the different plastics (it’s done manually, usually). I have a friend that’s working on for a company building recycling center robots using a computer vision solution, it’s pretty interesting, actually.

I was at a 3d printer meetup in Charlotte, NC area a while back & a guy that worked for https://www.makeshaper.com/ said I could just throw the used PLA in my recycle container, so that is what I have been doing for the last year or so. I will have to check into that to see if I am doing more harm than good.

Let us know if you find anything out. I’ll ping my buddy about it too.

I do not see it on any of the recycling websites in our area, so guess that guy told me wrong. I will just start throwing it in the trash I guess.

Here is the progress I made yesterday. I printed the pineapple coupler, but then decided to customize the coupler I made a while back. I just have to put all the parts back on the machine now. I have been exploring this ringing on my 3d prints and have seen a few posts in the klipper facebook forum about using tooth idlers instead of smooth idlers to fix that, so I ordered 4 couples from china (2 spares in case I get a couple bad bearings). I was going to order them from here, but Ryan did not have the 20t that I needed. On that note, is it really necessary to have the same number of teeth on the idler as the drive pulley since this just spins idley? 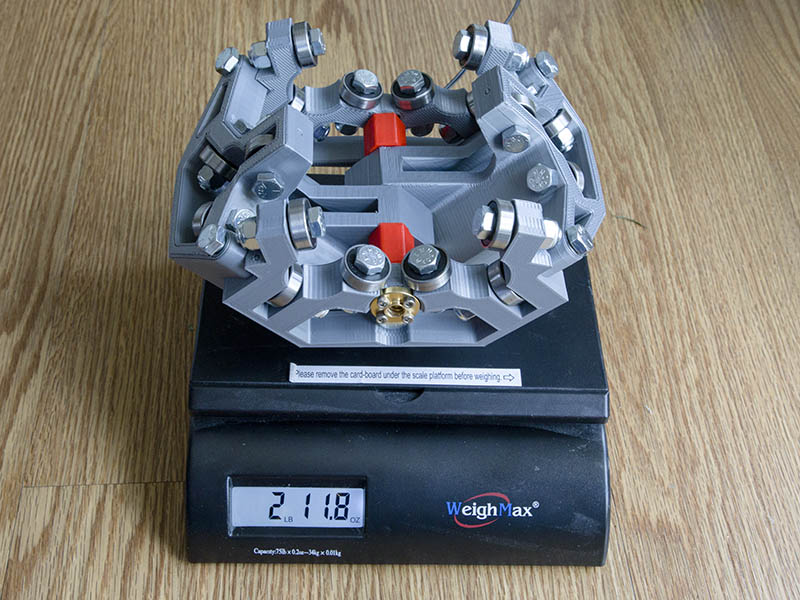 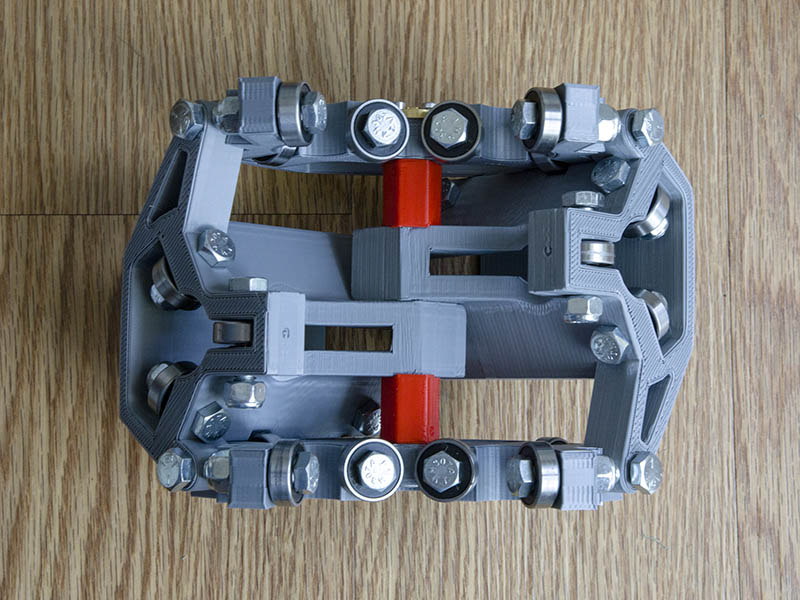 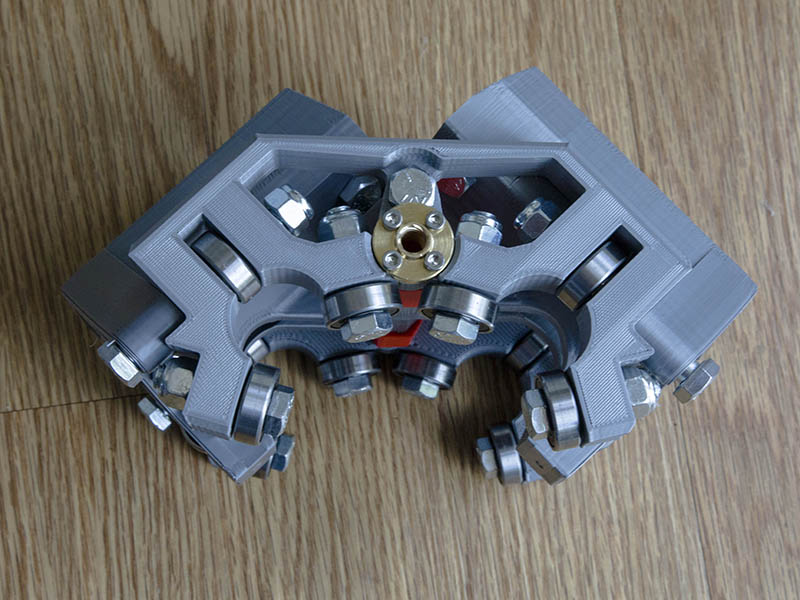 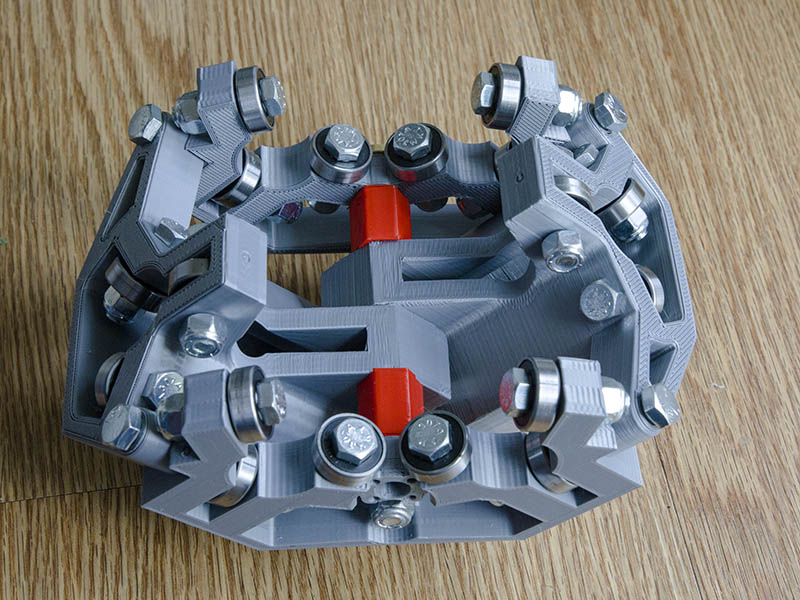 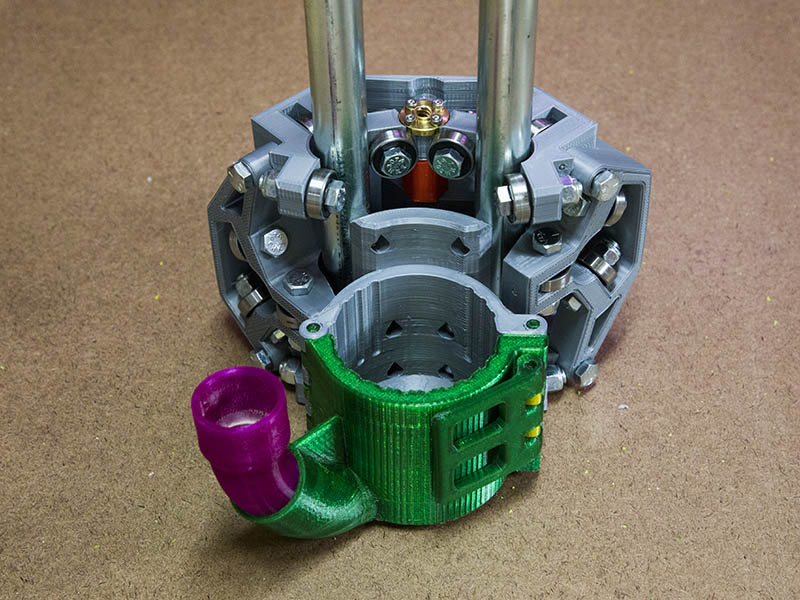 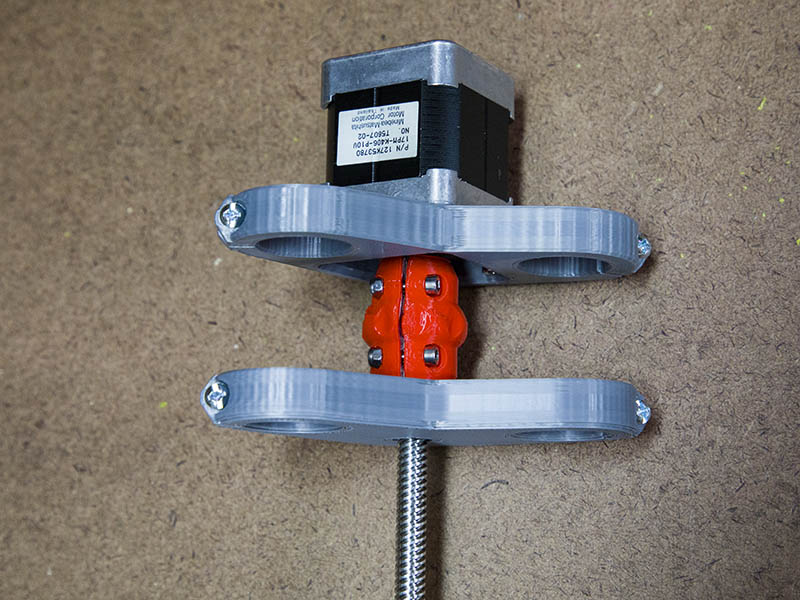 I pretty much finished putting it back together today & the center section feels rock solid. Thanks Ryan for redesigning that a while back. I should have upgraded to it a long time ago. I updated the firmware to the M8 Leadscrew & the X, Y & Z all move properly. I just need to figure out some wire management for the Z motor as shown in the last photos. I used the clip_on_z.stl from https://www.thingiverse.com/thing:941605 on the old style. Anybody have suggestions for this. My 1st thought is to change the C-Z-Lower.STL to have these connections on it. 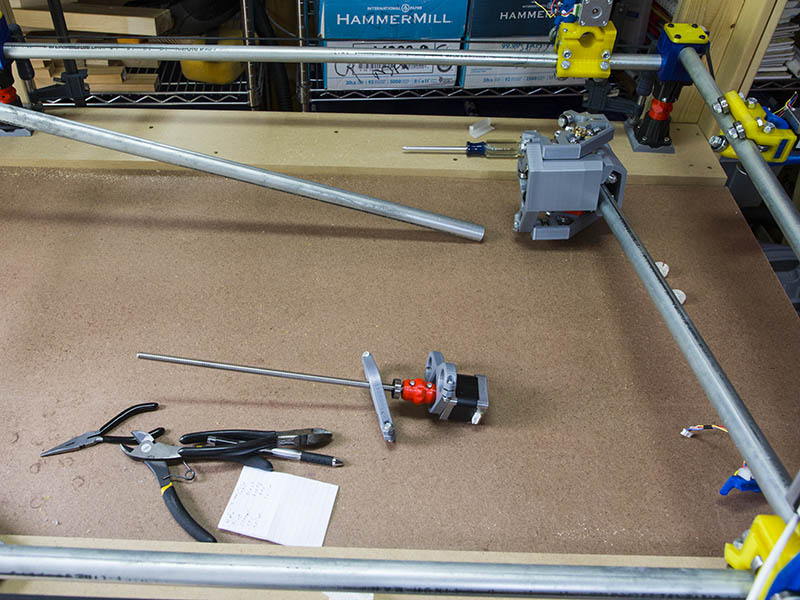 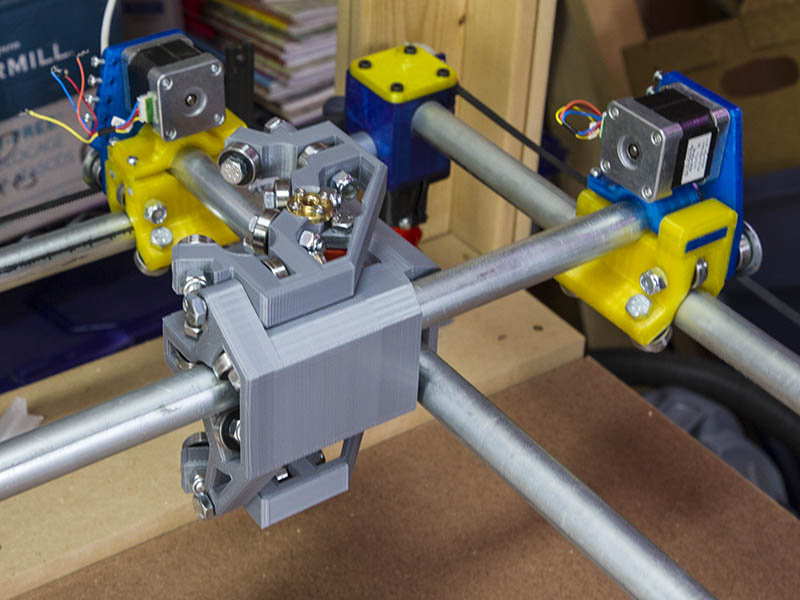 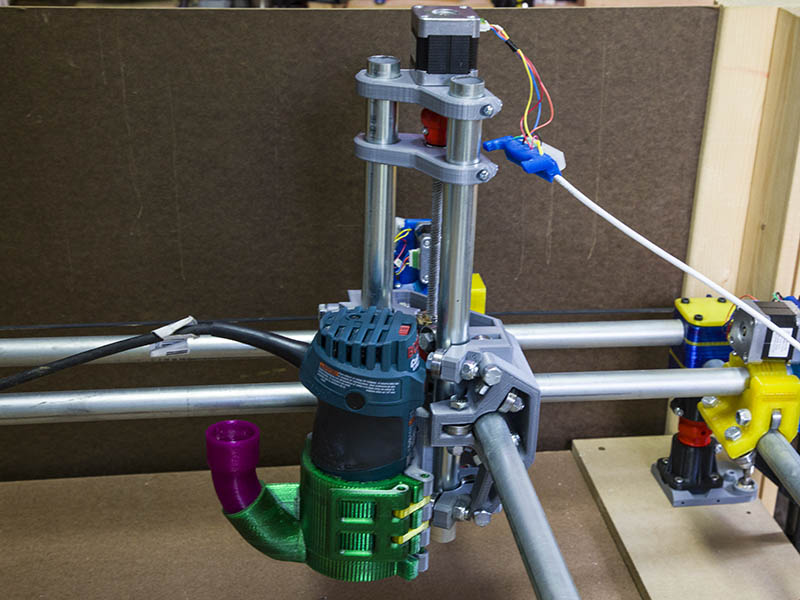 I bought the new wiring kit, but since I did not realize I needed more wires for the motor connections, I am using the old way & needed a way to connect the Z motor wire connections. This is what I came up with for connecting the motor wires like we did on version 1. Seems like it should work, be solid enough & not cause any interference. I still need to chamfer the bottom & top edges which is usually a little pain in openscad. I overlaid the original design in gray. I cut a little more plastic to keep the volume about the same as original. 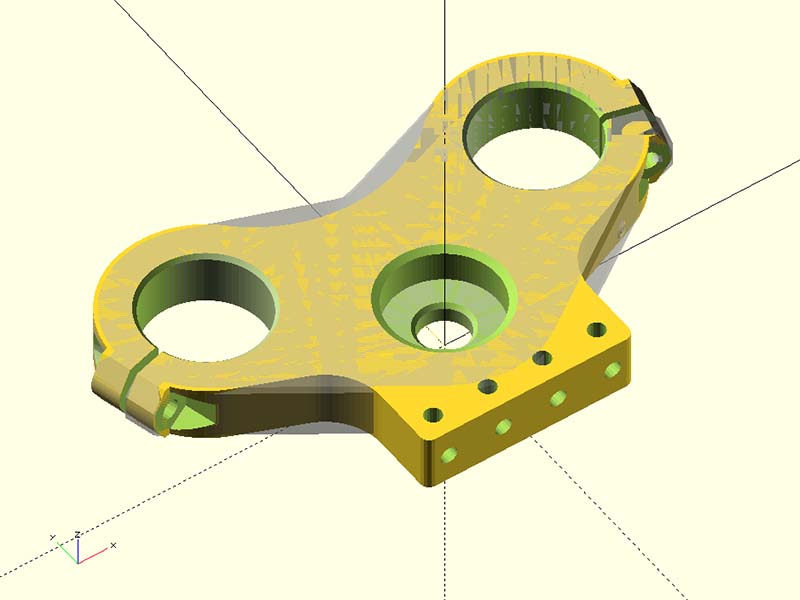 I would add one more little loop or hole somewhere to be able cable tie it to keep the connections safe.